Eruption at the main peak of Eyjafjallajökull 2010 in Iceland 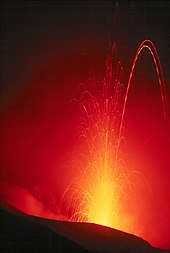 Under volcanism means all geological processes and phenomena associated with volcanoes are related, d. H. associated with the rise of magma from the earth's mantle to the surface of the earth .

The term "volcano" is derived from the Italian island of Vulcano . This is one of the Aeolian Islands in the Tyrrhenian Sea . In Roman mythology, this island was considered the forge of Vulcanus , the Roman god of fire.

As a rule, volcanism is linked to tectonically active regions, such as subduction zones or mid-ocean ridges - but magmas also emerge from greater depths at atectonic stationary hot spots (e.g. Hawaii , Yellowstone ).

Changes in chemical composition (e.g. water content) and pressure (pressure relief) lead to partial melting of the rock ( magma ). The liquid material usually collects in the so-called magma chamber . From this the volcanoes on the surface are fed through narrow ascent paths.

Volcanism encompasses all forms of emergence of the material as solid ( bomb , lapilli , pumice stone , ash ), liquid ( lava , lahar , geyser ) or gaseous ( volcanic gas , fumarole ) substances. It is not uncommon for mixed forms of the eruptive side effects to occur, such as B. the devastating pyroclastic currents . The depth equivalent of magmas not leaked to the surface of the earth are plutonites .

Volcanoes are among the most impressive manifestations of geological and geodynamic processes, not only on earth , but also on other planets and moons of the solar system . This extraterrestrial (non-terrestrial) volcanism includes the sulfur volcanoes on Jupiter's moon Io , the cryovolcanoes on Neptune's moon Triton and the extinct volcanoes e.g. B. on Mars and Venus .

Volcanism contributes to the most serious natural disasters on earth. Many of the tremendous upheavals in the history of the earth can be attributed to him, not least because of his considerable influence on regional and global climate developments with the resulting consequences such as famine . Volcanic disasters can affect the human population directly and indirectly, through destruction near an active volcano or through global climatic changes and ash fall. On the other hand, the direct and indirect consequences of volcanism form the basis of life for large parts of the population through high-yield volcanic soils, building materials, geothermal energy and tourism. Around a tenth of the world's population lives in the direct sphere of influence of active volcanoes. Volcanic observatories observe, register and analyze the activity of active volcanoes in order to be able to issue predictions and warnings (this has been done largely with success in recent decades).

Volcanoes play a role in the mythology of many cultures.