Fumarole in the Kaldaklofsfjöll , Landmannalaugar , Iceland 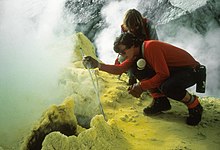 Sulfur fumaroles on the crater rim of Vulcano

A fumarole ( Latin - It .; Plural: fumaroles ) is a volcanic steam outlet in the area of volcanically active areas. Mostly water vapor and sometimes volcanic gases are emitted .

Fumaroles arise when there is little water in the depths. Due to the lack of pressure, the water is completely converted into steam before it exits . Fumaroles are classified by the temperature and type of gases they emit. The temperatures of the gases can be between 200 ° C and 800 ° C. Most fumaroles excrete pure water vapor, but often other volcanic gases also escape, some of which are deposited at the point of exit. By oxidation and thermophilic (heat-loving) bacteria occurs as the characteristic of Fumarolen colored staining. Exhalations rich in sulfur compounds like hydrogen sulfide are called solfataras ; Carbon dioxide exhalations are called mofettes . In the vicinity of mofets lying in depressions, the carbon dioxide can accumulate, as it is heavier than air, and thus lead to death from suffocation in animals and humans .

Through changes, fumaroles can indicate volcanic activity. If their temperature rises or the composition of the escaping gas changes drastically, this can be an indication of a new volcanic eruption . For example, the temperatures of the fumaroles on the island of Vulcano , which has been quiet for over 100 years, rose from 300 ° C to over 700 ° C between 1986 and 1993, which caused great concern. It was only when the temperatures dropped again that the all-clear could be given.

As a rule, fumaroles, like the other exhalations, are post-volcanic phenomena; their existence then suggests decaying volcanism .