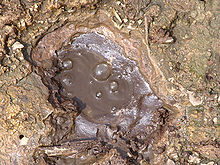 A mofette is the exit point of carbon dioxide (CO 2 ) with temperatures below 100 ° C. It is thus a subspecies of the fumarole and is regarded as a side effect of volcanism .

The name Mofette is derived from the Italian word mofeta , which comes from the Latin mefitis or mephitis . It means something like "harmful exhalation".

In addition to carbon dioxide, mofets can also contain methane and hydrogen sulfide , and traces of helium and other noble gases . They can chemically change the surrounding rock at faults. Hydrogen sulfide results in a rotten egg smell.

Mofettes can have different external appearances depending on the surrounding soil and the water outlet from the spring. The spectrum ranges from dry gas springs to mineral springs containing carbon dioxide. Relatively dry mofets with little or no water leakage can look very similar to mud pots , especially after rainfall ; they are repeatedly incorrectly referred to as small mud volcanoes .

If mofettes are drilled and piped (i.e. a stable channel is built), a cold water geyser can form under certain conditions . However, cold water geysers are mostly at least partially human structures.

Plants die in a mofette location or are significantly inhibited in growth. The ground is often free of any vegetation. In Central Europe only a few plants tolerate the location. These include marsh plants like the reed , which adapt to the oxygen-poor soils. The swamp sedge grows in a mofette area only in places with extremely high gas concentrations.

Animals are mostly found dead or dying in mofett areas. Often other animals perish if they suspect safe prey in the animal carcasses and stay in the mofette. It has been observed that the mounds of earth and the associated underground tunnels of moles end at the outer limits of a mofette, where the carbon dioxide concentration is still low enough.

The carbon dioxide released from mofettes can collect in sinks and displace the air. In the morning in particular, there are high concentrations near the ground. When the sun warms the ground, it rises and the concentration drops rapidly (example: the Bossoleto spring in Tuscany). In certain landscapes where the gas cannot flow away so quickly, a mofette can pose a threat to people and animals. Living things die after a short time from lack of oxygen or from acidification of the blood. Animal carcasses that remain undecomposed for a long time are therefore often found in the vicinity of mofettes.

A Mofette that has become known in this context is the dog grotto near Agnano (a caldera) in the Phlegraean Fields (Italian Campi Flegrei) west of Naples . It is so named because the carbon dioxide escaping in this descending grotto collects there because of its high specific weight and suffocates animals that have got into it, as has been observed in dogs. After the Second World War, walled up by the Americans because of the danger, the walling has now been removed and the grotto is secured against accidents by a steel grille.

Well-known mofettes in Germany are in the Laacher See and in the Kyll near Gerolstein (both in the Vulkaneifel ) and in the vapor cave near Bad Pyrmont as well as on the upper Neckar near Eyach , which were opened up with bores (the bores are now concreted over due to exhaustion from the Air Liquide and the remaining amounts of carbon dioxide are visibly looking for ways into the great outdoors). In the Eifel there are not only countless Mofetten but also the cold water geysers Geysir Andernach and Wallender Born .

The ratio between the isotopes helium-3 and helium-4 is taken as an indication of the depth from which the gases of the mofette originate. Changes in the isotope ratio, as they occur e.g. B. Measured in the Bublák Mofette on the Fleißenbach in the Eger Basin (Bohemia), are considered an indicator of geological activities related to volcanism. The temporal relationship between the swarm quakes that are typical here and the helium isotope ratio is currently being investigated by the Leipzig-Halle Environmental Research Center and the Potsdam GeoForschungsZentrum. It is also known that magma chambers close to the ground, including those of Etna, fill with carbon dioxide up to six months before an eruption . The gas dissolves poorly in the magmas and gasses up to the surface of the earth. Due to the increased mofett activity and the increased concentration of carbon dioxide, impending volcanic activity can be recognized.

Mofetten, like geysers, is of certain importance in earthquake research. It is often observed that the gas composition and the amount released during smaller foreshocks change due to cracks and fissures in the rock and can thus herald larger earthquake activities.

Other active mofettes can also be seen in Greece on the volcanic peninsula Methana (whose name probably comes from the gases = μεθάνιο αέριο - methane (a) gas), on the island of Milos , the island of Santorini and especially in the hydrothermal crater Stefanos on Nisyros .

The carbon dioxide emitted from mofettes is mainly used in water as carbon dioxide in mineral water and other soft drinks. The mineral-rich waters of the Eifel, whose spring carbonic acid is due to volcanic activities, are sold worldwide. At the end of the 18th century, carbonic acid was drilled to a depth of 500 meters. With a patent from Wilhelm Carl Raydt in 1880, it was possible to liquefy the carbonic acid obtained and thus facilitate storage and transport.

In order to extract carbon dioxide, the gas escaping from boreholes or dry mofettes was initially collected with hemispherical metal domes and extracted with the aid of pumps. In the meantime, water is pressed into boreholes against the rising gas. If the water is sufficiently enriched with carbon dioxide, it is recovered in a separation process on the earth's surface.

Mofettes are used in balneology , i.e. in the form of healing gases, under controlled conditions . Source gas therapies are mainly offered in Romania , but also in the German state spa Pyrmont. The mofettes are framed, rebuilt and provided with stairs. Under medical supervision, patients take a seat at different levels depending on the severity of the disease. Low levels of carbon dioxide stimulate the circulatory system and improve blood flow.