Even in very low concentrations, hydrogen sulfide can be recognized by its typical rotten egg smell . He arises u. a. in the breakdown of sulfur-containing amino acids in the proteins of egg whites and yolks .

In nature, hydrogen sulfide occurs as a very variable component (from traces up to 80 vol%) in natural gas and in crude oil , as volcanic gas and dissolved in spring water . It also arises from the breakdown of biomass through putrefaction or putrefaction (e.g. animal carcasses, corpses, decomposition of leaf litter , sludge formation at the bottom of eutrophic lakes, etc.) or during digestive processes in the intestine , which it leaves with the flatus . The hydrogen sulphide that is produced during such biomass degradation in landfills , manure pits , high-pressure sewage pipes or other technical facilities causes billions in damage to concrete structures (biogenic sulfuric acid corrosion). One cause of the unpleasant halitosis in humans is - in addition to other volatile organic compounds containing sulfur ( methanethiol , dimethyl sulfide ) - hydrogen sulfide.

Hydrogen sulphide can be produced on a laboratory scale by dripping hydrochloric acid onto iron (II) sulphide in the Kipp apparatus :

However, the resulting product is contaminated by the starting materials with gases such as hydrogen , carbon dioxide , nitrogen and oxygen . When using natural iron sulfide (e.g. pyrrhotite ), the product can also be contaminated with gases such as arsine , monophosphine , hydrogen selenide , hydrogen telluride and the like. Pure hydrogen sulfide can be obtained by heating a concentrated solution of magnesium hydrogen sulfide or from the elements, including sodium sulfide and phosphoric acid .

In the petrochemical industry ( refineries ), hydrogen sulfide is produced in large quantities during the hydrodesulfurization of petroleum .

Up to 2.582 liters of hydrogen sulfide gas dissolve in 1  liter of water at room temperature .

Hydrogen sulfide is slightly heavier than air , under normal conditions the difference in density is about 19%.

Hydrogen sulfide liquefies under a pressure of 18.2 bar at room temperature. At 90 GPa, hydrogen sulfide is said to change into a metallic phase; H 3 S is assumed, which becomes type II superconducting at 203 K (−70 ° C) .

The H 2 S molecule is angled. The bond angle is 92.1 ° and the bond length is 133.6 pm. Because of the small electronegativity difference between the binding partners and thus the low binding polarity , hydrogen bonds do not play an essential role in hydrogen sulfide, which is expressed in the relatively low melting and boiling point .

The above recovery reaction is also reversible. Under natural conditions (pH 5–10), hydrogen sulfide can be bound in aqueous solution with iron (II) chloride to iron (II) sulfide .

This is common practice with biogas , digester gas and in sewers . The great affinity of iron to sulfur is used to purify biogas and digester gas. If it were to be used in gas engines, the sulfur dioxide produced after combustion would cause considerable corrosion problems.

In the presence of water vapor, it proportions with sulfur dioxide to form sulfur and water ( flue gas desulfurization , redox reaction ); with chlorine , sulfur and hydrogen chloride gas are formed . Hydrogen sulfide is also a powerful reducing agent .

The possibility of influencing this dissociation process through the choice of the pH value of the solution , ie being able to set the sulfide ion concentration arbitrarily, is the basis for the analytical separation of the cations after the H 2 S separation process. While the extremely low concentration of sulfide ions in acidic solution is sufficient to precipitate the particularly poorly soluble sulfides of the elements of the H 2 S group, the solubility products of the slightly more soluble sulfides of the elements of the NH 4 HS group are only achieved in ammonia solution . In the air , hydrogen sulfide burns to form sulfur or sulfur dioxide ( Claus process ), depending on the prevailing conditions . With fluorine it reacts to hydrogen fluoride and sulfur hexafluoride :

With the other halogens, e.g. B. with chlorine, it reacts to form hydrogen halide and sulfur:

Part of the remaining hydrogen sulphide reacts with the sulfur dioxide formed by comproportioning to form elemental sulfur:

In the classic cation separation process , it is used to precipitate an entire group ( hydrogen sulfide group ). By introducing H 2 S gas into weakly acidic solutions, the following precipitates: As 2 S 3 , SnS 2 , Sb 2 S 3 , HgS , SnS , PbS , Bi 2 S 3 , CuS and, when diluted with water, also CdS . These cations then have to be separated further and identified with the help of detection reactions.

Because of its toxicity, hydrogen sulfide is increasingly being dispensed with in the cation separation process. Instead, the required sulfide anions are generated in situ , for example with the help of thioacetamide , in smaller quantities also by heating sulfur with candle wax.

H 2 S-Gang : This procedure builds on the classic separation walk . Chemically similar cations are precipitated in groups using specific reagents. The precipitate is then separated and analyzed, the supernatant (the solution) is used and the next group is precipitated.

Hydrogen sulfide is an extremely poisonous gas that can cause hydrogen sulfide poisoning. Due to its higher density than air, the gas collects on the ground.

Hydrogen sulphide has the property of numbing the odor receptors , so that an increase in concentration is no longer perceived through the odor. The threshold for anesthetizing the odor receptors is at a concentration of 200  ppm H 2 S. The intense, easily perceptible odor of rotten eggs is therefore an invaluable advantage over other deadly gases, but in case of doubt it is deceptive.

When it comes into contact with mucous membranes and tissue fluid in the eyes, nose, throat and lungs, the hydrogen sulphide forms alkali sulphides, which cause a very strong irritation. One consequence of this is water retention in the lungs. Symptoms usually go away within a few weeks.

The actual toxic effect is based on the destruction of the red blood pigment hemoglobin and thus a paralysis of the intracellular respiration. The mechanism is still unclear, it is assumed that oxygen- transmitting enzymes containing heavy metals are inactivated. The smaller, non-oxidized part of the hydrogen sulfide can cause damage to the central and possibly also the peripheral nervous system .

The following effects occur on humans :

This means that H 2 S concentrations as low as 0.1% are fatal after a few minutes. At such concentrations, unconsciousness occurs within one or more breaths.

The concentration of H 2 S, which in human cells by inhibiting the cellular respiration is harmful, was in vitro with 0.32 μ mol / l determined. 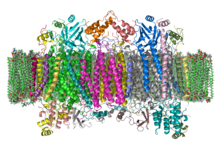 Hydrogen sulphide is formed in the body for a short time when an excess of cysteine ​​is broken down by means of cystathionine γ-lyase ( EC  4.4.1.1 ), which normally breaks down cystathionine to cysteine, but can also break down cysteine ​​further:

Another reaction of the same enzyme was found in rats, which originates from cystine , but plays no role in humans:

The gas quickly combines with thiol residues from surrounding proteins (-Cys becomes -CySSH) and thereby changes their biological activity. In particular, the enzyme cytochrome c oxidase is deactivated. The majority, however, is oxidized to sulfate in the mitochondria via thiosulfate and sulfite, or processed to sulfite / sulfate or taurine via cysteine sulfinate.

Mitochondria protect themselves from H 2 S or HS - through its oxidation to sulfate, which takes place in three steps:

First, H 2 S is oxidized to thiosulfate by an enzyme complex. In detail, three individual reactions take place, which are catalyzed by the enzymes sulfide: quinone oxidoreductase ( EC  1.8.5.- ), sulfur dioxidease ( EC  1.13.11.18 ) and rhodanase .

Part of the oxidation of thiosulphate to sulphite takes place with the help of glutathione and the enzyme thiosulphate reductase ( EC  2.8.1.3 ), another part uses thiosulphate sulfur transferase .

Finally, the sulfite oxidase oxidizes sulfite to sulfate. A confirmation of the degradation pathway resulted from the identification of the mitochondrial Schwefeldioxygenase with the ETHE1 - gene , which in a rare mutation in a genetic disease with increased damage caused by H 2 S concentrations leads.

In the human body, hydrogen sulfide acts like nitric oxide as a messenger substance (see also gasotransmitter ) and has a vasodilator effect . It is produced from the amino acid L - cysteine in endothelial cells of the blood vessels as well as in smooth muscle cells . If the vascular endothelium is stimulated via muscarinic acetylcholine receptors, H 2 S is released. This leads to the activation of voltage-activated and calcium-activated potassium channels in the smooth muscle cells of the vascular muscles . This leads to a hyperpolarization of the smooth muscle cells and ultimately to an expansion of the blood vessels (vasodilation) .

Hydrogen sulfide could potentially be used as a remedy for erectile dysfunction. It is naturally formed in the cavernous bodies of the penis and the smooth muscles of the penile artery . Tests have shown that both L- cysteine ​​and hydrogen sulfide (salt) supplied externally cause a concentration-dependent erection in the erectile tissue of the penis ( Corpora cavernosa penis ).

In low concentrations, hydrogen sulfide slows down metabolic processes and lowers body temperature in mice. This hibernation-like state is fully reversible and harmless to the animals. Investigations are ongoing as to whether this effect can be used in transplant medicine to improve the quality and survival time of organs intended for transplantation. In addition, human studies are being carried out to determine whether hydrogen sulfide can improve the likelihood of survival in emergency patients. The aim is to slow down the metabolism by inhaling or injecting H 2 S and thus to reduce the need for oxygen. Ideally, this measure would already be preclinical, e.g. B. by the emergency services .

In a 2007 study at the University of Alabama at Birmingham , which was published in the journal Proceedings of the National Academy of Sciences , hydrogen sulfide in very low doses is also believed to be a major factor in garlic's health effects . The authors report that garlic lowers the risk of heart disease from high blood pressure, increased blood fat ( cholesterol ), and other factors. In population groups that consume a lot of garlic, there are therefore fewer problems with high blood pressure.

Both the toxicity and its biological relevance place high demands on the analysis of hydrogen sulfide. In contrast to the above-mentioned use of H 2 S in the inorganic separation process, instrumental, quantitative detection methods for H 2 S are presented here.

The most frequently used chromogenic reaction for the photometric detection of H 2 S and sulfides is the reaction with N ', N-dimethyl-p-phenylenediamine to form methylene blue . Iron (III) salts are used as a catalyst. The reaction product has an absorption maximum at 670 nanometers and can be determined photometrically.

Amperometric H 2 S sensors are widely used . In amperometry, a potential is applied to a working electrode and the resulting current is measured; this is proportional to the concentration of H 2 S. Hydrogen sulfide is oxidized to sulfate. Electrodes modified with carbon nanotubes achieved a detection limit of 0.3 µmol / l at an oxidation potential of 100 mV. The design of the electrodes used is closely related to that of the Clark electrode for oxygen determination.

Potentiometric probes have also been developed for the sensing of gaseous H 2 S. As an example, solid electrolyte-based, galvanic half-cells can be mentioned, which together with H 2 S deliver an electromotive force that is measured. With yttrium oxide-stabilized zirconium tubes as sensors, H 2 S concentrations in air of up to 0.2 ppm could be measured with reliable reproducibility. Using hexacyanoferrate as a redox partner, even 30 ppb H 2 S could be detected.

Gas chromatography is often the first choice for the analysis of gaseous substances . After separation, sulfur compounds such as H 2 S can be detected by flame photometry at an emission wavelength of 397 nanometers. One method for the rapid detection of traces of hydrogen sulfide in coal gas achieved a detection limit of 10 ppb.