The title of this article is ambiguous. Further meanings are listed under mutation (disambiguation) .

Red tulip with half yellow petal due to mutation

The reddish leaf color of the copper beech (above) resulted from a mutation in a common beech (below). 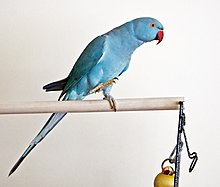 A mutation ( Latin: mutare "change / change, transform") is a spontaneously occurring, permanent change in the genetic make-up in biology . The change initially affects the genome of only one cell , but is passed on to its daughter cells. In multicellular animals, a distinction is made between germline mutations, which can be passed on to the offspring through inheritance , and mutations in somatic cells , which are not present in the germ cells ( gametes ) but only in the other tissues of the body. An organism with a new trait created by mutation is called a mutant or mutant .

A mutation may or may not affect the characteristics of an organism ( silent mutation ). Deviating characteristics can have negative, positive or even no consequences with regard to viability and / or reproductive capacity. If a mutation manifests itself as a clearly different phenotype , which remains stable to a certain extent (over 1%) in a population , it is also referred to as polymorphism in biology . Polymorphism is an essential prerequisite for the emergence of new species ( biodiversity ).

Sometimes the unexpected phenotypic occurrence of very rare recessive hereditary factors, which were inherited from inconspicuous mixed hereditary ( heterozygous ) ancestors (as conductors ) to the common offspring, is mistaken for a mutation.

Real mutations can occur spontaneously or can be caused by external influences, such as mutagenic radiation or chemicals that change genes ( mutagens ).

Mutations in genes whose gene products are necessary for the maintenance of intact DNA, for example tumor suppressor genes , can lead to further mutations ( mutator phenotype ).

The term mutation was coined by the botanist Hugo de Vries in 1901.

Differentiation according to heredity

Germline mutations
are mutations to offspring via the germ line inherited are; they affect egg cells or sperm and their precursors before and during oogenesis or spermatogenesis . These mutations play an important role in evolution because they can be transmitted from one generation to the next. Germline mutations usually have no direct impact on the organism in which they occur.
Somatic mutations
are mutations that affect somatic cells . They have an impact on the organism in which they take place, but are not passed on to offspring. Among other things, normal body cells can transform themselves into unchecked, proliferating cancer cells . Somatic mutations also play a role in the aging of an organism. They are therefore important for medicine.

Errors in the replication
According to the template, DNA polymerases build a complementary DNA strand with different error rates.
Insufficient proof-reading activity
Some DNA polymerases have the ability to independently recognize and correct incorrect installations ( English proof-reading , proofreading). However, z. B. the DNA polymerase α of the eukaryotes no proof-reading activity.
Errors in pre- and post-replicative repair mechanisms
If an unusual nucleotide, such as uracil, is found in DNA, it is removed. If there is a mismatch between two DNA-typical nucleotides, the repair enzyme makes a decision with a 50 percent probability of error .
Uneven crossing-over
Mismatches in meiosis can occur due to neighboring similar or identical sequences on the strand, such as satellite DNA or transposons .
Non-disjunction
The incorrect segregation or non-disjunction (English disjunction , separation ') of chromosomes leads to incorrect distribution to the daughter cells and thus to trisomies and monosomies .
Integration or jumping out of transposons or retroviruses
These elements can be integrated into genes or gene regulatory areas.

Differentiation according to size and place of change

The  sickle cell anemia is caused by a mutation in the gene of hemoglobin triggered subunit. It leads to sickle-shaped red blood cells , here together with normal shapes.

Gene mutation
a hereditary change that affects only one gene. Examples are dot and grid mutations . With the point mutation, only one organic base is changed (mutated) in the genetic code. A frameshift mutation, i.e. an insertion (insertion) or deletion (removal) of a number of bases that is not a multiple of three, changes the entire structure of a gene due to the triplet coding in the genetic code and therefore usually has far greater effects. Another possible consequence is alternative splicing . The gene mutations also include deletions of longer sequences as well as gene duplications in which a certain section of a chromosome doubles or multiplies.
Chromosomal mutation or structural chromosomal aberrations
heritable change in the structure of individual chromosomes. The structure of a chromosome that is visible in the light microscope has changed. Chromosome pieces can be lost or parts of another chromosome can be incorporated. An example is cat cry syndrome , in which a section of chromosome 5 has been lost. As a result, numerous genes are missing that lead to a strong change and damage in the phenotype.
Genome mutation or numerical chromosomal aberration
a change in which entire chromosomes or even sets of chromosomes are increased ( aneuploidy , polyploidy ) or are lost. A well-known example in humans is Down's syndrome . Here is the chromosome 21 present in triplicate.

Differentiation according to consequences for the protein

Differentiation according to consequences for the organism

Neutral mutations
can change the phenotype, but have no fitness consequences .
Silent mutations
are mutations in which the protein produced remains unchanged. Nevertheless, changes in the organism can occur because the mRNA folds when it leaves the cell nucleus. Different folding can influence the amount of protein produced.
Conditional lethal mutations
Mutations, the modification of which in the gene product only kills an organism under certain growth conditions.
Lethal mutations
Mutations that after their occurrence kill an organism in any case, regardless of its respective phase of life.

In humans, the number of new mutations ( de novo mutations) has been determined by sequencing the DNA of the father, mother and the corresponding child. An average of 45 new mutations were found, with around 80% of the mutations originating from the father's sperm. Since sperm formation ( spermatogenesis ) is continuous in men and thus the number of replications of DNA increases with age, it is not surprising that the number of new mutations increases with the age of the father. A young father of 20 contributes 20 mutations while an older father of 40 contributes 40 mutations. Although the woman's egg cells are all formed in the embryonic development before birth, and therefore no further replication of the DNA takes place, an increase in new mutations from 7 to 12 could be observed in women aged 40 compared to women aged 20. Obviously, the new mutations do not only occur during the replication of the DNA.

The high frequency of mutations is shown in a sequence analysis of the protein-coding DNA of humans in 60,706 people. The study reveals 7.4 million variants, which on average corresponds to a mutation in every 8th base pair of human DNA.

Many mutations lead to changes in DNA sections that have no consequences for the organism. This is the case when the mutated site in the genome is not used for genetically relevant information (see pseudogene , non-coding DNA ). Even if the changed position is used, the information content of the gene may not have changed because a number of amino acids are coded identically (see genetic code ). Therefore, these mutations are silent or silent mutations called. Even mutations that change the amino acid sequence of a protein can be neutral or almost neutral if this hardly changes the structure of the protein.

Neutral mutations contribute to the fact that functionally identical genes within a group of organisms have different genetic “letters” within their nucleotide sequence. These differences, called polymorphisms , can be used to derive relationships between individuals or to estimate an average mutation rate.

In addition, it is also important that several genes code the same genetic properties, and not just in the diploid set of chromosomes , so that a mutation does not have to be immediately noticeable for this reason.

The neutral theory of molecular evolution holds that most genetic changes are neutral in nature. This hypothesis is controversial and the subject of current research.

Larger changes in the genome in particular often lead to disadvantageous changes in metabolism or to malformations and other peculiarities.

There are various hereditary diseases that are either inherited or can appear as a result of mutations. Examples are:

Mutations are one of the evolutionary factors and therefore jointly responsible for the development of life and the diversity of species on earth . Mutations with positive consequences are much less likely to occur than those with a neutral or negative effect. But when a positive mutation occurs, natural selection can help it spread through a population. For example, the consequences of malaria in heterozygous carriers of sickle cell anemia are less serious. This mutation is therefore more common in areas affected by malaria.

Humans make use of the genome-changing effect of ionizing radiation to artificially trigger mutations. One application is the irradiation of flower and plant seeds in order to create previously unknown shapes and to use them economically. The procedure usually has a very low success rate due to the widespread, extensive and untargeted change in the genetic material.

In horticulture , a mutation from which a new variety is created is also known as a “ variety ” or “sport”.