The title of this article is ambiguous. Further meanings are listed under thymus (disambiguation) . 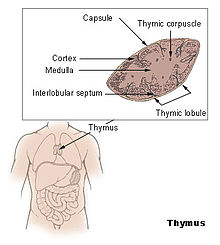 Location and (rough) scheme of the thymus.

The thymus ( Latinized from ancient Greek θυμός thymos , German 'life force' ) or the sweetbread is a gland of the lymphatic system of vertebrates and thus part of the immune system . In mammals, the organ is located cranial to the heart in the middle layer behind the breastbone . In some mammals (e.g. artifacts , guinea pigs ) it extends over the entire neck, in birds it is only developed in the neck area. With the entry into sexual maturity, the organ regresses physiologically ( involution ).

As a lymphatic organ, the thymus expresses the specific defense, namely the T lymphocytes. The popular name "growth gland" is correct in that the organ only appears in the phase of the growing organism, but it is not associated with body growth per se. 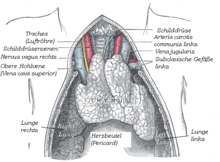 The thymus on the mature human fetus in situ .

The human thymus is a bilobed organ, with each lobe in newborns being approx. 6 cm long and 2 cm wide. The thymus continues to grow a little in early childhood, it retains its size until puberty , after which its tissue is more and more replaced by functionless fatty tissue (→ involution ). In the other mammals, a distinction is made between a paired neck lobe ( lobus cervicalis ), a transitional part ( isthmus ) and an unpaired breast lobe ( lobus thoracicus ). In birds, several small thymus lobes are formed on both sides along the neck.

Unlike the other lymphoid organs, exclusively from the mesoderm emerge, the thymus from the developed meso , the endoderm and ectoderm , and is therefore called lymphoepitheliales organ. Histologically , lobules ( lobules thymici ) with cortex and marrow can be distinguished in the thymus . In humans and most other vertebrates in particular, the Hassall corpuscles typical of the lymphatic tissue of the thymus are found in the thymus medulla .

In the thymus, thymocytes (pre-T lymphocytes ) are converted into T lymphocytes (syn. T cells). The T-lymphocyte precursors migrate from the bone marrow via the bloodstream into the lobular cortex. They go through the lobule from the outside in and undergo a ripening process.

First, random recombination creates lymphocytes against all possible target molecules. A blood thymus barrier prevents contact with foreign antigens . Those clones of lymphocytes that can recognize the body's own MHC molecules and are therefore functional are then multiplied - all other clones are sent to programmed cell death ( positive selection ). The recognition of the body's own MHC molecules in combination with foreign antigens later triggers the specific immune defense. In a second step, those T lymphocytes that are directed against the body's own antigens and would therefore attack the body's own cells are sorted out by programmed cell death ( negative selection ). As a result, T lymphocytes have a self-tolerance towards the body's own tissue, so they do not attack it. The differentiated T-lymphocytes migrate from the thymus via the blood to the secondary lymphatic organs , where they multiply when required, i.e. when a corresponding antigen has penetrated the body.

Since the thymus is used for the primary development of T lymphocytes, it is referred to as the primary or central lymphocyte organ together with the bursal-equivalent organ .

After the formation of an extensive reservoir of T lymphocytes directed against specific antigens, the thymus is no longer necessary, because the multiplication of the individual T lymphocyte clones takes place in the T lymphocyte regions of the secondary if the corresponding antigens enter the body lymphatic organs (e.g. paracortex in the lymph node , PALS of the spleen ). With the onset of puberty , the thymus recedes ( involution ), so that in adults only a residual thymus - also known as retrosternal fat in humans - remains, which mainly consists of adipose tissue .

Complete regression of the thymus is a major factor in immunosenescence .

Removing the thymus ( thymectomy ) in fetuses or very young animals or humans means that no functioning immune system can be built up, because T lymphocytes play a central role in this. Indications for a thymectomy in adult patients include a thymoma and myasthenia gravis , in which removal of the thymus can, under certain conditions, have a positive effect on the course of the disease.

Some peptides are currently being investigated as active ingredients for their medicinal properties. Others, such as thymosin α1, have now been approved as active pharmaceutical ingredients in many countries around the world and are in therapeutic use. A meta-study showed that tumor therapies with thymus peptides had hardly any positive effects on the course of the disease; only for thymosin α1 were there a trend towards longer survival rates.

Thymus as a food

The thymus of veal and lamb is offered as sweetbreads or milk (Swiss) or lamb sweetbreads as a specialty.