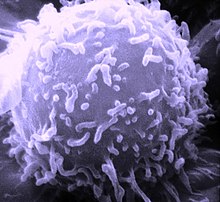 SEM image of a lymphocyte

Lymphocytes are cellular components of the blood . They include the B cells , T cells and the natural killer cells and belong to the so-called "white blood cells" ( leukocytes ). In adults, the lymphocytes represent about 25 to 40 percent of the leukocytes in the peripheral blood, i.e. outside the blood-forming organs.

The main task of the lymphocytes is to recognize foreign substances - such as bacteria and viruses - and to remove them using immunological methods. For this purpose, the cells in the spleen , bone marrow , thymus and lymph nodes (presumably also in the appendix vermiformis ( appendix )) are shaped , which means that they have to "learn" which substances belong to the body of this person and which are to be regarded as foreign. The lymphocytes thus belong to the adaptive immune system - the specific defense - in contrast to the innate (innate) immune system (for example macrophages ). The lifespan of lymphocytes can range from a few hours to several years. Cell division of the B lymphocytes creates plasma cells with a lifespan of a few weeks as well as memory cells that are present in the body for several years to lifelong.

The lymphocytes perform their task in different ways. For example, they release messenger substances ( cytokines ) that induce other immune cells and normal cells to fight potential dangers such as bacteria and viruses . In addition, they produce antibodies that mark these “attackers” as “foreign” and they destroy infected cells.

Place of education and morphology 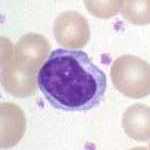 Lymphocyte in the cytological picture

The lymphocytes arise as precursor cells from pluripotent stem cells in the bone marrow of the flat bones (pelvis, sternum, sometimes skull bones), in children also in the large tubular bones (arms, legs). The progenitor cells mature in the bursa equivalent (in humans the bone marrow itself) into differentiated B lymphocytes and in the thymus into T lymphocytes . In their further development, the B and T lymphocytes migrate into the secondary lymphocyte tissue, where the differentiation of the B lymphocytes is supported by the cytokines provided by T helper cells .

The cells contain nuclei and have a granulated cell plasma in the blood smear ( Pappenheim stain ) . With increasing age of the cells, the nucleus becomes smaller (cell size: ten to 15 micrometers).

There are several functionally distinguishable types of mature lymphocytes:

NK cells ( natural killer cells ) are another group of large granular lymphocytes that have neither a T nor a B cell receptor andcells infectedby releasing lytic granules (foreign cells, especially tumor cells and virus-infected cells) ) and perform important functions in innate immunity. The NK cells recognize and destroy all MHC-I negative cells in the organism. They are about ten micrometers in size and have a heterochromatic core. They mature in the bone marrow. They then circulate in the blood or settle in the spleen .

The diseases of the lymphatic system include congenital primary and acquired secondary immunodeficiencies , as well as emanating from lymphatic cells malignancies such as non-Hodgkin's lymphomas , including chronic lymphocytic leukemia , of Morbus Hodgkin , the light emanating from the plasma cells, multiple myeloma and acute lymphatic leukemia .

An HIV infection leads to a reduction in the number of lymphocytes.