Leukocytes (singular leukocyte , from ancient Greek λευκός leukós , German 'white' and ancient Greek κύτος kýtos , German 'cavity, vessel, shell' ) or white blood cells (outdated leukocytes and white blood cells ) are in the blood , in the bone marrow , in the lymphatic organs and other body tissues of vertebrates . In contrast to the erythrocytes ( red blood cells) leukocytes do not contain the red pigment hemoglobin . The difference is particularly noticeable in mammals , whose mature erythrocytes manage without a nucleus (hence also called red blood cells in German ). Leukocytes have special functions in the defense against pathogens and foreign structures. They belong to the immune system and are part of the specific and unspecific immune defense, which is why they are also referred to as immunocytes ( immune cells ). The percentage of leukocytes in the peripheral blood is recorded with a differential blood count.

From left to right: erythrocyte (red blood cell), thrombocyte and leukocyte in the scanning electron microscope .

Construction of the leukocytes

Depending on their type, leukocytes are different in shape and structure. The size of the leukocytes varies between 7 µm for lymphocytes and 20 µm for monocytes. The red blood cells are about 7.5 µm in size. The lifespan of the cells ranges from a few days to several months. Certain leukocytes are amoeboid and can actively migrate from the blood into the various cell tissues, so-called leukodiapedesis or leukocyte adhesion .

The formation of leukocytes is a process that begins in adults in the red bone marrow ( medulla osseum rubrum ) of the sternum and pelvis . This process is called leukopoiesis (also leukocytopoiesis). In children there is also blood-forming red bone marrow in the long tubular bones of the arms and legs . The white blood cells are formed there from so-called precursor cells of the stem cells and then differentiate further within the different categories of leukocytes, depending on their intended tasks and functions. In order to be able to fulfill this, parts of the leukocytes have to be shaped after their formation in certain organs . In the lymphatic system , i.e. in the lymph nodes , thymus , spleen , tonsils and bone marrow, they have to learn which substances belong to the body of the organism and which are to be regarded as foreign. The stem cells themselves have extensive opportunities to develop; they are pluripotent . When they divide, not two identical daughter cells arise, but rather a new pluripotent stem cell and a precursor cell of the individual blood cells (determined stem cell), which then continue to mature. Depending on which growth factor ( cytokine ) acts, the different types of either leukocytes, erythrocytes or megakaryocytes arise . 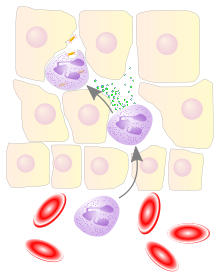 Neutrophil granulocytes migrate from the blood vessel into the tissue, secreting proteolytic enzymes to break intercellular connections (to improve their mobility) and phagocytosed bacteria

Functions of the leukocytes

White blood cells render incompatible substances or pathogens harmless to the organism . These include bacteria , viruses , tumor cells , toxins , exogenous particles, worms , fungi and protozoa (single cells). The individual subgroups of leukocytes have different functions within the immune system - from phagocytosis and the marking of antigens to the fight against endogenous and exogenous cells and cancer cells.

Neutrophils , monocytes , macrophages and dendritic cells , for example, are available as part of the non-specific defense for phagocytosis capable. In doing so, they absorb foreign material and render it harmless. They are therefore also called phagocytes.

B-lymphocytes, on the other hand, produce antibodies specifically directed against certain pathogens or harmful substances after suitable stimulation . They therefore belong to the specific defense.

T-lymphocytes coordinate specific and unspecific defenses, among other things. Leukocytes are also involved in inflammation and are able to maintain, modulate or terminate them through released messenger substances (mediators) such as cytokines and leukotrienes . Leukocytes also play an essential role in all autoimmune diseases .

There are many ways to categorize the different types of leukocytes.

Functions of the individual leukocytes

The individual blood cells have various functions within the immune system, which are briefly outlined below. More information is available under the corresponding terms.

Binding of leukocytes to the blood vessels

The white blood cells are, so to speak, the guardians of the immune system and constantly patrol the entire organism in search of pathogens or cell structures to be destroyed. To do this, they use the bloodstream to get from one place to another and during this phase they systematically scan the walls of the vascular cells for stop signals that indicate cancer cells, for example. In addition, hundreds of white blood cells penetrate the tissue every minute and search for injuries and inflammation . They do this by rolling along the walls of the cells and looking for certain structures that indicate such a condition.

In leukemia , individual subgroups of the leukocytes change to tumor cells. The lymphocytes are most commonly affected. The origin of the disease is the bone marrow, where the tumor cells come into contact with the bloodstream and are thus distributed throughout the body. Due to their massive occurrence, the tumor cells cause disease symptoms in all organs . Above all in the bone marrow, they displace erythrocytes, normal leukocytes and thrombocytes and thus inhibit their formation. Those affected are characterized by tiredness , paleness, a tendency to bleed and a general feeling of illness. At the same time, there is a susceptibility to infections because the degenerated leukocytes do not fulfill their actual task of immune defense.

The human immunodeficiency virus reproduces primarily via T helper cells . Over time, the number of T-helper cells present decreases until the entire immune defense breaks down. The symptoms of AIDS appear. The sick often die from opportunistic infections . A typical example of such an infection is pneumonia caused by Pneumocystis jirovecii , which healthy people only very rarely get sick with.

This is a group of (rare) hereditary glycoprotein biosynthesis disorders that can lead to mental and physical disabilities and an increased susceptibility to infections. Nine different subtypes of the disease are currently known. The number of sick people in Europe is estimated at 300. Leukocytosis for no apparent reason is typical . The ability of the leukocytes to adhere to the blood vessel wall is considerably restricted in this clinical picture. The clinical picture is also known in veterinary medicine .