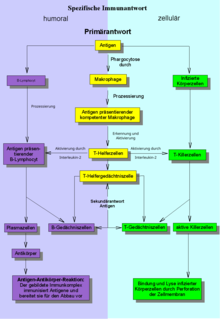 Schematic representation of the primary and secondary specific immune response

An immune response can be triggered by pathogens that have entered the body ( bacteria , viruses , fungi , parasites ) or pathologically altered cells in the body ( cancer cells ). An immune response against normal body cells can occur if the body's own substances are wrongly recognized as foreign ( autoimmunity ). Substances from the environment that are harmless in themselves can also be classified as dangerous and cause a reaction ( allergy ). If, on the other hand, pathogens manage to escape an immune response, this is known as an Immunescape .

The mechanisms that cause the elimination of invading pathogens in the course of an immune response are extremely diverse. The complement system consists of self-organizing protein complexes that mark pathogens or kill them directly. Microbicidal substances are also released by cells outside of the immune system, a wide variety of phagocytes and killer cells can be activated, and antibodies bind highly specifically to foreign structures. As a rule, several of these effector mechanisms are active at the same time in order to ensure that the pathogens are completely eliminated. However, an overreaction of the immune system must be prevented as it can cause severe tissue damage or even death (see anaphylactic and septic shock ). Furthermore, a reaction against one's own body must be largely ruled out in order to avoid autoimmune diseases . Therefore, there are various regulatory mechanisms within the immune system in order to maintain the right balance between protective and harmful responses.

A large number of cell types and soluble factors are involved in the innate immune response, which together form a closely interlinked and well-coordinated defense system. It is triggered by the characteristic features of pathogens that are recognized by innate receptors - hence the term "innate immune response". It is quick and efficient: only minutes after penetration, most pathogens are detected and attacked, and after a few hours they are completely eliminated.

Simplified diagram of the processes involved in the primary immune response

A macrophage ("scavenger cell") activated by phagocytosis of a virus then sets in motion the acquired immune response , including a specific or adaptive immune response. This in turn is divided into two areas; the humoral and cellular immune response.

(from Latin [h] umor = moisture, also juice, liquid ) Defense substances against pathogens that occur in the body fluids blood and lymph and can be detected in cell-free blood plasma or serum . Antibodies, also called immunoglobulins , occur as proteins in both the blood and the lymph and are produced and released by plasma cells.

Activation of a B cell is initiated by binding a suitable antigen to the B cell receptors . These are special immunoglobulins that are anchored in the cell membrane of the B cell. Once the antigen-antibody complex has been absorbed into the cell, the antigen in its lysosomes is shortened by proteases to a length of 12 to 16 amino acids, bound by the MHC2 proteins and presented on the surface of the cell. Thanks to the T-cell receptor , the T-helper cells of type 2 are in turn able to recognize the fragment of the antigen presented on MHC2 by antigen-presenting cells . The T helper cell is activated by the recognition and binding of at least one other signal (co- stimulator ) and then releases cytokines that are bound to the B cells and thus activate the B cells and ultimately also for the maturation of new plasma cells to lead.

The cellular immune response is triggered by professional antigen-presenting cells and cytotoxic T-cells and reinforced by T-helper cells of type 1. The cytotoxic T cell has to be activated by a specific antigen and by various costimulatory signals before it can effectively fulfill its function of killing infected or degenerated cells. Cytotoxic T cells can be activated, for example, by cellular proteins that are formed in the cytosol of cancer cells or virus-infected cells and then presented on the cell surface.

During activation, the cytotoxic T-cell is first stimulated by a professional antigen-presenting cell, often by mature dendritic cells. The specific antigen is broken down by the proteasome into short fragments of eight to eleven amino acids . These fragments are bound by the so-called MHC I proteins and presented to the cytotoxic T cells on the cell surface. The cytotoxic T cells can recognize the antigen fragments with the help of their T cell receptors and are thereby activated for the first time. It is only through the co-stimulators formed by the antigen-presenting cells and cytokines released by T-helper cells of type 1, which diffuse to the cytotoxic T-cells and are bound by cytokine receptors, that the cytotoxic T-cells are induced to become fully activated to differentiate cytotoxic T cells. When the now activated cytotoxic T cell specifically binds with its receptor to a diseased cell, the activated T killer cell initiates apoptosis in it . To do this, they release perforin , which perforates the diseased cell. Once the cell membrane has been perforated, so-called granzymes penetrate and activate several enzymes that digest the cell.

Some cytotoxic T cells also differentiate into T memory cells and are now available for the renewed destruction of diseased body cells.

Various resistance mechanisms are developed in bacteria , such as B. Restriction enzymes that recognize and destroy molecular structures foreign to the cell. In addition, different types of bacteria have some form of adaptive immunity from CRISPR . Jaws do not yet have separate B and T cells and corresponding receptors for an adaptive immune response, but a variable lymphocyte receptor . In birds, antibody-producing B cells mature in the bursa of Fabricius , and they have only one type of antibody, immunoglobulin Y .