Scheme of the complement cascade

The complement system is a system of plasma proteins that can be activated by microorganisms on numerous surfaces in the course of the immune response . It was originally discovered as a complementary ( complementary ) part of the antibody response , but is now known to be involved in the innate immune system .

The more than 30 proteins of the human complement system are dissolved in the blood plasma or cell-bound and serve to defend against microorganisms (e.g. bacteria , fungi, parasites). However, they also have strong cell-destroying properties and, if they act unregulated, can be responsible for tissue damage in the course of many diseases (e.g. glomerulonephritis , hemolytic-uremic syndrome , myocardial infarction , systemic lupus erythematosus , rheumatoid arthritis ).

The term “complement” was introduced by Paul Ehrlich around 1890 . According to his theory, the immune system was made up of cells with specific receptors that can recognize antigens . After contact with the antigen, these receptors are formed and released into the blood for distribution. Ehrlich called these receptors, now called antibodies , amboceptors. Their function is to recognize both the antigen and a heat-sensitive component of the blood serum (which Ehrlich referred to as complement), as they complement the function of the cellular immune defense. Even though Ehrlich coined the term complement, the actual description of complement goes back to Jules Bordet : He discovered that complement can work both in conjunction with antibodies and on its own.

The main task of the complement system is to cover the surface of pathogens in order to enable the phagocytes to destroy those pathogens that they would otherwise not recognize ( opsonization ). In addition, it triggers a number of inflammatory reactions that help fight the infection . The fragments of some complement proteins act as chemokines that attract more phagocytes to the focus of infection. Another function is the direct destruction of bacteria by inserting pores in their cell membranes .

A large part of the complement proteins are so-called zymogens . These are proteins, in this case proteases, which in turn are activated by limited proteolysis. These zymogens are usually found all over the body without any reaction. In the event of an infection, however, they are activated locally and activate further zymogens by splitting them. This triggers a cascade of zymogen activations, whereby a few molecules activated early are activated later, which leads to an amplification of the response.

Components of the complement system

The following proteins are directly involved in the signal pathways of the complement system: the complement factors C1 to C9 , mannose-binding lectin (MBL) and the serine proteases C1r and C1s or MASP-1 to 3 ( MBL-associated serine proteases ). By protease -mediated cleavage of complement factors C1 to C5 and bearings together with the factors C6 to C9 produced a number of proteins and protein complexes. These include, for example, the anaphylatoxins C3a, C5a and C4a with vasodilating, bronchoconstrictive and chemotactic effects ( inflammatory reaction ) and the Membrane Attack Complex (MAC). Negative regulators of the system are the C1 inhibitor, factor H, factor I, C4bp, CD35, CD46, CD55 , CD59 and vitronectin. Properdin and Cobra Venom Factor act as activators.

Process and effect of complement activation 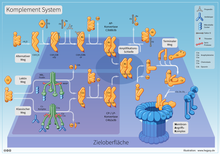 There are three ways in which the complement system is activated:

The product of all three pathways is a serine protease called C3 convertase on the surface of the target cell. The cleavage cascade it triggers leads to chemotactic attraction of leukocytes (especially macrophages ), increased phagocytosis , and ultimately to lysis of the target cell. Cleavage products of the complement factors C1 to C5, which arise in the individual pathways, also act as anaphylatoxins and mediate an inflammatory reaction .

Nine glycoproteins (C1-C9) are involved in the classic activation pathway of the complement system. These have molecular weights of 24 to 410 kDa and are secreted into the bloodstream after formation in the liver , and to a small extent also in lymphocytes , macrophages and fibroblasts , where they make up about 10% of the globulin fraction. The complement factor C1 is the first complement protein of the classical path and consists of the six-member collectin C1q and two molecules C1s and two molecules C1r (Fig. Below). C1q has several binding domains for antigen- bound antibodies (IgG and IgM). For the activation of the serine proteases bound to C1q (C1r and C1s) two Ig-Fc regions 40  nm apart are necessary. That is why one molecule is sufficient for IgM antibodies, whereas for IgG antibodies several, ideally six, molecules are required; IgA, IgE or IgD antibodies cannot activate the classic route. Free antibodies therefore do not lead to activation. However, C1q can also bind directly to the surface of pathogens and thus initiate the classic route without the help of antibodies.

Classic activation can also be triggered by DNA , collagen and CRP ( C-reactive protein ).

After activation, the serine protease C1s then catalyzes the two start reactions of the classic route. One cleavage of C2 into C2a and C2b and another of C4 into C4a and C4b. C2a and C4b combine to form the C4b2a complex and thus form the “C3 convertase of the classic route”. C4b2a3b forms the C5 convertase, which cleaves C5 into C5a and C5b. C3a and C5a diffuse and in turn act as anaphylatoxin .

In the classic activation of the complement system, in addition to C4a and C4b, C4d is also split off, which can bind covalently to the endothelium on which the complement reaction took place. The function of the C4d is not yet understood, but it is used in biopsy as a marker and diagnostic tool for antibody-induced transplant rejection.

The activation of C1 is controlled by a plasma protein, the C1 inhibitor, which binds to the active enzyme part of C1 (C1r / s) and thereby separates it from C1q. Factors I, H and C4b-binding protein cleave activated C3.

In the lectin pathway, the mannose-binding lectin (MBL) binds to mannose or fikolin to N-acetylglucosamine on the pathogenic surface (e.g. bacterial peptidoglycan ) and activates the MBL-associated serine proteases MASP-1, MASP-2 and MASP -3. These catalyze the same reactions as in the classic way. Here, too, C4b and C2a form a C4b2a heterodimer and thus likewise the “C3 convertase of the classic route”.

The alternative path leads to the formation of the " C3 convertase of the alternative path ". This path is triggered by the spontaneous decay of the unstable complement factor C3 into C3a and C3b. C3a diffuses and has a chemotactic and inflammatory effect as anaphylatoxin. C3b binds covalently to a cell surface. Free C3b is inactivated by factor H and factor I. If C3b binds to the body's own cells, it is also inactivated or broken down relatively quickly by regulatory proteins. On the other hand, it remains active on pathogenic surfaces and binds factor B, which is cleaved into Ba and Bb by factor D (plasma protease). The resulting complex C3bBb is known as the “C3 convertase of the alternative route”. It is very unstable and disintegrates if it is not stabilized by properdin.

The C3 convertases, C3bBb and C4b2a, formed in the alternative, classic and lectin pathway, now split C3 into C3b and C3a with high activity. The resulting C3b molecules now essentially have three options: 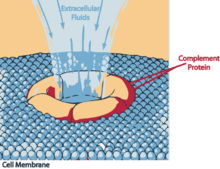 The two products of the C5 cleavage act on the one hand as anaphylatoxin and chemotactic attractant (C5a) and on the other hand they also initiate the formation of the membrane attack complex (MAC) (C5b). The “anchor” C5b recruits the factors C6, C7 and C8 one after the other. The resulting C5b678 complex then starts the polymerization of C9. After the aggregation of up to 18 C9 monomers, the C5b678poly9 complex represents the finished membrane attack complex, which attacks the target cell through pore formation in the cell membrane and leads to its lysis.

The soluble complement fragments C3a, C4a and C5a trigger a local inflammatory reaction. By binding to the complement receptors of the basophilic granulocytes, they lead to the release of histamine , heparin and leukotrienes . The activation of complement receptors on endothelial cells , smooth muscle cells, monocytes , eosinophils and mast cells leads to bronchoconstriction , vasodilation , increase in vascular permeability and recruitment (through C5a) of granulocytes and monocytes on vascular walls, which is the prerequisite for their migration into the inflammatory area. C3a mainly promotes tissue repair mechanisms. C5a stimulates the inflammatory response. The anaphylatoxins thus form an important link between innate and adaptive immune defense .

Many of the functions of complement have been discovered through the appearance of diseases in deficiencies in complement factors or regulators: