Histamine ( give a wiki. Ἱστός histos , tissue ') - in the nomenclature : 2- (4-imidazolyl) ethylamine - is a natural substance that in the human or animal organism as a tissue hormone and neurotransmitter acts and also in the plant kingdom and in bacteria is widespread . In humans and other mammals, histamine plays a central role in allergic reactions and is involved in the immune system , i. H. involved in the defense against foreign substances. It serves as one of the messenger substances in the inflammatory reaction to cause the tissue to swell. Histamine also acts as an important regulator in the gastrointestinal tract , in the regulation of gastric acid production and motility, as well as in the central nervous system in the control of the sleep-wake rhythm and appetite control . Biochemically , like tyramine , serotonin , dopamine , adrenaline , noradrenaline or octopamine , it is a biogenic amine . It is formed by splitting off carbon dioxide from the amino acid histidine and is stored in mast cells , basophilic granulocytes and nerve cells in particular .

The history of research into histamine began in 1907 with its synthesis as a chemical curiosity by the German chemists Adolf Windaus and W. Vogt. Just three years later, Henry H. Dale and George Barger succeeded in detecting histamine in ergot and thus discovering histamine as a natural substance. In the same year, Henry H. Dale and PP Laidlaw demonstrated that histamine was an endogenous substance. At the same time, Dale and Laidlaw clarified some of the basic functions of histamine. The biosynthesis of histamine from the amino acid histidine was also clarified by Dankwart Ackermann in 1910.

Daniel Bovet and Anne-Marie Staub discovered the first substances that inhibit the effects of histamine ( antihistamines ) in 1937 . Five years later, phenbenzamine and mepyramine were the first antihistamines to be used in therapy. In the early 1950s, the French pharmaceutical company Rhône-Poulenc developed the first neuroleptics as part of anti-histamine research. In 1972, James W. Black and co-workers succeeded in differentiating between H 1 and H 2 receptors. As further subtypes of the histamine receptor, the H 3 receptor was discovered in 1983 by Jean-Michel Arrang with the help of pharmacological methods and in 2000 the H 4 receptor by deciphering the human genome .

Histamine forms colorless, hygroscopic crystals that melt at 84 ° C and that easily dissolve in water and ethanol, but not in diethyl ether . The compound is in an aqueous solution as a mixture of two tautomers , N π -H -histamine and N τ -H -histamine.

Histamine has two basic centers, i.e. H. two groups of atoms with nitrogen atoms to which protons can be attached. Under physiological conditions, the aliphatic N α - amino group with its pK a value of 9.4 is preferably protonated , while the imidazole ring (pK a  = 5.8) only takes up a proton in a more acidic environment.

Biosynthesis of histamine from histidine

Histamine is synthesized in mast cells, cells of the epidermis and gastric mucosa and in nerve cells and stored in vesicles . In these cells, histamine is formed from the amino acid histidine by a pyridoxal phosphate- dependent decarboxylation using the enzyme histidine decarboxylase in a one-step reaction. The unspecific aromatic L-amino acid decarboxylase can also be involved in the biosynthesis of histamine to a lesser extent .

Histamine is broken down in the body in two different ways. In particular in the central nervous system, the enzyme histamine- N -methyltransferase is inactivated to N τ -methylhistamine . N τ -methylhistamine is oxidatively below about monoamine oxidases , diamine oxidases and aldehyde oxidases for N τ degraded -Methylimidazolylessigsäure. In the periphery, however, histamine methylation plays a subordinate role. Here the degradation takes place mainly via diamine oxidases and aldehyde oxidases to form imidazolylacetic acid . This is excreted through the kidneys after ribosylation . 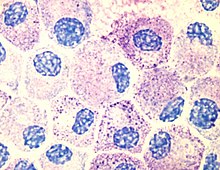 Histamine occurs in increased concentrations in the mast cells , the basophilic granulocytes and in the histamine-storing cells of the mucous membranes , the bronchi and the gastrointestinal tract . In these cells, histamine is stored in vesicles bound to heparin . Histamine is released from these vesicles in IgE- mediated allergic reactions of the "immediate type" (Type I) or by complement factors (e.g. in the event of an endotoxin- induced shock ). In addition to tissue hormones , drugs such as opiates , muscle relaxants as well as plasma expanders and X-ray contrast media can also cause the release of histamine. Another important storage location for histamine are the ECL cells of the gastric mucosa, which make up histamine through hormones and tissue hormones, such as B. gastrin , acetylcholine and PACAP ( pituitary adenylate cyclase activating polypeptide ) can be released.

In the human organism, histamine has a variety of functions, with particular emphasis on its involvement in defense reactions. At the molecular level, histamine mediates its functions by activating the histamine receptors H 1 , H 2 , H 3 and H 4 , which belong to the family of G-protein-coupled receptors .

Important contributions of histamine are its function in the defense against exogenous substances and its pathological involvement in the symptoms of allergies and asthma . Histamine is also one of the mediator substances in inflammation and burns . Here, histamine leads to itching, pain and contraction of the smooth muscles (for example in the bronchi). It causes an increased permeability of the vessel walls of small blood vessels and thus leads to hives . A histamine-induced activation of the transcription factor NF-κB and an associated increased release of further inflammatory mediators are also involved in this process. Histamine also causes adrenaline to be released from the adrenal glands . These effects are mediated in particular by activating H 1 receptors.

Histamine has a chemotactic effect on various cells involved in the defense against foreign substances, for example eosinophilic granulocytes and T cells . Activation of H 4 receptors is primarily held responsible for these effects .

In contrast to humans, histamine plays only a minor role in the development of itching in dogs and cats.

In the central nervous system , histamine is involved in triggering vomiting and regulating the sleep-wake cycle by activating H 1 receptors . Based on animal experiments, an antidepressant , anticonvulsant and appetite suppressant effect of histamine is discussed. It also seems to be involved in the regulation of body temperature, central control of blood pressure and pain perception. Via presynaptic receptors (especially H 3 receptors), histamine has a regulatory influence on noradrenergic , serotoninergic , cholinergic , dopaminergic and glutaminergic neurons by inhibiting neurotransmitter release in the central nervous system and in the peripheral nervous system . Histamine thus indirectly influences the effect of these neurotransmitters.

Studies are currently underway in Europe with histamine as a drug with a stimulating (vigilance-increasing) effect. The drug could be used in some time, for. B. come with pathological sleep-wake regulation disorders.

The tolerance limit for histamine in adult primates is approximately 10 mg. Larger amounts of histamine lead to poisoning, which is characterized by acute symptoms such as shortness of breath, drop in blood pressure, reddening of the skin, hives, nausea, vomiting, headache and diarrhea; 100 mg of histamine already lead to significant symptoms of intoxication. The tolerance limit could be significantly reduced in patients with histamine intolerance . Consuming large amounts of foods containing histamine, e.g. B. in a certain form of fish poisoning can lead to symptoms of poisoning, as can the simultaneous intake of MAO inhibitors and tyramine - or histamine-containing foods such as fish, meat, cheese, vegetables and wine.

Histamine is used for medical diagnostics , v. a. of atopy and allergies , as well as in the inhalative provocation test and for positive control in the intracutaneous test . In addition, drugs that block the release of histamine from mast cells ( mast cell stabilizers ) or the effect of histamine on histamine receptors ( antihistamines ) are also used in therapy. Allergic symptoms are treated symptomatically with mast cell stabilizers ( e.g. cromoglicic acid (DNCG), nedocromil or lodoxamide ) and with H 1 antihistamines (e.g. diphenhydramine , loratadine or cetirizine ). In addition, sleep disorders , anxiety disorders , nausea and vomiting are treated with H 1 antihistamines. H 2 antihistamines (such as cimetidine , ranitidine or famotidine ) are important antacids as inhibitors of gastric acid production .

An analogue of histamine is the vasodilatory betahistine , which is used as an antiemetic and antivertiginous ( i.e. against dizziness) v. a. used for Menière's disease and hydrops cochleae .

Use as a medicine

Under the trade name Ceplene, histamine is used in cancer immunotherapy as an injection solution in combination with interleukin-2 as a drug for the treatment of acute myeloid leukemia (AML), a rare cancer that affects the white blood cells . Because few patients suffer from this form of cancer, was Ceplene than 2,005 orphan medicinal reported ( "orphan drug"). The drug approval followed in 2008.

Histamine is approved for the treatment of acute myeloid leukemia in combination with interleukin-2 in cancer patients in first remission . Approval is limited to adult patients, although efficacy has not been fully demonstrated in patients over 60 years of age.

As an absolute contraindication for the use of histamine in cancer immunotherapy hypersensitivity reactions apply, moderate and severe congestive heart failure (NYHA III and IV) as well as the concurrent systemic administration of steroids, the antihypertensive drug clonidine or magensäuresekretionshemmender drugs from the group of H 2 antihistamines . Cancer immunotherapy with histamine and interleukin-2 is also contraindicated in patients with an allogeneic stem cell transplant . As indications of harmful effects on the offspring were found in preclinical studies on rodents after the use of histamine, its use in pregnant and breastfeeding women is contraindicated.

Histamine as a defense substance

Histamine is also produced and stored as a defense substance in some plants and animals. For example, the stinging nettle stores histamine in its stinging hair, along with other substances, which is released when touched. The grasshopper Poekilocerus bufonius ( Pyrgomorphidae ) releases a secretion that contains about 1% histamine in addition to cardenolides . Histamine is also contained in the skin gland secretion of the southern frogs . In addition, animal and plant defense substances, such as the mast cell degranulating peptide (MCD peptide) of bee venom , can release histamine from the mast cells of higher animals and thus trigger an inflammatory reaction.