Position of the hypothalamus (3D animation) 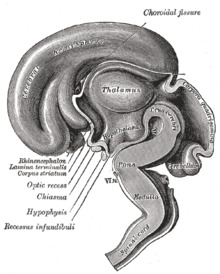 Location of the hypothalamus, embryonic stage in the sagittal section

The hypothalamus, in cooperation with the pituitary gland, controls other endocrine glands . It forms special control hormones ( releasing and inhibiting hormones ), various neuropeptides as well as dopamine, and in this way significantly regulates the vegetative functions of the body. 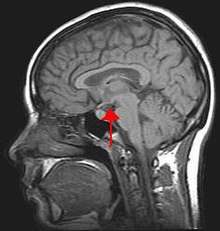 Location of the hypothalamus

The hypothalamus is the most important control center of the autonomic nervous system , which itself consists of various homeostatic control circuits . The hypothalamus is the most important brain region for maintaining the internal milieu (synonym: homeostasis ) and its adaptation when the organism is exposed to stress. Even the slightest disturbance of this relatively small, extremely important diencephalon area affects the viability of the individual. The entire vegetative system has the following tasks, among others:

In order to carry out its tasks, the hypothalamus has numerous neuronal connections to other brain centers. In addition, it controls the release of hormones from the adenohypophysis (anterior pituitary lobes) via liberins (releasing factors or releasing hormones) and statins (release inhibiting factors or release inhibiting hormones ) or produces the hormones itself that are present in the neurohypophysis (posterior pituitary lobes), which are also responsible for the Hypothalamus is counted to be released into the blood.

In the control of body temperature is Nucleus preopticus involved. It is located at the rostral end of the hypothalamus in the immediate vicinity of the septum region and the organum vasculosum laminae terminalis . The preoptic nucleus GABAerg efferently projects into the periaqueductal gray (PAG) and the raphes magnus nucleus , from where thermogenesis is controlled. The preoptic nucleus also influences the release of thyreoliberin (TRH) from the paraventricular nucleus . TRH in turn stimulates the thyrotropin -Ausschüttung (TSH), resulting in an increase in metabolic activity on the thyroid hormones leads.

The paraventricular nucleus but above all the supraoptic nucleus produce the nonapeptide vasopressin (synonym: antidiuretic hormone , ADH or adiuretin). Via axonal transport , this reaches the posterior lobe of the pituitary gland (synonym: neurohypophysis ) and is there released into the pituitary portal circulation. ADH leads to an increased absorption of water from the primary urine. This leads to a reduced excretion of water via the kidneys, which counteracts hyperosmolarity and increases blood pressure.

Several nuclei are involved in the regulation of food intake. It is very complex and there are different theories. The two most important are mentioned here:

The arcuate nucleus and paraventricular nucleus are involved . When the body's fat stores are full, the fat cells release the hormone leptin . This inhibits the release of neuropeptide Y (NPY) in the arcuate nucleus . NPY has an inhibitory effect on the paraventricular nucleus and promotes the feeling of hunger. Leptin thus inhibits the inhibitory effect of NPY. At the same time, leptin stimulates the release of alpha-MSH, a peptide hormone that stimulates the paraventricular nucleus via the MC-4 receptor and signals satiety. Functional failure of the MC-4 receptor due to mutations leads to severe obesity and early-onset type II diabetes mellitus even in childhood .

The hypothalamus is also involved in the regulation of sleep and the circadian rhythm : the nucleus tuberomammillaris produces the neurotransmitter histamine and a peptide called orexin . Orexin acts on the lateral hypothalamus via certain receptors and leads to increased alertness. Mutations in this receptor are thought to be responsible for narcolepsy . In addition, orexin is used as a wake-up drug z. B. used for fighter jet pilots. It is noteworthy in this context that insomnia leads to increased food intake and simultaneous weight loss, and orexin has an appetite-stimulating effect. The nucleus preopticus venterolateralis (VLPO) of the hypothalamus is also involved in the induction of sleep. Lesions in this core lead to insomnia .

The suprachiasmatic nucleus (SCN) contains direct afferents from the retina . Researchers suspect this is where the “internal clock” is located, neurons that are responsible for the circadian rhythm. The SCN has a very strong control over sympathetic activity . Via this vegetative system, the SCN stimulates the release of melatonin from the pineal gland . Melatonin is increasingly released in the evenings and helps induce sleep. The highest concentration is found in the blood at three in the morning. The anatomical connection from the SCN to the pineal gland leads via the paraventricular nucleus to the lateral horn of the thoracic cord . From there, sympathetic nerve fibers reach the pineal gland via an interconnection in the superior cervical ganglion, accompanying the arterial vessels. This releases melatonin in a circadian manner with a maximum at three in the morning.

Influence on sexual behavior and puberty

The influencing of sexual behavior is u. a. the corpus mamillare involved. It is part of the Papez circle and is attributed to the limbic system . The medial preoptic nucleus is involved in the variety of sexual behavior.

Furthermore, magnocellular neurosecretory cells of the paraventricular nucleus emit the hormone oxytocin into the bloodstream via projections in the neurohypophysis (synonym: posterior pituitary lobe ) . Oxytocin is involved in the contraction of the uterine muscles during childbirth , triggers the secretion of milk from the mammary glands and has a positive effect on the partner and mother-child bond.