Aldosterone is a natural steroid hormone that is formed from cholesterol and is one of the mineralocorticoids ; since production takes place in the adrenal cortex , it is also a corticosteroid . Aldosterone works particularly in the kidneys , where it inhibits the excretion of sodium and increases the excretion of potassium ; by increasing the sodium level, it increases blood volume and thus blood pressure . The synthetic aldosterone derivative fludrocortisone is used as a medicinal substance; However, the antagonists of aldosterone, which belong to the potassium-sparing diuretics and are prescribed for heart failure, for example, are of greater importance .

Progesterone is formed from cholesterol via the intermediate pregnenolone through oxidation at the C3 atom . Further hydroxylations at positions 21 β , 18 β and 11 β form 18-hydroxycorticosterone. In a subsequent oxidation of the hydroxyl group on the C18 atom, the aldosterone is created. 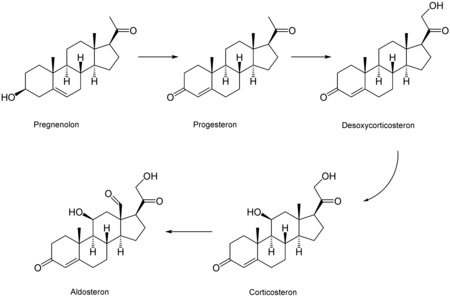 Reaction pathway for the synthesis of aldosterone starting from pregnenolone .

Aldosterone is produced in the zona glomerulosa - the outermost layer of the adrenal cortex . The release of aldosterone increases due to a decrease in blood volume and blood pressure (mediated by angiotensin II via AT1 receptors ) and hyperkalaemia (too high a potassium concentration in the blood). The sodium concentration in the blood influences the aldosterone synthesis in opposite directions: if the sodium in the blood rises, the biosynthesis is inhibited; if the sodium falls , it is stimulated. ACTH stimulates aldosterone synthesis, while atrial natriuretic peptide (ANP) inhibits the secretion. The biosynthesis of mineral corticoids is stimulated by substances with beta-adrenergic effects and inhibited by dopamine . 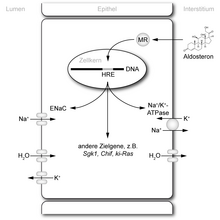 MR activation leads to increased reabsorption of Na + and water via the collecting duct epithelium.

In the connecting tubules and collecting ducts of the kidney, aldosterone activates mineralocorticoid receptors (MR) and increases the incorporation of sodium channels (ENaC) into the luminal membrane and sodium transporters (Na + / K + -ATPase) into the plasma membrane to the interstitium. This facilitates the transport of sodium across the epithelium, which results in increased water reabsorption. At the same time, there is an increased excretion of potassium and ammonium ions and protons . Overall, aldosterone causes an increase in the extracellular volume, a decrease in the potassium concentration and an increase in the pH value in the blood .

Its effectiveness can be inhibited by aldosterone antagonists such as spironolactone , canrenoate and eplerenone .

The effectiveness of aldosterone on the mineral balance is about 1000 times higher than that of cortisol , because the cortisol in the aldosterone-sensitive cells is converted to cortisone by the 11 β -hydroxysteroid dehydrogenase type 2 and cannot activate the receptor. The receptor affinity is the same.

Aldosterone is regulated by the renin-angiotensin-aldosterone system . Furthermore, the increase in potassium concentration can activate the synthesis of aldosterone.

Blood pressure regulation is an important role of aldosterone and the renin-angiotensin-aldosterone system. In addition, aldosterone seems to be necessary in coping with life-threatening stressful situations .

Short-term effects of aldosterone occurring within minutes or hours serve to maintain the fluid , electrolyte and acid-base balance ( milieu interior ) by increasing the reabsorption of sodium and increased excretion of potassium and protons ( physiological effects).

Chronically elevated aldosterone levels over days, weeks and months, on the other hand, have unfavorable effects. There is a potassium deficiency (hypokalaemia) , an increase in the pH value ( alkalosis ), high blood pressure and increased formation of connective tissue ( fibrosis ) in the heart and kidneys , which can ultimately lead to chronic heart and kidney failure ( pathophysiological effects).

A deficiency of aldosterone can occur, for example, in the context of an autoimmune disease ( Addison's disease ), an adrenogenital syndrome (AGS) or tuberculosis of the adrenal glands.