This article deals with the SI unit of gram for mass; for further meanings see grams (disambiguation) .

A gram is a physical unit of measurement for mass , the unit symbol is g . One gram is one-thousandth of a kilogram (kg), the official SI - base unit for mass. In this way, as 0.001 kilograms, the gram is defined in national unit laws and standards.

Using prefixes for units of measure one can write:

Common units in the English-speaking area:

The atomic mass unit (also referred to as Dalton , Da) is used especially in chemistry and atomic physics . It is derived from the mass of a proton , but defined slightly differently.

The kilogram and thus the gram are determined by the fact that Planck's quantum of action h is assigned a fixed value.

A first definition of gram and kilogram comes from the time of revolutionary France and refers to water that is to be measured in metric units of volume (one liter for the kilogram). To put it precisely: one gram of distilled water at a temperature of 3.98 ° C and an air pressure of 101.325 kPa takes up the volume of one cubic centimeter or one milliliter . In 1889 , the thousandth part of the original kilogram , which is kept in Paris , was determined as one gram. This definition was valid until the revision of the International System of Units in 2019.

In deviation from the other rules in the SI, decimal parts and multiples of mass units are not formed from the SI base unit kilogram, but by deriving from the gram. For powers of ten greater than kg, the use of the non-SI unit ton (1 t = 1000 kg = 1 Mg) is permissible and customary, which in turn can be provided with prefixes such as kiloton (kt) or megaton (Mt). 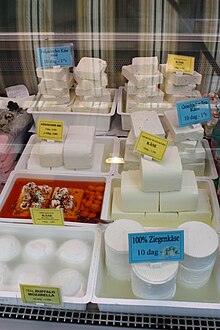 The decagram has the SI -conform unit symbol "dag". In Austria, the decagram (= 10 grams ) was introduced by the law of July 5, 1950 as a legal measure for the mass with the symbol "dkg" before the SI was created, whereby "Deka" was incorrectly abbreviated to "dk". In 1973 the sign was changed to "dag" according to the rules in the SI. The original sign remained temporarily admissible until December 31, 1977. In Austria (and also in the other successor states of Austria-Hungary ), the unit of measurement decagram is often used, especially when shopping for groceries and in recipes, and is often shortened to “deca” in colloquial terms. In a way, it continues the metric plumb line .

In Italy the hectogram ( ettogrammo, colloquially to etto, plural etti shortened, = 100 grams) is a common unit of measurement when shopping for groceries.

In the past, pharmacists also used weights in decigrams (1 dg = 0.1 gram) and centigrams (1 cg = 0.01 gram), although it was advisable to use these names in medical prescriptions (as well as milligrams) as early as the late 19th century ) and express the mass as a decimal number in grams.