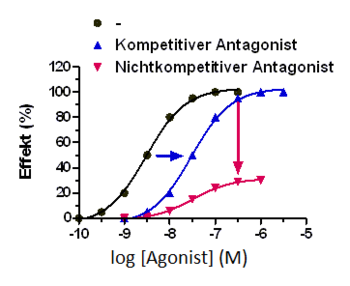 An antagonist (from ancient Greek ἀνταγωνιστής antagōnistēs , German 'rival, enemy [in war, in court]' ) is a substance in pharmacology that inhibits an agonist in its action without itself triggering a pharmaceutically significant effect. Corresponding agonists can be hormones or neurotransmitters , for example . Active ingredients that increase the effect of another are called synergists .

According to their mode of action, antagonists are differentiated based on their competitiveness :

The potency of an antagonist can be given as the antagonist concentration, for example in the form of the mean inhibitory concentration ( IC 50 ), which leads to a half-maximal inhibition of the effect triggered by an agonist, or more characteristically with the help of the Schild plot as the pA 2 value . The affinity of an antagonist for the receptor (pK i or pK B ) is also a good measure of its potency.