Examples of different types of hormones

Epinephrine (adrenaline), a hormone from the group of catecholamines

Estradiol as an example of a steroid hormone

A hormone is a biochemical messenger substance that is produced by special cells (in endocrine glands or cell tissues ) and released into the body's circulation as an endogenous active ingredient. This signal substance then sets in motion specific effects or regulatory functions on certain cells of the successor organs , especially in certain metabolic processes . The biological process triggered by this represents a special case of signal transduction . Chemically, hormones are low-molecular compounds or occasionally peptides (so-called peptide hormones ).

The science of researching hormones is known as endocrinology . Accordingly, an endocrinologist is a scientist or doctor who is engaged in research into hormones, their modes of action and diseases of hormonal processes. The word hormone , used in 1906 for the active substances of the internal secretory glands, is derived from the ancient Greek ὁρμᾶν hormān ' to drive, excite'.

Even in gentile society , various organs were consumed by animals to heal diseases. It was also found that in the Ebers Papyrus , in the Corpus Hippocraticum and in other works by Roman and medieval doctors, there were sections that represented the use of animal organs to treat diseases (e.g. animal testicles to increase potency). In the 18th century, Théophile de Bordeu put forward his theory of substances formed in certain organs (such as the gonads) that have an effect on distant body regions via the bloodstream. Until the 18th century, pharmacies also contained a wide range of medicinal products made from organs, organ juices and excretions from animals, which were already used in the context of organ therapy (or organotherapy). The discovery of the bloodstream subsequently created the idea that these organs produce specific substances that circulate in the blood throughout the body. In 1830 Johannes Müller made a distinction between glands with internal and external secretion. This was Arnold Adolf Berthold confirmed by by a testicle transplant for capons an endocrine gland discovered. Charles-Édouard Brown-Séquard demonstrated the necessity of these glands for survival by means of an adrenectomy in experimental animals. In 1889, he also recommended the injection of testicular extracts in humans to improve physical and mental well-being. However, these extracts showed no effect. Nevertheless, Charles Brown Sequard is considered the founder of organ therapy. In the period that followed, additional extracts from adrenal glands, thyroid glands, ovaries and bull testicles were introduced into therapy. The first hormone ( adrenaline ) was discovered in 1901 and synthesized for the first time three years later.

The term hormone (from English hormone , formed from the Greek hormā́n ( ὁρμᾶν ) "set in motion, drive, stimulate") was coined in 1906 by Ernest Starling and William Maddock Bayliss , following a suggestion made by one of their colleagues in 1905 . The classic hormone term originates from this time, according to which hormones are endogenous substances that are released from a gland (glandular) into the bloodstream ( endocrine ) in order to achieve a specific effect as a "chemical messenger" in other organs (examples: thyroid, Adrenal glands, pancreas). In analogy to this, messenger substances in arthropods and molluscs are regarded as hormones that reach their target site via the hemolymph . This classic definition is still used today, but has been modified and expanded many times.

The term “hormone” was expanded to include aglandular hormones, which, like classic hormones, are released endocrine disrupting but not from glands. Examples include calcitriol , erythropoietin and the atrial natriuretic peptide, as well as substances that are produced by nerve cells and released into the blood ( neurohormones ). The body's own substances from specialized cells, which after being released by bypassing the bloodstream, achieve their effect directly in the immediately adjacent tissue ( paracrine ) ( tissue hormones ) are sometimes referred to as hormones.

The cytokines that regulate the growth, proliferation and differentiation of cells are differentiated from the hormones on the basis of their focus of action . Cytokines are secreted aglandularly by cells whose task is not solely to secrete this substance and typically have an autocrine or paracrine effect. Also neurotransmitter that of nerve cells across the synaptic cleft to be submitted also to nerve cells their effect to unfold, are not typically referred to as hormones.

Hormones were discovered in the early decades of the 20th century; the term hormone was coined in 1905 by Ernest Starling . He discovered that when stimulated by hydrochloric acid, a substance was released from the intestinal wall that stimulated pancreatic secretion (an eyewitness report). He called this substance secretin. Hormones only work on certain target organs. Only there are special hormone receptors to which the hormone molecules bind. These receptors are often membrane proteins that bind the hormone on the cell surface and trigger signals on the inside of the membrane after hormone binding. Some hormones (thyroid hormone, vitamin D3 and steroid hormones, s. U.) Reach their receptors only when the cell membrane have permeated by diffusion. Their receptors are located in the cytoplasm or in the cell nucleus. After the hormone and receptor have bound, the receptor / hormone complexes aggregate to form receptor dimers, penetrate the cell nucleus and control gene activation there.

Hormones are formed by special hormone-producing cells: These are located in glands in the pituitary gland ( pituitary gland ), the pineal gland , the thyroid gland , the adrenal gland and in the islet cells of Langerhans in the pancreas . Some hormones are also produced by nerve cells; these are called neurohormones or neuropeptides . Hormones of the gastrointestinal tract are found distributed in the Lieberkühn crypts . In addition, angiotensin precursors are formed in the liver . Sex hormones are produced by specialized cells in the female or male genital organs: theca and granulosa cells in women and Leydig cells in men.

Often there are hormonal axes:

The release of hormones (with the exception of paracrine stimulators) occurs near blood vessels that have many small windows through which hormones can pass directly into the blood. Areas specialized in the secretion of neuropeptides are referred to as neurohemal organs . The binding of a stimulus for hormone release often leads to an increase in the intracellular calcium concentration in the cell. This increase in calcium allows the cell organelles, in which the prefabricated hormones are located, to fuse with the cell membrane. As soon as the organelle membrane is fused with the cell membrane, the hormones have free access to the space outside the cell and can migrate to the neighboring blood vessels through the fenestrated blood vessel wall.

The hormones found in plants are called phytohormones . They share with animal hormones the property of developing a signaling effect over a greater distance and being effective in low concentrations.

The pheromones occurring in animals are messenger substances between individuals. They are not tied to the organism in which they were formed and can signal over great distances. 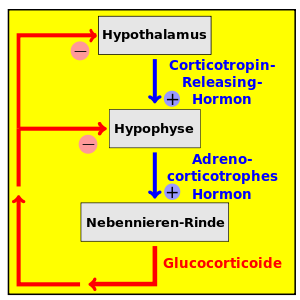 Example of a feedback mechanism

According to chemical classification

There are special hormone glands in which hormone-producing cells are closely connected. Many hormones, however, are produced by cells that are not exclusively connected to hormone-producing cells. The G cells that produce gastrin are isolated in the pyloric antrum of the stomach. It is similar with the cells in the intestinal wall for the hormones cholecystokinin, secretin or somatostatin.

The decisive factor for hormone production is not the external environment of a cell, but the equipment inside with the characteristic enzymes.

There are two types of hormones:

A very common principle of signal transduction is G-protein- coupled 7-transmembrane helix receptor. The fact that a ligand binds to the receptor on the outside of the cell (which spans the cell membrane) triggers a conformational change in the receptor , which then enables a heterotrimeric G protein to bind to the receptor in the cell. This activates the protein (e.g. Gs) and forms the second messenger cAMP like an enzyme . This in turn can relax smooth muscles via PKA or, for example, promote the expression of certain genes via CREB .

An important class within the fat-soluble hormones, in addition to the thyroid hormones, are the steroid hormones. Steroid hormones are all derived from cholesterol . The two main places of steroid hormone production are the adrenal cortex and the gonads (testicles and ovaries) for the sex hormones . The very small hormonally active nitric oxide (NO) is also counted among the lipophilic hormones because of its high membrane permeability.

Chemical structure of indole-3-acetic acid , the most important auxin

Hormones in the environment

Special attention deserves the fact that hormones are increasingly being released into the environment and are later taken up again by humans via the plant and animal food chain in unfavorable and uncontrolled doses. One example is the hormones in the birth control pill , which sewage treatment plants do not break down. They are discharged into the rivers with the purified water.

Since the sewage treatment plants are not designed for the introduction of drugs, drugs and their residues can get back into the drinking water almost unhindered via the surface waters . More than 180 of the 3,000 active substances approved in Germany can be detected in German waters: from hormones and lipid-lowering agents to painkillers and antibiotics to X-ray contrast media .

Certain pollutants such as DDT , PCB , PBDE or phthalates also act like hormones and influence the first month, which begins ever earlier in girls.