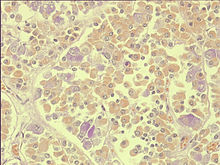 The adenohypophysis has three parts:

Glandotrope ("acting on glands", from Latin glandula "gland") hormones are control hormones of the anterior pituitary gland, which regulate the hormone production of other endocrine organs :

The latter two hormones are also grouped together as gonadotropins .

Effector hormones that do not act on the endocrine glands, but directly on the successor organs, are:

Using a light microscope , three cell types can be distinguished through different staining behavior in the adenohypophysis. These are acidophilic, basophilic and chromophobic cells.

These acid-stainable cells ( acidophilic cells ) are most common in the adenohypophysis. Granules in the cytoplasm that can be colored red are particularly characteristic . They only form non-Englandotropic hormones and can be divided into two subgroups:

Because of the secretion granules enclosed in the cytoplasm, this cell type can be stained dark purple-blue with basophilic dyes. Here, too, different cell types can be distinguished depending on the hormone production, with all except the MSH-producing cells forming glandotropic hormones:

Chromophobic cells cannot be stained because they have no granules. The chromophobic cells include stem cells , stellate cells, which are similar to the glial cells in the nervous system, and used endocrine, formerly azido or basophilic cells that no longer have granules.