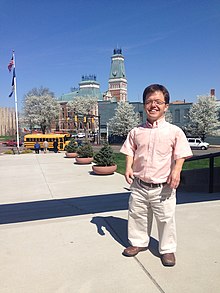 Short stature , short stature or microsomia in humans is a term for a non-standard, shorter body length growth that can be caused by a variety of congenital or acquired growth disorders .

A significantly below average growth in length is referred to in medicine as short stature . The former medical term "short stature" is no longer used due to the negative connotation. Designations such as “dwarf” or “midget”, which are sometimes used colloquially, even though most of those affected perceive them as discriminatory, also have negative connotations.

In the medical sense, children are short stature when their height falls below the third percentile of the growth curve for the corresponding age or falls below the mean value by more than two standard deviations , i.e. only 3% of their peers are shorter. In most cases, however, this short stature has no disease value, because even healthy children can fall below these limits. The child's development over time is therefore more important than the absolute value. Its growth development should follow the percentiles and not cross them down.

In the case of familial short stature, the parents of the person concerned are also short, and the final height of the child is in the range that can be expected based on the size of the parents. There are also ethnic groups in which the average height of men is less than 150 cm, which means that they are naturally short.

The constitutional delay in development results in a delayed development of bone maturity and a delayed onset of puberty. In many cases it occurs in families. Boys are affected twice as often as girls. In these cases a normal height can be achieved, only with a delay.

Those affected are very small at birth, which is due to various factors during pregnancy. Most children can catch up with the stunted growth, but some remain short.

In the context of Ullrich-Turner syndrome , in which those affected only have one functioning sex chromosome (X), short stature is just one of many characteristics. People with Down syndrome are sometimes short too .

Syndromes such as Noonan's syndrome , Silver-Russell syndrome or Prader-Willi syndrome are complex clinical pictures in which short stature is just one symptom among many others.

Malnutrition can slow down growth in children.

Growth retardation can be caused by chronic diseases such as heart or liver disease.

Some growth disorders are due to hormonal disorders such as a lack of growth hormone , diabetes mellitus or an underactive thyroid . These disorders are usually easy to treat, so that affected children can achieve a final height in the normal range.

In phosphate diabetes , the body excretes too much phosphate, which impairs bone growth and causes disproportionate short stature. Other metabolic disorders, for example disorders of protein metabolism or fat metabolism , can also cause short stature.

Short stature can also have psychosocial causes. Mention should be made here of psychosocial deprivation and depression .

Medical therapies that put a lot of strain on the body can also be a cause of short stature: radiation therapy , chemotherapy or high-dose glucocorticoid therapy.

Stools are an important aid for short people

In everyday life, short people are confronted with many barriers, since the environment is geared towards people of average height. For example, ATMs, kitchens, toilets and sinks can only be used by many short people with aids. Low stools and steps play a special role here, as they can be used in many ways to bridge the height gap.

Stools are also helpful as footstools when sitting, because when sitting on an average chair, the legs of short people dangle in the air, which is painful and uncomfortable in the long run and can also impair fine motor skills when working. Specially adapted therapy chairs are therefore also used as aids in school or at work.

In order to be mobile, some small children and also adults resort to specially adapted scooters or bicycles, because depending on the type of short stature, walking long distances can cause problems.

With appropriately retrofitted vehicles, most of the short stature can drive a car without restriction. As a rule, at least one pedal extension and an individually adapted seat are required .

Regular exercise can help prevent back and joint problems, which are particularly common in skeletal dysplasias. The joy of movement and the sporting ambition of small children is often limited early on by the fact that they are measured by the same standards as non-disabled people and quickly reach their limits. Depending on the short stature, there are restrictions in particular for apparatus gymnastics, running sports, jumping sports and ball sports.

In general, however, there is no sport that can be ruled out for small people. According to a non-representative survey by the BKMF eV (Bundesverband Kleinwüchsige Menschen und their Families) in 2008, the most popular sports are swimming (42% of those surveyed), football (20%), cycling (10%), fitness training (8.2%) , Riding (6.7%), karate (5%) and dancing (5%), whereby only 8% of all respondents practice the respective sport in a disabled sports club.

Small people are also represented in competitive sports. In Germany they are organized in the German Disabled Sports Association. The Paralympic Games have their own impairment category for children of stature. Successful small Paralympians include Niko Kappel , Mathias Mester and Tiffany Thomas Kane .