The title of this article is ambiguous. Further meanings are listed under pituitary gland (disambiguation) .

Position of the pituitary gland (arrow) 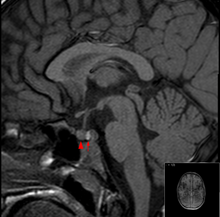 Pituitary gland on MRI (T1, native): The arrow points to the neurohypophysis (signal-intensive / bright), the arrow head to the adenohypophysis.

The pituitary gland (also Latin hypophysis , from ancient Greek ὑπόφυσις hypóphysis "the plant attached below") or pituitary gland , Latin glandula pituitaria , is a pea-sized hormonal gland that is "hanging" at the base of the brain , about the size of a pea and controlled by the hypothalamus Plays a role in regulating the hormonal system in the body. It is a kind of interface with which the brain regulates processes such as growth , reproduction and metabolism by releasing hormones . The pituitary gland sits on the Turkish saddle ( Sella turcica ), a bony depression in the middle cranial fossa at the level of the nose.

The pituitary gland is supplied with blood through four arteries. From the pars cavernosa of the internal carotid artery arise two inferior hypophysial arteries, which form a capillary network, especially in the area of ​​the neurohypophysis, into which the corresponding hormones are released. From the pars cerebral arteries of the internal carotid artery two spring hypophysiales the superior, in the region of the median eminence and the pituitary stalk Primärplexus form, in which some areas of the hypothalamus their hormones, Liberine and statins , secrete . They reach the secondary plexus , which is located on the adenohypophysis, via the venae portal hypophysiales . In this secondary plexus, the hormones of the hypothalamus reach their place of action and the hormones of the adenohypophysis are released from where they flow into the cavernous sinus and thus into the body's circulation in order to develop their effects.

The intermediate pituitary lobe is among other things the place where melanocyte-stimulating hormones (MSH, melanotropins) are produced.

In 1905, the Italian pathologist Gaetano Fichera (1880–1935) discovered a strong growth inhibition in chickens from which the pituitary gland had been removed, as was later also demonstrated in mammals. Herbert M. Evans then achieved a kind of giant stature in California by administering pituitary extract.

Underactive pituitary gland ( pituitary insufficiency , panhypopituitarism ) can have a variety of causes.

Tumors of the adenohypophysis are called pituitary adenomas . They often cause excessive hormone production. Large tumors can press on the optic nerves, causing significant visual disturbances. If left untreated, blindness is the result. Such tumors are often surgically removed through the nose, and the patient can usually see normally again immediately after the operation.

The physical examination is followed by hormone measurements and function tests. If there is clinical suspicion, hormone examinations should be carried out by an endocrinologist prior to imaging procedures, as imaging procedures often give false positive results (" incidentomas "). X-rays of the sella turcica in the lateral image of the bony skull, computer tomography , magnetic resonance tomography and somatostatin receptor scintigraphy are used as imaging methods .

Other tumors that can occur in the area of ​​the pituitary- diencephalon (in addition to eosinophilic, basophilic and chromophobic tumors of the anterior pituitary) include craniopharyngiomas , pituitary duct cysts , gliomas , teratomas and Schüller-Christian granulomas .