The plexus ( Latin for “braid”; plural “the plexus” with a long u ) describes a network of nerve fibers or blood vessels in anatomy . A nerve plexus or nerve plexus is created when nerve branches protruding from the spine unite before the nerve fibers bundled in a plexus branch again, for example into the internal organs or the extremities .

Voluntary motor and sensory nerve fibers form one on each side: 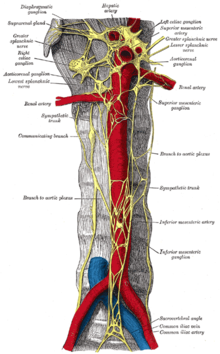 Vegetative plexuses and ganglia of the abdomen.

The largest plexuses of the autonomic nervous system are:

The first two together are also called the solar plexus or plexus solaris . They contain sympathetic fibers for the bowels in the abdomen: stomach, liver, spleen, pancreas, kidneys, adrenal glands, small intestine, initial part of the large intestine

They are located at the branches of the three large arteries, the celiac trunk, superior / cranial mesenteric artery and inferior / caudal mesenteric artery from the abdominal aorta . Smaller plexuses go from them to the individual organs . The sympathetic fibers come from the spinal cord in the chest and lumbar region, the parasympathetic fibers from the vagus nerve and from the cross part of the spinal cord.

Vegetative plexus also arise from interweaving of the vegetative nerve fibers in the immediate vicinity of the end organs:

The intestinal nervous system consists of scattered nerve cells in the wall of the entire trunk intestine and causes peristalsis . This over the entire hull intestines scattered neurons are also called Plexus, however, correspond morphologically not the definition of a vegetative plexus (see above). A distinction is made between a submucosal plexus (Meissner) in the tela submucosa of the trunk intestine and a myenteric plexus (Auerbach) in the tunica muscularis, between the circular stratum and the longitudinal stratum of the smooth intestinal muscles.