The title of this article is ambiguous. Further meanings are listed under Stomach (disambiguation) . 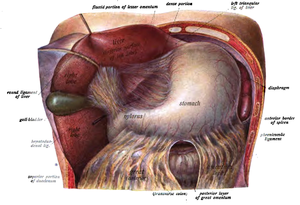 Anatomical drawing of the human stomach ( stomach ) and the surrounding structures, the liver has been pulled to the right and above

The stomach (from Middle High German mage ; ancient Greek γαστῆρ gaster , Latin ventriculus ; also Greek-Latin stomachus ) is a digestive organ of almost all animals . The most primitive form is the gastric space of the cnidarians , which is also an excretory organ. The stomach is a hollow organ made of muscle tissue that is lined with a mucous membrane on the inside . Unlike the einhöhligen stomach of humans and most animal species, the stomach has in ruminants and birds more defined cavity systems ( mehrhöhliger stomach ) as well as highly specialized organs in insects (honey stomach, Saugmagen ). Gastric are z. B. the carp fish (this is interpreted as an original adaptation to snail and mussel food, whose calcareous shells render stomach acid useless).

The capacity of the human stomach varies from person to person and is around 1.5 l. In this cavity, the food pulp is mixed with the gastric juice , which essentially consists of the protein-splitting enzyme pepsin and hydrochloric acid . The stomach also brings the pulp to the same temperature, and also layers and stores the pulp. At rest, the glands secrete about 10 ml gastric juice per hour. When eating food, the formation of gastric juice can be increased up to 1000 ml per hour. The formation is controlled both by nerve impulses (especially before eating) and by hormones . By muscular contractions ( peristalsis ) of the digested food will continue to Porter transported. As a sphincter (sphincter muscle), this forms an occlusion between the stomach and intestines and can open about 13 mm for the thickened food pulp ( chyme ) to pass through . This happens regularly in order to convey the food pulp evenly into the duodenum following the gastric outlet .

The actual digestion and absorption takes place in most animals and humans in the intestine or, more specifically, in the small intestine . In the stomach, it is mainly the proteins that are pre-digested into so-called polypeptide chains. The enzymes necessary for protein digestion, pepsin and cathepsin, are extremely active due to the low pH value. They are secreted by the cells of the stomach as inactive precursors ( pepsinogen ) and only activated when they come into contact with gastric acid. For the most part, fats pass the stomach unhindered, but they are softened (liquefied) by the peristalsis . Carbohydrates pass the stomach just as unhindered, as the enzymatic cleavage of the α (1-4) -glycoside bond of amylose by α-amylase (from saliva) is inhibited again by the acidic pH value in the stomach .

The acidic gastric juice effectively prevents the survival of most bacteria and thus protects against infections . For a long time the school of thought that the extremely acidic environment of the human stomach growth of microorganisms was not possible in principle. However, with the discovery of Helicobacter pylori in the gastric mucosa in 1983, this view had to be revised. From then on, H. pylori was the only exception - a bacterium that is able to settle below the protective layer of mucus. In 2005/2006, however, scientists at Stanford University were able to prove that the flora (see intestinal flora ) is significantly more complex than previously assumed: They discovered a total of 128 other types of bacteria that colonize the stomach, including a relative of the extremophilic genus Deinococcus . A total of around ten percent of the identified microorganisms differ genetically significantly from all previously known bacteria.

The pH value in the stomach is often mistakenly compared to concentrated acid. The gastric juice also has a very low pH value of 0.8 to 1.5, but the concentration of hydrochloric acid is lower. This low pH value only applies to an empty stomach. The value increases with food intake and can rise to 4.5 to 6.5 , depending on the buffer capacity of the chyme .

The stomach enables living things to get by with a few larger meals a day. He is able to adapt his wall tension to the respective amount of content ( accommodation ). The gatekeeper ( pylorus ) ensures that all substances remain in the stomach long enough and that the digestive juices are adequately mixed with them. The chyme is then fed slowly and evenly to the intestine.

Structure in humans and animals with a single stomach 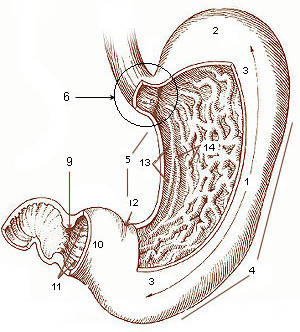 Macroscopically, it is subdivided into the following areas:

The shape and position of the stomach is not constant, but rather depends on its filling and the position of the person. The pars cardiaca is relatively strongly attached by connective tissue, while the pylorus, which is attached only to the ligamentum hepatoduodenale , lowers when the stomach contents are larger, whereby the stomach forms the typical hook shape. In women, the stomach is usually lower and steeper than in men.

Viewed microscopically, the stomach consists of:

For the secretion of hormones and other secretions, the stomach has various types of cells in its mucous membrane, which are located at typical places in the stomach, in particular

The stomach arises as a spindle-shaped enlargement of the foregut (the front section of the primitive intestinal tube of the embryo ). This is attached to the back or abdominal wall of the body via two mesenteries ( mesogastrium dorsal and ventral ). The stomach primordium, which is initially in the longitudinal axis of the embryo, widens on the back to form the major curvatura and bulges on the abdomen to form the flat, concave minor curvature.

Blood supply to the stomach 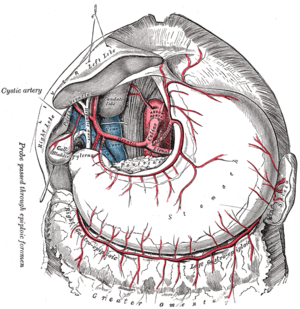 Blood supply to the human stomach

The stomach is supplied arterially via the celiac trunk . This short vascular trunk branches off directly from the aorta and branches into three main branches: the common hepatic artery , the left gastric artery, and the splenic artery . The stomach is supplied directly via the left gastric artery or indirectly via further branches of the other two branches. The upper part of the lesser curvature receives its oxygen-rich blood directly from the left gastric artery. It converges with the right gastric artery , which originally supplied the lower part of the lesser curvature from the common hepatic artery. Both run on the stomach in the small network ( omentum minus ), where they meander along the right side of the stomach. Also originally arising from the common hepatic artery, the right gastric artery supplies the lower half of the greater curvature. It converges with the left gastroomental artery , which in turn originates from the splenic artery. Both run on the stomach in a large network ( omentum majus ). In addition, the arteria splenica gives off some arteriae gastricae breves , which are responsible for the supply of the fundus, as well as an arteria gastrica posterior , which ensures the blood flow to the back wall of the stomach.

In ruminants , the actual stomach, which is lined with a glandular mucous membrane , referred to here as the abomasum , is preceded by three forestomach sections. These are rumen , reticulum and leaf stomach . They have a glandless mucous membrane. The microbiological breakdown of cellulose as well as the first resorption processes take place in these pre-stomachs .

The bird's stomach is divided into two sections. In the actual glandular stomach ( ventriculus glandularis or proventriculus ) enzymes and hydrochloric acid are also released. The gizzard ( ventriculus muscularis ) is located downstream of this glandular stomach . It consists of strong muscles and is used to mechanically shred food, replacing the function of teeth and chewing . The glandular glands secrete a secretion that hardens into a rubbing plate ( koilin layer ) due to the hydrochloric acid of the proventriculus . In addition, many birds ingest stones (or other hard particles such as mussels in seabirds) which, together with this grater, grind the food. These stomach stones are known as gastroliths or grit . In birds that feed on easily digestible or soft foods, the gizzard is poorly developed.

Loss of the stomach in the course of evolution

The stomach first appeared in vertebrates around 450 million years ago . It is assumed that many vertebrates would have lost the stomach and in many cases also the associated genes (e.g. for pepsinogen and the proton potassium pump ) afterwards. a. primeval mammals such as the platypus and the Echidna and about a quarter of all fish species, i. e. S. the real bony fish (Teleostei). The loss of stomach in many lineages could be related to the lack of certain proton pumps as well as pepsinogenic enzymes.

Swallowed food is temporarily stored and chopped up in the process. This homogenization takes place during a residence time of 1–6 hours. When the stomach is stretched in the upper body area by the chyme , peristaltic waves are triggered. The process of emptying the stomach depends on numerous factors. The stomach is emptied reflexively and in portions by relaxing the stomach gate (pylorus). In addition to the autonomic nervous system , it is also controlled by gastrointestinal hormones and peptides (the exact function of which has not yet been clarified) and by the composition of the food (e.g. quantity, temperature). Chemosensors in the small intestine are another mechanism used to control the rate of emptying .

Malformations of the stomach

Diseases of the stomach