Schematic representation of the regulation of gastric acid.

In addition to hydrochloric acid, gastric juice mainly contains mucus , the protein- splitting enzyme pepsin and the intrinsic factor ( mucoprotein , which is necessary for the absorption of vitamin B 12 in the ileum ). It also contains rennet , which supports protein breakdown and digestion (milk protein coagulation). Stomach acid has a pH close to 1 on an empty stomach and 2 - 4 when it is full. It serves to break down food ( hydrolytic breakdown of proteins into oligopeptides or individual amino acids) and has a bactericidal effect.

The stomach acid is made up of protons and chloride ions . The chloride ions are absorbed through food, and gastric acid is produced in the parietal cells of the gastric mucosa, which are sunk in ducts and tubules. Stimuli for increased secretion of chloride ions include stimulation of the parasympathetic nervous system (can also be triggered optically by the so-called Pavlovian reflex ), histamine and gastrin release .

The epithelial cells of the gastric mucosa prevent the gastric juice from breaking down and digesting cell membranes and thus the stomach itself.

A distinction is generally made between three different phases in gastric secretion:

If the stomach acid flows into the esophagus (reflux), this is noticeable as heartburn . Frequent reflux leads to metaplasia of the epithelium of the esophagus, which can promote the development of esophageal cancer .

The pure gastric juice can be used as reflux z. B. can be observed in people with a PEJ probe (percutaneous endoscopic jejunostomy ). 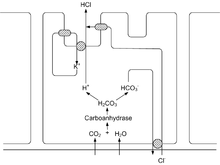 Schematic representation of gastric acid production in the parietal cells.

The hydrochloric acid as stomach acid is composed only extracellularly to protect the stomach epithelium. The parietal cells only secrete chloride ions, which requires a complex and energy-intensive process. In a multi-stage process, oxonium ions are generated and introduced on the one hand , and chloride ions from the blood plasma are exchanged in a second process. In detail the steps are: