The parasympathetic nervous system is one of the three components of the autonomic nervous system . It is involved in the involuntary control of most internal organs and the blood circulation . It is also known as the resting nerve or the recovery nerve, as it is used for metabolism , recovery and the build-up of the body's own reserves ( trophotropic effect).

The vegetative centers of the parasympathetic nervous system are located in the brain stem and in the sacral spinal cord ( pars sacralis , cruciate cord ). Here innervating nerves of the brain stem, the inner eye muscles , the lacrimal and salivary glands and most of the internal organs of the body ( vagus nerve ). In contrast, nerves from the cruciate medulla affect the lower part of the large intestine , the urinary bladder, and the genitals . The transition between the two innervation areas in the large intestine takes place at the Cannon-Böhm point . Due to the anatomical location of the root cells , the parasympathetic system is also known as the craniosacral system (from Latin cranium = skull , os sacrum = sacrum ), in contrast to the thoracolumbar system of the sympathetic nervous system, whose root cells are in the chest (Latin thorax ) and lumbar parts (Latin . Lumbus ) of the spinal cord.

In the ganglia , which are an accumulation of nerve cell bodies , the nerve fibers coming from the central nervous system ( preganglionic nerves , Latin , "in front of the ganglion") are switched to nerve fibers that pull to the respective target organ ( postganglionic nerves , Latin, " after the ganglion "). The ganglia of the parasympathetic nervous system - in contrast to the sympathetic nervous system - are mostly located near or even within their target organs. Switching takes place at switching points of the usual type ( chemical synapses ) by releasing ( exocytosis ) of signal molecules ( neurotransmitters ) from cell A to dock with cell B.

The transmitter substance (neurotransmitter) of the parasympathetic nervous system is both for the switching point in the ganglia and on the target organ acetylcholine (ACh), an ester of acetic acid and the amino alcohol choline .

The synthesis of acetylcholine takes place in the signaling nerve cell (in the presynaptic terminal) by the enzyme choline acetyltransferase . The starting materials are choline and acetyl-CoA .

After being released into the synaptic gap and binding to receptors of the target cell, acetylcholine is broken down by the enzyme acetylcholinesterase into the end products choline and acetic acid (or acetate ) and thus deactivated. 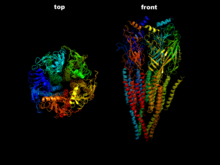 Scheme of a nicotinic ACh receptor

The receptor complexes include channels in the cell membrane that become permeable to cations (positively charged ions such as Na + and Ca 2+ ) after the receptor has been activated . That is why they belong to the group of ionotropic receptors .

If signal molecules bind to a receptor, an ion channel opens and thus generates an influx of Na + and Ca 2+ (see diffusion ). This causes a local change in the transmembrane electrical voltage ( excitatory postsynaptic potential ), i.e. it depolarizes the membrane. If this depolarization is strong enough, an action potential is triggered and the target cell is excited.

The N M -receptors are inhibited by tubocurarine , the N N -receptors by hexamethonium .

The muscarinic receptors are divided into the subtypes M 1 to M 5 . M 1 occurs in vegetative ganglia, M 2 in the heart and M 3 in smooth muscles , especially in the digestive tract. The functions of M 4 and M 5 are not yet fully known, but they do occur in the brain.

In the M 1 , M 3 and M 5 receptors, the binding of acetylcholine triggers the activation of the phospholipase C β (PLC β ) by a G q protein. The phospholipase split phosphatidylinositol-4,5-bisphosphate (PIP 2 , a phospholipid ) into inositol trisphosphate (IP 3 ) and diacylglycerol (DAG). While DAG remains in the cell membrane, IP 3 causes calcium to be released from the endoplasmic reticulum (ER). This triggers either a delayed electrical signal ( EPSP ) or a contraction of smooth muscles in the case of the M 3 receptors.

M 2 and M 4 receptors, on the other hand, activate a G i protein ( i for inhibitory, inhibitory). This opens certain K + channels ( IK ACh ) in the sinus and AV nodes of the heart . This has a negative chronotropic (pulse-lowering) and dromotropic (increase in the time required for stimulus transmission) effect. In addition, the enzyme adenylyl cyclase is inhibited, with the effect of reducing the intracellular cAMP concentration. This decrease lowers the influx of calcium, which results in a reduction in the heart's ability to contract (negative inotropic effect).

Muscarinic receptors are inhibited by atropine , a poison that is also found in deadly nightshade.

The preganglionic fibers of the parasympathetic part of the oculomotor nerve (eye mover nerve ) arise from the accessory nucleus nervi oculomotorii (additional nucleus of the eye mover nerve , Edinger-Westphal nucleus ) and run to the ciliary ganglion . There they switch to neurons of the Nervi ciliares breves . These run to the sphincter pupillae muscle ("pupil constriction"), where they cause a constriction ( miosis ) of the pupils, and to the ciliary muscle , which influences the refractive power of the eye lens ( accommodation ).

The parasympathetic part of the facial nerve (facial nerve) arises in the nucleus salivatorius superior (upper salivary core), in the medulla oblongata (afterbrain). Part of these fibers, the major petrosal nerve (great tympanic nerve), runs to the pterygopalatine ganglion (alar palatal ganglion ), where it is switched to neurons whose fibers run in the lacrimal nerve to the lacrimal gland , which are thereby stimulated to produce tears.

Another part of the facial nerve, the chorda tympani (drum string), runs to the submandibular ganglion , where it is switched to neurons that supply the salivary glands on the lower jaw , the submandibular gland and the sublingual gland . There you solve a vasodilatation of the supplying arteries and increased protein production and make the saliva so watery.

The preganglionic parasympathetic fibers of the glossopharyngeal nerve (from the Greek glossa = tongue, pharynx = throat) arise from the inferior salivary nucleus (lower salivary core) in the medulla oblongata. Its fibers run partly in the petrosus minor nerve (small tympanic nerve) to the otic ganglion (ear ganglion), where they are switched to neurons that run in the auriculotemporal nerve ("ear-temple nerve") to the parotid gland (parotid gland) and this to the Stimulate saliva secretion .

The preganglionic parasympathetic fibers of the vagus nerve (from Latin vagari - "to wander around") arise from the nucleus dorsalis nervi vagi (back core of the vagus nerve) in the medulla oblongata. The vagus nerve leaves the skull through the jugular foramen and then runs together with the common carotid artery and the internal jugular vein (internal jugular vein ) in the neck towards the body. There it innervates the heart , the bronchi , the digestive tract and the ureter .

The cross part of the parasympathetic arises from the intermediolateral nucleus (outer intermediate nucleus ) and the intermediomedial nucleus (inner intermediate nucleus ) in the spinal cord segments S2 to S4. They run in the pudendal nerve (pudendal nerve) and go from this as Nervi pelvic (pelvic nerve) in the inferior hypogastric plexus (lower lower stomach braid) a. Switching to other neurons takes place either here or in small ganglia of the innervated organs.

Target organs are the large intestine below the Cannon-Boehm point , the urinary bladder and the genitals .

The parasympathetic nervous system has a stimulating effect on the large intestine, just as it does on the rest of the digestive tract. The glands are stimulated to secrete, the tone of the smooth muscles is increased and the sphincter muscles are relaxed.

In addition, the parasympathetic nervous system is involved in a reflex when defecating ( defecation ). If free nerve endings in the rectum are stimulated by stretching, signals are sent to the cross segments of the spinal cord. These trigger the transmission of signals to the descending colon (descending colon), sigmoid colon and rectum . These run in parasympathetic fibers of the pelvic nerve , increase the number and strength of the peristaltic waves of the smooth muscles in the intestinal wall and relax the internal sphincter muscle of the anus . In contrast to the internal sphincter, which consists of smooth muscles, the external sphincter is a skeletal muscle and is therefore under voluntary control.

The urination ( micturition ) is subject to the vegetative (autonomous) control by the parasympathetic nervous system. It activates the smooth muscles in the wall of the urinary bladder ( Musculus detrusor ) and thus compresses the entire bladder.

In addition, the internal sphincter (will sphincter ) of the bladder relaxed by the parasympathetic nervous system.

In the genitals, the parasympathetic nervous system causes blood vessels to widen ( vasodilation ), one of the necessary prerequisites for an erection .

Effect of the vagus nerve on the internal organs

The parasympathetic innervation of the internal organs occurs through the vagus nerve . The organs affected are the heart, bronchi , stomach , intestines (except for the lower large intestine, which is innervated by the sacrum), gallbladder , liver , pancreas and ureters .

In the heart, the parasympathetic nervous system slows the pulse ( negative chronotropy ) and the excitability ( negative bathmotropy ). It also slows down the conduction of excitation from the sinus node to the AV node and in the AV node itself ( negative dromotropia ).

The supply areas of the right and left vagus nerves overlap in the heart, with the right one predominantly innervating the sinus node and influencing the pulse rate there, while the left one mainly the AV node and thus the conduction.

The cholinergic receptors in the heart are of type M 2 . They activate a G i protein ( i for inhibitory, inhibitory). In the sinus and AV nodes it opens certain K + channels ( IK ACh ). The resulting potassium outflow hyperpolarizes the cell , that is, its membrane potential becomes more negative. This makes it difficult to trigger an action potential that leads to muscle contraction.

In the heart muscle cells, the slow sodium channels , so-called "funny channels" (cAMP-dependent), are partially inactivated and so the spontaneous depolarization of the pacemaker cells is delayed (frequency decrease , negative chronotropic ).

In the bronchi , the parasympathetic nervous system triggers bronchoconstriction (constriction of the bronchi) and increased secretion of mucus by stimulating the M 3 receptors.

In the smooth muscles of the bronchi, the calcium influx triggered by IP3 triggers a contraction, which leads to the narrowing of the bronchi.

The latter generally promotes digestion by increasing the promotional activity ( peristalsis ) and release ( secretion ) of digestive enzymes . In the stomach and intestines, the tone (state of tension) of the smooth muscles is increased and the sphincter muscles ( sphincters ) are relaxed by nitric oxide (NO).

The increase in tone and secretion of the glands is based on the same mechanisms as in the lungs.

In the liver, the parasympathetic nervous system stimulates glycogen formation .

In the gallbladder , it triggers the release of bile through the contraction of the smooth muscles in the organ wall .

The exocrine secretions ( secretion ) of the pancreas are stimulated by the increase in blood flow. This causes the secretion of the protein-splitting digestive enzymes ( trypsin , chymotrypsin , elastase , carboxylpeptidase ).

The smooth muscles in the ureter are contracted by the innervation of the vagus nerve.

Parasympatholytic substances ( anticholinergics ) such as atropine act by competitive inhibition of acetylcholine. When used, the influence of the sympathetic then predominates due to the inhibition of the parasympathetic nervous system.

Areas of application are e.g. B. Dilation of the pupils ( mydriasis ) for therapeutic measures, the therapy of spasms of the gastrointestinal tract, the urinary tract and the muscles of the respiratory tract ( bronchospasm ). Acute bradycardias , i.e. H. the sharp drop in heart rate can be treated with parasympatholytic drugs.

There are direct and indirect acting parasympathomimetics . The former (like pilocarpine ) have a similar effect to acetylcholine. The indirect parasympathomimetics such as physostigmine are reversible or irreversible cholinesterase inhibitors , which inhibit the breakdown of acetylcholine by cholinesterase and thus cause a longer transmitter effect.

Areas of application of the parasympathomimetics include z. B. the therapy of glaucoma .