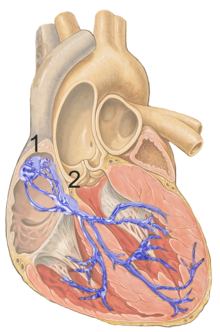 Diagram of the heart with the excitation conduction system in blue: (1) sinus node, (2) AV node

The sinus node ( nodus sinuatrialis ), also sinuatrial node ( SA node ) or Keith Flack node (also called Keith Flack sinus node ), is the primary electrical clock of the heart's action . It consists of special muscle cells and is located in the right atrium ( atrium dextrum ) of the heart in the area of ​​the mouth of the superior vena cava , the so-called sinus venarum cavarum . “Sinus” or “Sinuatrial” are derived from the position of this clock generator. It is part of the heart's arousal system . The sinus rhythm is created by the sinus node .

The term lump is actually a bit misleading, as it is not really a palpable or visible lump (in the sense of a lymph node or tumor ). The sinus node can be located electrically as the area of ​​the heart where the electrical excitation can first be detected. Also, a histological distinction between neighboring cells is possible.

In the human heart, the sinus node is spindle-shaped close to the epicardium at the confluence of the superior vena cava and the right atrium. There is a considerable deviation in position and size (length 10–20 mm, width 2–3 mm). The blood supply occurs through a single strong coronary artery branch in the area of ​​the atrium, which in the majority of normal hearts arises proximally from the right coronary artery. In addition, there is a collateral supply with other vascular branches of the atrial vascular supply. The transatrial anastomotic circulation can act as a bridge between the two main coronary trunks (right coronary artery, left circumflex branch). The venous drainage occurs directly into the right atrium through Thebesian canals.

Histologically , the sinus node consists of a group of specialized cardiac muscle cells that are capable of spontaneous depolarization and can thus electrically excite themselves. This happens in the resting state in the adult with a frequency of 60-80 / min. In the case of extremely well-trained endurance athletes, however, due to the enlarged heart , resting pulse rates of less than 40 / min can also be found. Compared with cells of the working myocardium , they have fewer myofibrils and mitochondria , so they are less prone to hypoxia .

The excitation that arises spontaneously in the sinus node reaches the following components of the cardiac excitation conduction system ( AV node , bundle of His , Tawara thighs , Purkinje fibers ) via the working muscles of the atria - according to some authors via so-called internodal bundles . These other parts of the excitation conduction system are also capable of spontaneous depolarization, which, however, does not come into play due to an ever lower frequency in the normal state, so that the sinus node is the only clock generator.

HCN canal in the sinus node with typical action potential

What is striking about the action potential of the sinus node is the immediate depolarization after repolarization. This is due to HCN channels ( H yperpolarisation activated c yclic n , which open ucleotide gates) by hyperpolarization. The resulting sodium inward current is also called I-funny.

Various functional disorders of the sinus node manifest themselves as complicated bradycardiac and tachycardiac arrhythmias in the sick sinus syndrome .

A complete failure of the sinus node is called sinus arrest . If no subordinate excitation area steps in, an acute cardiac arrest occurs. This is rare because subordinate centers in the healthy heart ensure a heart rate that is too slow, but sufficient at rest. If sinus arrest does not lead to sudden death, it can now be remedied relatively easily and permanently with a pacemaker .

The investigations by Arthur Keith and Martin Flack, among others, on the sinus node followed only a short time later on Sunao Tawara's detailed publication on the AV node (1906). Tawara had described branching muscle strands that ran from the auricles on both sides of the interventricular septum , and suggested that this must be a system of impulse conduction and distribution. Tawara used it to describe a knot structure that Keith and Flack originally wanted to investigate as well. However, they found a similar nodal structure in a different anatomical location and suspected it to be the overriding pacemaker center of cardiac movement. Keith himself called the structure he found from a morphological point of view Sino-auricular knot (1907). W. Koch (1907, 1909) coined the synonym sinus node . The experimental-physiological confirmation of the sinus node function was provided by Thomas Lewis and Wybau in 1910 with the EKG technique independently of one another.

"I. (a) The muscular connection in the lower order hearts between the sinus and auricular canals, and in the higher order hearts between the parts of the heart that represent them is close. In the latter, fibers lead directly from this connection to the vicinity of the AV bundle. (b) The auricular canal connection is highlighted at this point by a thickening of the heart wall. […] II (a) There is a remarkable relic of persistent primitive fibers at the sino-auricular junction in all examined mammalian hearts. These fibers are closely connected with the vagus and sympathetic nerves, they have a special arterial supply; it is assumed that this is where the rhythm that determines the movement of the heart normally arises. "