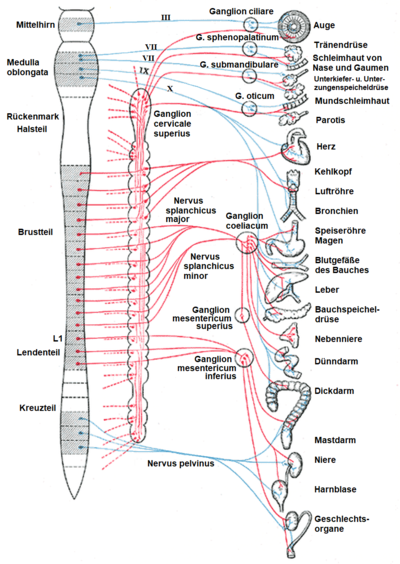 In the paravertebral ganglia, most of the sympathetic fibers are switched to a second neuron. The neurotransmitter is (as with the parasympathetic nervous system) acetylcholine . The second (postganglionic) neuron transmits its impulses to the target organ using norepinephrine . Exceptions are the transmission of impulses to the sweat glands and the adrenal medulla. This is also done by acetylcholine.

The term was first used by the Danish (but active in Paris) anatomist Jacob Winslow ( Winsløw , 1669-1760) in connection with nervous activity and used in his textbook Exposition anatomique de la structure du corps humain . It is derived from the ancient Greek words συμπαθεῖν sympatheín "pity" and συμπάθεια sympátheia "sympathy" and was used in this way by the ancient Greek doctor Hippocrates (around 460-370 BC). The ancient Greek doctor Galenos (around 129-216 AD) assumed a kind of empathy between different parts of the body. See also the concept of sympathy in medical history .

The largest sympathetic paraganglion is the adrenal medulla . Here the second neuron is a neuroendocrine cell that delivers its transmitter to the blood, i.e. releases it as a hormone .

The main target tissues of the sympathetic system are the smooth muscles of the blood vessels and glands . Like the other parts of the autonomic nervous system, the sympathetic controls vital processes. This regulation takes place largely without conscious awareness and can hardly be influenced at will.

Overall, the sympathetic system increases the performance of the organism (ergotropy). It puts the body in high motivation, prepares it for attack or flight or other extraordinary efforts (→ stress reaction ).

To do this, it inhibits other processes that are not absolutely necessary for the immediate activity, such as B. bowel activity . In the skin, intestines and especially the kidneys, it reduces blood flow by constricting the vessels there .

It also has an impact on: