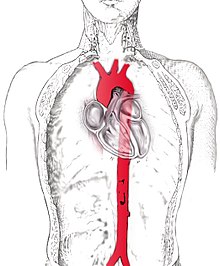 The aorta ( ancient Greek ἀορτή aortē , from ἀείρω aeirō , German 'I lift up to carry' ), also the main artery or large body artery , is a large blood vessel that arises from the left side of the heart . It directs the blood from the left heart chamber (left ventricle ) into the vessels of the great blood circulation .

The aorta is the largest artery ( artery ) of the body. In adult humans, it is usually about 2.5-3.5 cm in diameter and 30-40 cm in length. It has the shape of an upright walking stick with an arched beginning and a straight course down to the pelvic area.

Hippocrates (460 - around 370 BC) understood the aorta to be the trachea with the two main bronchi to which the lungs “hang”. Aristotle (384–322 BC) then transferred the name to the large body artery.

In anatomy , surgery and imaging procedures, a distinction is made between the following aortic sections for better orientation: 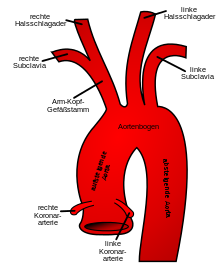 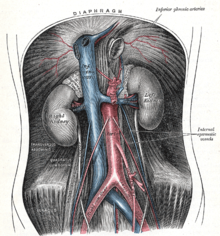 The aorta in the abdomen with branches (red)

Thanks to the elasticity of its vascular wall, the aorta functions as an air chamber , which by mainly giving way radially when the pressure rises, turns the blood stream arriving from the heart in discrete bursts into a more evenly flowing stream by increasing its volume in a rhythmic manner. The pressure of the blood is constantly measured by pressure sensors (so-called baroreceptors ). 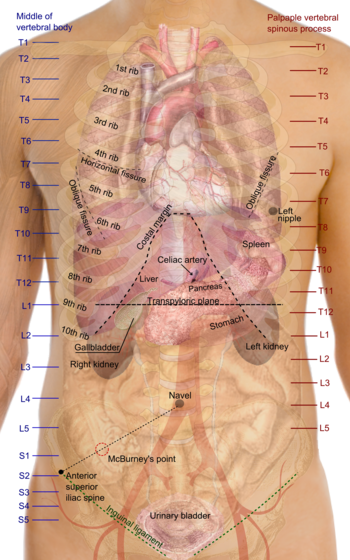 Projection of the large abdominal or abdominal vessels onto the various organs. View from ventral

Diseases of the aorta

A distinction is made between the following types of abdominal aortic stenosis: