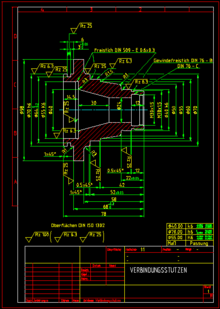 AutoCAD [ ɑːtoʊˈkæd ] is part of the Autodesk CAD product range .

AutoCAD was developed as a graphic drawing editor by AutoDesk. In the early years up to around 1990, AutoCAD was mainly used as a simple CAD program with programming interfaces for creating technical drawings . Today the product range includes an extensive 3D function for modeling objects as well as special extensions, especially for engineers , mechanical engineers , architects , interior designers and design specialists, as well as geo-informatics , building technicians and general civil engineers.

AutoCAD is basically a vector-oriented drawing program that is built on simple objects such as lines, polylines, circles, arcs and texts, which in turn form the basis for more complex 3D objects.

The file formats developed for AutoCAD. dwg and. dxf are an industry standard for the exchange of CAD data. According to Autodesk, around three billion files have been created since the DWG format was invented, of which one billion were actively processed in 2006.

AutoCAD ran on PC-compatible DOS , such as PC DOS and MS-DOS , and was also ported to Unix and the Macintosh . From Release 14, only Windows was supported as the operating system in the 1990s . Since October 15, 2010, AutoCAD has also been available for macOS (from version 10.5.8 " Leopard ").

The ARX (AutoCad Runtime Extension) version is indicated by the internal version variable ACADVER. ARX ​​applications can only be executed in a compatible manner within the integer version portion (e.g. 17).

AutoCAD is offered in different versions with different functions.

AutoCAD is software for processing technical drawings as vector graphics in 2D and 3D. The software is programmed , among other things, in C ++ and has several programming interfaces such as AutoLISP . AutoCAD is often used with additional software that is used with predefined symbols , macros and calculation functions for the rapid creation of technical drawings. In the course of further development, these functions were integrated directly into the AutoCAD-based products.

AutoCAD LT is a simplified version of AutoCAD, which is mostly used to create 2D drawings and which has fewer programming interfaces. Here, too, there is additional software which, through the given symbols, macros and software with calculation functions, is used to quickly create technical drawings. Due to its lower functionality, AutoCAD LT is more cost-effective than the 3D version of AutoCAD.

AutoCAD Mechanical is an extension of AutoCAD for the mechanical engineering sector ( CAD / CAM ), which arose from the former German software house GENIUS CAD software GmbH in Amberg, Bavaria, through takeover by Autodesk . It is a very powerful 2D application with a significantly expanded range of commands, standard parts, calculation and parts list functions.

The previously sold extension Mechanical Desktop for mechanical 3D design is no longer being developed. Instead, there is the much more powerful and modern parametric 3D program for design in mechanics and mechanical engineering Autodesk Inventor . AutoCAD , AutoCAD Mechanical and Autodesk Inventor are marketed with additional products as a package called the “Product Design Suite”. "Product Design Suite Ultimate" is an extension with "Inventor Professional", which extends the functionality to include FEM calculation , dynamic simulation , pipeline and cable harness construction . The management of the design data can be done with Autodesk Vault .

AutoCAD ReCap is an AutoCAD extension that, in addition to the 3D models , enables the processing of point clouds , such as those provided by laser scanners , in AutoCAD.

AutoCAD Map 3D is based on AutoCAD and complements it with extensive functions for cartography . The program is used to create and edit technical maps. Data from numerous sources can be integrated through various interfaces and, to a certain extent, geodata analyzes can also be carried out. In the current version, the 3D functions have been expanded, including the generation of contour plans.

In 1998 the Topobase software was published by the Swiss company C-Plan AG in Gümligen as an AutoCAD extension. In 2006 the company was taken over by Autodesk . The extension turned AutoCAD Map 3D into a geographic information system and is based on an Oracle database with a spatial extension, which is based on the standards of the Open Geospatial Consortium . From version 2012 it is integrated in Map 3D and can be used for all industry models .

Also TB Web GIS was developed by the company Plan C- developed alongside the Topobase. After the takeover by Autodesk, the software was offered as Autodesk Topobase Web .

AutoCAD ecscad is based on AutoCAD and is suitable for planning electrotechnical control systems, so-called circuit diagrams .

Autosketch is a simple vector drawing program . It is no longer supported or developed by Autodesk. It was replaced by the Autodesk SketchBook program , which is also available free of charge as an express version with limited functionality for Windows, MacOS, IOS and Android.

as well as further interfaces to:

By using standard drawings, blocks, symbols, line types and external special programs, for example for the output of calculation results, almost all geometric and technical representations can be created or modified relatively easily.

Externally , this file format is identified by the file name extension .dwg for 'normal' drawing files . The abbreviation stands for d ra w in g (engl. For "drawing"). The documentation of the file structure is not freely available, but documentation of the Open Design Alliance can be found on the Internet.

The DWG file format has been continuously adapted and expanded to meet the requirements of the respective AutoCAD versions. The format was changed with the introduction of the AutoCAD 2000, 2004, 2007, 2010, 2013 and 2018 versions. The formats designated as DWG 2000 , DWG 2004 , DWG 2007 , DWG 2010 , DWG 2013 and DWG 2018 cannot be read into older AutoCAD versions. The limited compatibility of the DWG file format with older AutoCAD versions can be partially circumvented by saving in older format versions (can generally be specified in the program) as well as by using the DXF file format and using external converter programs. When using the DXF format, the disintegration of unsupported objects into simpler basic objects is to be expected. The first 6 bytes of a dwg file can be read with a normal text editor. You specify the version of the DWG file. Current files from version AutoCAD 2013 to AutoCAD 2015 begin with the header AC1027.

The DXF interface is an open source interface from the manufacturer Autodesk and is not subject to a neutral standardization committee, but the documentation for DXF is freely available. It is an image of the binary DWG that can be read in ASCII characters . AutoCAD supports DXF ( drawing interchange format ) for data exchange with other CAD programs in the current version and mostly 3–4 older versions.

The DXF file format directly supports 2D and 3D coordinates, as well as lines, arcs and simple surfaces and other complex geometric elements such as blocks, ARX objects and dimensions. With simple means, for example with text editors and almost all programming languages , including the VBA of Excel, it is possible to generate, evaluate or manipulate DXF files. These possibilities are particularly suitable for geometric and geometry-based calculations of CAD models, for example for optimizing surfaces. The structure is very clear, simple and structured.

This interface has established itself in the CAD market as a quasi data exchange standard, although it was not developed by Autodesk with this aim. The DXF format was created by Autodesk to transfer geometric information from AutoCAD to an internal or external application for further use. In the same way, the result of a calculation, for example, should be transferred back to AutoCAD from the application. For this purpose, a list of geometric objects was created by the developers and carefully documented. This open documentation was then adopted by other CAD, CNC and CAM manufacturers as a CAD interface because of its simple structure and overview. It is often the lowest common denominator in many vector graphics programs and is supported by almost all of them. However, not all functions are usually fully supported by the other manufacturers and therefore sometimes crucial details are lost when exchanging via DXF.

Like the DWG file format, the DXF file format has also been continuously adapted and expanded to meet the requirements of the respective AutoCAD versions.

The DXB file format ( d rawing e x change format, b inary ) is a binary form of the DXF file format. It is extremely compact, can be read and written quickly compared to DXF, but is much more complex for the programmer than the ASCII variant. DXB is only used in a few, mainly time-critical applications.

Another format is the DWF ( design web format ) file format as a highly compressed vector format for presentation on the Internet and for viewing. The format is documented. A DWF Toolkit with C ++ - API for reading and writing, with source code available free of charge at Autodesk. DWFx is a further development of DWF, which is based on Microsoft's XPS format .

Another format is the DGN file format , which is defined by MicroStation and is also supported in the current AutoCAD versions. The abbreviation DGN stands for design (English for "draft").

Another format is the SHP file format (Shapefile; not to be confused with the ESRI Shapefile ), a symbol definition. This file format is used to encode drawing elements at the lowest level and is compiled to SHX before use . Areas of application are user-defined hatching, lines, dimensions or fonts. Only the most elementary objects can be defined, such as lines and arcs.

The file extension for AutoCad fonts ( fonts ) and line types. However, a font shx file is encoded in binary format, and a linetype shx file is encoded in plain text. Fonts in shx format are e.g. T. graphically treated differently than z. B. Fonts that are made available by the operating system ( TrueType , Postscript fonts ), as they do not support filling areas or curves.

There are special applications for many areas for AutoCAD . For example, for construction , mechanical engineering (see above), landscaping, utility and electrical engineering. These are usually written in C ++ . With ObjectARX (C ++ API), Autodesk offers the relevant basics. The development is also going to .NET here . Simple program tools have sometimes been written in Visual Basic or VBA . There are also a number of AutoLISP routines that are often exchanged in free forums. A listing of commercial applications can be found in the Autodesk catalog.

AutoCAD courses put to the test

In February 2015, Stiftung Warentest tested AutoCAD courses for beginners. Seven courses were tested, four of which were certified as being of good quality. The providers included chambers of crafts , chambers of industry and commerce and commercial training providers. The costs for the three- to five-day courses varied between 143 and 2090 euros, with both the cheapest and the most expensive course performing only mediocre.