This article deals with the situation in Germany, for Austria see Austrian Chamber of Commerce .

100 years of Chambers of Crafts in Germany: Postage stamp from 2000

A Chamber of Crafts is a self-governing body of the entire craft in a chamber district organized in the legal form of a corporation under public law . It is the task of the chambers of crafts to represent the interests of the entire crafts and to regulate the interests of the crafts themselves in the course of self-administration. The Chamber exercises the legal supervision of the guilds and the District Trade machinations of the chamber district. The Chamber of Crafts includes the owners of a craft business (differentiated between: trades requiring a license and trades that are not subject to approval) and the craft-like trades (to which approx. 60 different professions belong) as well as journeymen, employees with completed vocational training and apprentices . 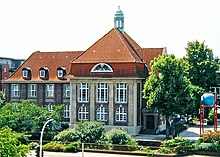 Building of the former Chamber of Crafts Harburg (Elbe) 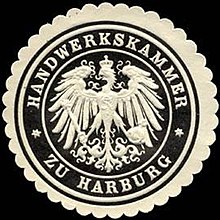 Seal of the Chamber of Crafts Harburg

The founding of the Chamber of Crafts in Germany goes back to the Craftsmen Act of 1897 . The Reich Law created the conditions for the formation of the chambers. From April 1900 a total of 71 chambers of crafts were founded throughout the German Empire.

The history of the establishment of the chambers of crafts goes back at least to the 19th century. Many believe that the chambers of handicrafts are the weakened version of the medieval guild system . Guilds run their members' lives from cradle to grave. For centuries they were the basis of economic life. The guild regulations formed a regionally different system of market foreclosure that was interwoven with the political order, paired with a social security system for the skilled trades that was missing at the time. An economically successful exercise of manual work was practically impossible in the cities without membership of a guild. The effects of this time can be found today in many special aspects of German culture ( masters , guilds, waltzes , freemasonry ) and everyday language: traditional, class thinking. 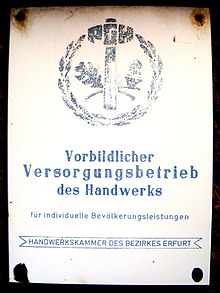 Roll of honor at an excellent PGH from Buttstädt

With the social, economic and technical changes that began in the 19th century, freedom of trade gradually spread . In the time of National Socialism , class thinking was strengthened again through Aryanization and the introduction of the large certificate of proficiency ( master craftsman's certificate ). The chambers of handicrafts, whose self-administration was eliminated immediately after the seizure of power , were combined with the chambers of industry and commerce to form district economic chambers from 1942 , within which they played no significant role due to the warlike importance of industry . This handicraft department within the Gauwirtschaftskammer was headed by the Gauhandwerkmeister , who was also the vice-president of the Gauwirtschaftskammer.

After the Second World War , the Gau economic chambers were dissolved. The previous chambers of crafts were re-established in the western sectors.

In the Soviet Zone emerged as SMAD 161 1946 command no. From May 27 national chambers of trade at the level of countries . These had branches at the district level. The district offices of the former Reich guild associations, the district craftsmen's associations and the guilds were incorporated into the chambers. In August 1950, the People's Chamber of the German Democratic Republic passed the law for the promotion of the craft, which was now the legal basis of the state chambers of crafts of the states. After the abolition of the countries in the GDR 1952, the Regulation of 20 August 1953 on 30 September 1953 arose due to chambers of trade at the level of districts . These chambers, like the chambers of handicrafts in the time of National Socialism, did not represent organs of self-administration of the economy. They were the council of the district and served as legal advisors and political promoters of both the private handicrafts and the master craftsmen who were part of a " production cooperative des Handwerks ”(PGH). In particular, they no longer had any tasks in vocational training. After the fall of the Wall , chambers of crafts were created based on the Western model.

According to the Crafts Code (HwO), the chambers of crafts have the following tasks:

In addition, the chambers of crafts support their members with legal advice as well as business advice .

A number of entrepreneurs are rejecting compulsory membership. The Federal Association for Free Chambers e. V. The association defines itself through the rejection of the public-law chamber structures and takes up the uneasiness of having to involuntarily belong to a chamber. His representatives criticize the chambers' overspending of tasks as well as the waste of membership fees and the like. a. in boarding houses and oversized buildings. The criticism also turns against the results of the opinion-forming in the chambers.

There is an increasing lack of social commitment in the chambers of crafts. With voter turnouts of regularly well below 20%, the elections for the general assembly are carried out as " peace elections" in many chamber of crafts districts . Candidates are set up who are considered elected without an actual election because their number is just as large or even lower than the number of mandates to be awarded.

The extent to which the support and promotion of member companies can be felt in a positive way for the individual company is repeatedly questioned. This is also due to the fact that numerous companies have no interest or show that they take advantage of the offers contained in the membership fee of the chambers.

From the tightening of the imperial handicrafts order in the time of National Socialism, it is concluded that this is an expression of the typical state German will to regulate as an expression of a lack of confidence in the self-regulating forces of the labor and market systems.

For example, the fact that a large number of professions (e.g. doctors, pharmacists, lawyers, etc.) are organized in chambers may speak against this view. To what extent this arises from the protection of interest groups, however, urgently needs to be checked. The chambers are originally an expression of the will of these professional groups to want to organize themselves. If the chambers were to be abolished, the regulatory tasks of the chambers, such as accompanying training, would be carried out directly by the state.

The skilled trades (especially the employees, one third of whom sit on the chambers' committees) would have lost an important influence. However, it cannot be denied that if the previous regulations are retained, the German craft trades are likely to be at a disadvantage in the harmonization efforts within the European Union.

Proponents of the master craftsman qualification argue that this should not only secure the level of knowledge in the respective professions (although there is no obligation for further training). At the same time, it is intended to prepare those affected for independence, which is associated with considerable risks, including personal insolvency. Ultimately, it should also protect the customer, who, due to a lack of specialist knowledge in many craft areas, can only assess to a limited extent whether the work performed corresponds to the respective standard. The validity of these objections is controversial, not least because of the recurring mistakes of the building trade. Nevertheless, it should not be overlooked that the master craftsman qualification, which requires a corresponding apprenticeship training, is imparted knowledge that has already been lost in other countries. In this context the baker's trade and the butcher's trade are only mentioned as examples. In 2019 the number of trades for which the successfully completed master craftsman's examination is a prerequisite was increased again, from 41 to 53 professions.

The following list names all 53 chambers of crafts by their official name, sorted by federal state.

Former chambers of crafts in Germany

In Poland , chambers of crafts exist under the name of Izba Rzemiosła i Przedsiębiorczości as legal entities that are financed through membership fees. Membership is voluntary. The main tasks of the chambers include the representation and advocacy of their members, advisory services and the implementation of master craftsman and skilled worker examinations.