The Elbe-Elster district is a district in the south of the state of Brandenburg . It marks the Elbe-Elster-Land and part of the Niederlausitz . The northern parts of the district, in particular the town of Schönewalde , still have shares in the Fläming .

The district can be divided geographically into three parts:

The Elbe-Elster-Land is relatively sharply demarcated from the rest of the district as a distinct lowland by the two rivers that give it its name, with all their rivers and tributaries. The western part of Niederlausitz begins southeast of Schlieben with the districts Doberlug-Kirchhain and Finsterwalde . The places north of the Schweinitzer Fließ are still counted directly to the Fläming , while the more southern parts extend further into the country and shape the villages in terms of cultural history. In particular, the areas of the city of Schönewalde and the northern communities in the office of Schlieben are mentioned .

→ See also: List of places in the Elbe-Elster district

After the municipal reform in 2003 , the district still comprises 33 municipalities, including eleven cities. In brackets the population on December 31, 2019 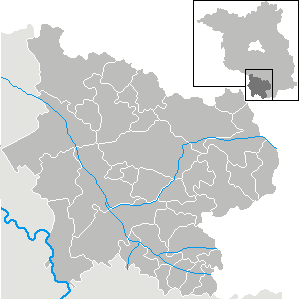 Offices and associated municipalities
(seat of the official administration *)

→ See also: History of the Elbe-Elster-Land

The district of Elbe-Elster was created on December 6, 1993 in the course of the district reform in Brandenburg from the former (state) districts of Finsterwalde , Bad Liebenwerda and Herzberg , without the community of Schöna-Kolpien of the Dahme / Mark office .

On May 25, 2009, the district received the title “ Place of Diversity ” awarded by the federal government .

Today's district was subject to an eventful history and today unites different cultural and linguistic areas. Above all, there is a cultural and historical contrast between the areas of West Lower Lusatia around Finsterwalde and Doberlug-Kirchhain and the former Electoral Saxon , later Prussian ( Province of Saxony ), but never before Brandenburg territories in the north, west and south of the district.

Since the election on May 26, 2019, the 50 seats in the district council have been distributed among parties and groups of voters as follows:

Heinrich-Jaschinski lost to his competitor Iris Schülzke (independent) in the district election on January 24, 2010, who received 51.4% of the valid votes. However, due to the low turnout of 25.1%, she missed the required quorum of 15% of the eligible voters. As a result, the district council had to decide. He elected Heinrich-Jaschinski on March 29, 2010 in accordance with § 72 (3) of the Brandenburg Local Election Act for eight years as district administrator.

In the district election on April 22, 2018, Heinrich-Jaschinski was confirmed in his office for another eight years with 52.1% of the valid votes.

On April 24, 1995, the Elbe-Elster district was granted the right to use a coat of arms.

Blazon : “In the quartered shield at the top nine times divided by gold and black, behind in silver a gold-armored red bull looking back; below in front in gold a red-armored and red-tongued, erect black lion, in the back divided nine times by red and silver. "

The gold-armored retro-looking red bull is the Lower Lusatian bull (also Luckauer bull). With the red-armored and red-tongued, erect black lion around the Meissnian lion. Both go in the same direction together, vigilant on all sides. The black and gold stripes go back to the Duchy of Saxony-Wittenberg in the late 12th century. The red and silver stripes stand for the Brandenburg coat of arms, since in 1815 the Saxon offices of Doberlug and Finsterwalde , as well as the state rule Sonnewalde , which was under Saxon feudal sovereignty, in 1815 the province of Brandenburg in the Luckau district of Niederlausitz, which they owned until the 15th century already belonged, were assigned.

“The district wields a flag divided by black and gold. The colors of the flag are derived from the Saxon coat of arms. The flag is vertically divided both vertically and horizontally and bears the coat of arms in such a way that the split line of the shield comes to lie on the color separation line. "
(Section 2 (3) of the main statutes)

The following traffic routes run through the Elbe-Elster district:

Grave field next to the former Mühlberg camp

There are 26 designated nature reserves in the district (as of February 2017).

See also : List of nature reserves in the Elbe-Elster district

See the list of natural monuments in the Elbe-Elster district

On January 1, 1994, the district was assigned the distinctive sign EE and has been issued since then. The distinctive symbol FI (Finsterwalde) has been available since April 2, 2013, and LIB (Bad Liebenwerda) since May 29, 2013 . The HZ (Herzberg) license plate , which has since been assigned to the Harz district, is not available.

The table shows the incorporations and mergers of municipalities since the district was formed on December 5, 1993

In the Elbe-Elster district, the Brandenburg dialects meet the Upper Saxon dialects from the neighboring federal states. In the villages of the northern district area, one occasionally still encounters Flemish Platt, a Low German dialect , while in the south a pronounced Upper Saxon already predominates.

The special situation can lead to confusion about the origin of the speaker, especially in the rest of Brandenburg .

Portal: Elbe-Elster  - Overview of Wikipedia content on the subject of Elbe-Elster