Dobra is a district of the city of Bad Liebenwerda in the Elbe-Elster district in Brandenburg and is located three kilometers east of the city in the Niederlausitzer Heidelandschaft nature park .

Dobra belonged to the Bad Liebenwerda district until it was incorporated in 1992 and currently has 353 inhabitants. 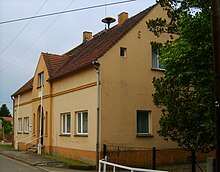 Dobra owes its name to the Sorbian dobra voda, which means "good water" and may have been derived from the original stream name.

The traces of human settlement go back to prehistoric times. An approximately 3000 year old burial ground with barrows indicates a Bronze Age settlement. The first written mention of the place comes from the year 1422.

The Dobra church was probably built in 1483 and the village's mills are mentioned as early as 1505, which were driven by a spring that is still today a water dispenser for the Maasdorf ponds. It is believed to be the same water that sinks into the meadows at the Kraupa forestry and reappears on the Dobraer Flur.

In 1529, on the occasion of the first church visitation, the place was ecclesiastically separated from Wahrenbrück and connected to the parish of Liebenwerda. By the former importance of the place and the own testament Dingstuhl the Office Liebenwerda , which was mentioned in 1550 and, even Liebenwerda (except the castle district), next to Dobra Maasdorf , Zobersdorf and Zeischa belonged.

With the construction of the first houses in 1800 on the nearby Sandberg, the place Neudobra was formed, which is now also called vineyards . During the Wars of Liberation , the area between Heidchensberg and Zeischa was besieged by Prussian troops in the spring of 1813 and the Tauentziensche Corps was partially encamped in Dobra.

In 1897 the old school in the village was demolished and a new one built. In 1904 the place had 400 inhabitants, while in 1934 Dobra and Neudobra already had 1040 inhabitants. In 1936, the Dobra district Neudobra was reclassified to Bad Liebenwerda.

On December 6, 1993 Dobra was incorporated into the city of Bad Liebenwerda.

The small late Gothic village church with a carved altar from around 1520, the church square and the former hunting lodge of Friedrich August II. , Who later became the forester's house from the 18th century, are worth seeing . The mills are still partially preserved today. Along the old village street, old farmsteads, including some half-timbered buildings, characterize the village green. Not far from the church is the now renovated pigeon house of the former Dobraer Obermühle . The small building from the 18th century is now a listed building.

Annual Indian festivals and the Dobra riding and jumping tournament are known beyond the region.