Coat of arms of the city of Wahrenbrück

Uardenbruke (Wardenbrücke) is made up of the unique word waiting , which on the one hand means "observation" or is derived from the Old High German warta as "warn" and "true" and "bridge" together. Accordingly, a bridge at a control room .

A vaulted, three-arched silver bridge in red, set with a pointed silver tower.

The coat of arms of Wahrenbrück is a talking coat of arms , a watchtower or watch tower on a bridge describes the city name.

Even the oldest seal in the city contained a coat of arms, which showed a bridge in plan view with a chain on each side. Signature of the seal was S. DER RADT CZV WARDENBRVCKE SAX (= in Saxony)

The above coat of arms is part of the seal from 1657 with the signature DES STEDTLEINS WARENBRUCK SIGL 1657 .

In 1199 Konrad II von Landsberg laid the boundaries of the Dobrilugk monastery in Villa Uardenbruke . There was probably a castle at the transition to the Schwarzen Elster . 1202 arbitrated Konrad II. A dispute between the priest Hartbertus and the monastery of Cistercian in Dobrilugk . In 1210 Conrad II donated 16 Hufen in Lupsch to the monastery in Villa Wardenbrucke . In 1251 Heinrich the Illustrious gave the monastery in Dobrilugk patronage over the church in Wahrenbrück. In the Treaty of Rochlitz in 1289, Albrecht the Degenerate promised his son Friedrich Tuta the area, but then sold it to Friedrich I of Meissen . In 1300 Dietrich IV. , Albrecht's son, owned the place and the Dobrilugk monastery bought the mill in the place from Otto von Ileburg. In the Treaty of Tangermünde 1312, Wahrenbrück was awarded to Brandenburg . In 1340 Wahrenbrück was first mentioned as an oppidum (city) in an Ileburg document . The city was pledged to Meissen by the Brandenburgers in 1347, 1350 and 1353 and finally sold. Around 1383 Wahrenbrück came into the possession of Kursachsen . The Ileburger owned the city of Wahrenbrück together with other cities such as Liebenwerda , Uebigau , Sonnewalde , Dahlen , Strehla and the villages of Bönitz , Schmerkendorf, Marxdorf , Kölsa, Zinsdorf , Grabo (wüst) , Kiebitz, Bomsdorf , Langennaundorf , Beutersitz , Wildgrube . Since the 13th century, the Ileburger appeared first as bailiffs and later as owners. From 1384 the rule of Electoral Saxony was pledged to the Lords of Köckritz and partially redeemed in 1385 and then completely again in 1391. In 1422 Wahrenbrück was part of the personal treasure of Duchess Offka , widow of Elector Albrecht III. ; In 1459 the city of Wahrenbrück was included in the Bohemian-Saxon legacy .

During the Thirty Years' War the city was burned by Croats in 1631 , besieged and destroyed by Swedish troops in 1637 and 1643, and the plague raged, so that only five to six men survived. The inhabitants lived from agriculture, animal husbandry and handicrafts . The city ​​took over the wax , honey and bees market from Buckowien . The school was built between 1529 and 1533. In 1710 the cantor school was built. At times up to 13 villages were parish in Wahrenbrück. In 1730 the Kursächsische Postmeile Pillar was built directly on the bridge over the Black Elster.

Wahrenbrück belonged to the Electoral Saxon Liebenwerda Office and in 1816 became part of the Liebenwerda district created by the Congress of Vienna . Wahrenbrück was the smallest town in the Prussian province of Saxony . In 1835 the city had 92 houses with 652 inhabitants. 34 horses, 340 cattle, 27 goats and 75 pigs were counted as cattle.

The church, which is located directly in the city center, is considered the baptismal church of the musicians, Graun brothers, who were born in Wahrenbrück. The building dates from the 13th century and has undergone some renovations and extensions over the centuries. Inside is a facility that was largely built in the 19th century. There is also an organ here , which was created in 1984 by the Bad Liebenwerda organ building company Voigt . 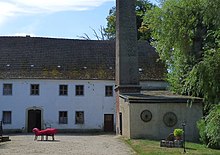 The historic Elstermühle can be found on the Kleine Elster in the immediate vicinity of the Kleiner Spreewald . The main building of the mill, built in 1805, at the location of which there was once an iron hammer around 1320 and which served as a paper mill at the time of its creation, is now a listed building and can be viewed on request and on various event days.

The next train stop is the Uebigau stop on the Halle – Cottbus railway line . The Wahrenbrück station on the Węgliniec – Roßlau railway line has been closed.