The title of this article is ambiguous. Further meanings are listed under wax (disambiguation) . 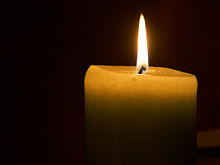 Burning candle made from synthetic wax

Wax ( Latin cera ) is an organic compound that melts at over 40 ° C and then forms a liquid of low viscosity . Waxes are almost insoluble in water , but soluble in organic, non-polar media . Waxes can be very different in their chemical composition and origin, which is why they are now defined by their mechanical-physical properties.

Due to the numerous groups of substances that show waxy behavior (which in practice also occur as mixtures of substances), an exact definition for waxes has not yet been found. The definition of the German Society for Fat Science is widespread : A substance is called wax if it is kneadable at 20 ° C, solid to brittle-hard, has a coarse to fine crystalline structure, is translucent to opaque in color , but not glass-like , melts above 40 ° C without decomposition, is slightly liquid above the melting point (not very viscous ), has a strongly temperature-dependent consistency and solubility and can be polished under slight pressure. If more than one of the properties listed above is not met, the substance is therefore not a wax.

Myricyl palmitate, an ingredient in beeswax

Natural waxes are divided into fossil and non-fossil (recent) waxes; they are lipids . The main components of these mixtures are esters of fatty acids (also called wax acids ) with long-chain, aliphatic , primary alcohols , the so-called fatty alcohols . These esters differ in their structure from the fats and fatty oils , which are triglycerides with fatty acids. These waxes also contain free, long-chain, aliphatic carboxylic acids , ketones , alcohols and hydrocarbons. The prototype of a wax acid is montanic acid (octacosanoic acid) C 28 H 56 O 2 . There is no precise distinction between wax acids and fatty acids, as typical fatty acids such as palmitic and stearic acid are also involved in the structure of some natural waxes . This structure results in a chemical definition of waxes in which the above-mentioned mechanical-physical properties are not necessarily met.

Mycobacteria are the only known bacteria that form an outer shell made of special waxes, the phthiocerols .

Wax layers on leaves and fruits have the task of protecting plants from water loss. Vegetable waxes include sugar cane wax , the carnauba wax of the carnauba wax palm, candelilla wax , which is obtained from various Euphorbiaceae , and, contrary to the name, Japan wax (berry wax) is a vegetable fat .

The jojoba oil is not composed of triglycerides and is therefore not a fixed oil , but chemically considered a liquid wax .

Semi-synthetic waxes are obtained from natural waxes; montan wax is often used as the basis, but other natural waxes are also used. Here the composition of the wax is influenced by physical or chemical changes; Oxidation (bleaching), hydrogenation , esterification , saponification , amidation .

The Fischer-Tropsch waxes made from synthetic paraffins (FT paraffins) (hard wax, medium waxes) from natural gas , biomass and coal , they are used for a wide variety of applications.

Micronized waxes are a special form in which the particle size is greatly reduced up to an upper grain limit of around 30 μm. This can be done either by grinding ( jet mill , cold grinding ), with the melt dispersion process , by atomization ( spray cooling , PGSS process ) or by bead polymerization . In the atomization or melt-dispersion process, spherical, regular particles with a small surface are predominantly obtained, while in the grinding processes broken, irregular particles with a large surface are obtained. Pearl-shaped particles are obtained in bead polymerization. Micronized waxes are used instead of wax powders and wax dispersions in printing inks and coatings, e.g. B. to achieve abrasion resistance , scratch resistance, water-repellent effects, matting, sandability and to improve the sliding properties. 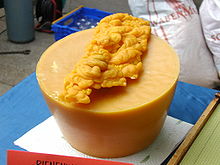 In addition to the uses already mentioned for candles , polishes and impregnations (e.g. wax paper for packaging ), waxes are used in foundries and because they are easy to mold for wax figures . In the fine arts, artists make models ( bozzetti ) for sculptures out of wax.

Jojoba oil and Japan wax are used in cosmetics . Special waxes are used for hair removal (see cold wax strips or warm wax ). They are also used in medical products such as dental wax preparations and as a raw material for soap production.

Waxes are used in construction to coat floors and wood. Polished waxes give surfaces a shiny appearance ( floor wax ), but also make them easier to slide ( ski wax ). Beeswax and some other natural waxes are approved as food additives (mostly as release agents ). For the historically correct restoration of furniture antiques (up to the Biedermeier period ; from then on, shellac was used), a special furniture wax, nowadays usually referred to as "antique wax", is used. It is rubbed into the wood and then polished off. As the name suggests, wax is an indispensable material for a wax museum ; These lifelike representations of the faces have not yet been achieved by any plastic . 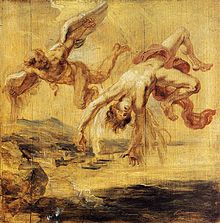 According to the legend, Daidalos , the father of Icarus , used wax to attach feathers to his and his son's arms and fly like a bird. Icarus got too close to the sun, which melted the wax; he fell and drowned in the sea.

Egyptian mummies are colored with wax paints; this technique is called encaustic . Nowadays, colored waxes are sold as crayons .

In the ancient and medieval medicine, the "pristine" light was virgin wax (of the non-incubated, not with honey or pollen coloring into contact coming in Honeycomb ) in the preparation of various drug use.

Sealing wax was until the 16th century to the sealing of documents used. It was then replaced by the sealing wax known as Spanish wax .

In Greece and Rome, wax tablets were used as a basis for writing notes, as what was written could be erased.

In the Middle Ages , the craftsman responsible was a highly respected profession: the gingerbread maker . He produced fine expensive candles ( Candlemas ), honey and gingerbread .

In the Renaissance , Baroque and Classicism periods , valuable furniture was rubbed with wax and polished.

Wax work , also known as monastery work , was made from wax, such as the well-known Fatschenkindel, especially at pilgrimage sites .

From the end of the 19th century until the 1920s, phonograph rollers first used wax as a sound carrier for a predecessor of the dictation machine and later as the source material for the original recording, which could then be reproduced in various processes after gilding . For the shellac records produced from 1895 to 1955, as well as for singles and LPs , a wax sheet was always used initially for the original recording, and after the Second World War it was still used to transfer the tape recording. After silvering , the wax plate was used as a die for making die copies with which the records could then be pressed en masse.