Paraffin ( Latin parum affinis , 'little related' or 'not very reactive') describes a mixture of acyclic alkanes (saturated hydrocarbons ) with the general formula C n H 2n + 2 . Paraffin is fluid, oily or waxy, flammable, odorless and tasteless, non-toxic and electrically insulating, water-repellent, can be melted together with fats and waxes and is inert to many chemicals.

The possible uses of paraffin are very diverse due to its properties and non-toxicity. The main areas of application are as fuel, sealing, care and preservation. It is used as fuel, for example, in candles , oil lamps , in paraffin stoves, as a grill lighter, when breathing fire and juggling fire, for soaking the wood from matches or as a solid propellant for hybrid rockets .

Paraffin was discovered in 1830 by the Württemberg natural scientist Karl von Reichenbach during a series of tests to determine the components of the wood tar.

In American, the term paraffin is used in the same way as in German. In British English , an addition is necessary, otherwise it can be misunderstood: paraffin oil means petroleum (British petroleum , occasionally stone oil is crude oil ) and paraffin wax is paraffin . 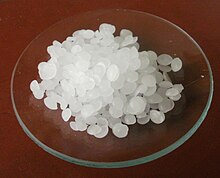 The properties of the paraffins can be derived directly from the homologous series of alkanes. For example, it is resistant to sulfuric acid , bromine and cold nitric acid . In its pure form it is translucent white. Paraffins are composed of unbranched ( n -) and branched ( iso ) alkanes.

Paraffin is insoluble in water, but easily soluble in gasoline , ether and chloroform . Paraffins have a particularly large increase in volume of up to 10% when heated up to the phase transition from solid to liquid.

Hard paraffins ( Paraffinum solidum ) as a solid mass have a solidification temperature of 50 to 62 ° C. In hard paraffins dominate n -alkanes, in microcrystalline waxes , however, the iso -alkanes. The molar mass is between 275 and 600 grams per mole. Hard paraffin melts between 50 and 60 ° C, soft paraffin at around 45 ° C. The micro-waxes have solidification points between 70 and 80 ° C and contain chain lengths ( n ) of up to 75  carbon atoms . Between the hard paraffins and the micro-waxes are the so-called intermediates, which have solidification points of 60 to 70 ° C. The heat of fusion is between 200 and about 240 kJ / kg.

Paraffin is obtained from the so-called lubricating oil cuts of the vacuum distillation of petroleum . When they are dewaxed, a by-product is slack wax , which still contains 2 to 30% oil. The raw paraffin is extracted from this sludge by deoiling with different oil separation processes (sweat deoiling, solvent deoiling, Sulzer crystallization deoiling). The raw paraffin is then further refined (see below). The extraction of paraffins also produces paraffin oils as a by-product , which can be further refined into white oils , which serve as high-quality lubricants . Refined white oils are also used in the pharmaceutical sector and in the manufacture of petroleum jelly .

The hard and intermediate paraffins are made from slack wax. This slack is produced as a by - product during the dewaxing of motor oils , for example by urea extractive crystallization . The sludge is freed from oil residues with the help of solvent, sweating and crystallization processes (the most modern process from Sulzer-Chemtech). These raw paraffins are then refined (hydrogenation or bleaching process), whereby aromatics , sulfur and nitrogen compounds are converted or removed. The refining creates a white, odorless product that can be used in the food, cosmetics ( Vaseline ) and pharmaceutical industries.

Micro waxes (also called microcrystalline waxes), on the other hand, are obtained from the vacuum residue from the engine oil refinery. Here need through a special refining process (for example, propane - deasphalting ) to remove the heavy crude oil components. Then the process (dewaxing, de-oiling, refining) is the same as for the other paraffins.

It is also made from lignite , bituminous slate and peat coals . The synthetic paraffins produced using the Fischer-Tropsch process (Sasol, Shell) , in contrast to products made from mineral oil , consist predominantly of unbranched n -alkanes.

Due to different compositions, production methods and different uses, paraffins are sold as microwax, ceresin (mineral wax, paraffin wax), white oil, petrolatum ( Vaseline ) and , unambiguously, as petroleum . The main buyer of paraffin worldwide is the candle industry (tea lights, household and decorative candles). It is cheaper than stearin or beeswax to which it can be added.

The water-repellent and insulating properties are used for the insulation of submarine cables , the sealing of glasses and bottles (see Parafilm ), as well as a water-repellent ( hydrophobic ) coating or, in the form of white oil, as an impregnation of paper, wood, textiles and insulating materials . It is also used for commercial explosives as moisture protection, the production of wax dispersions for the impregnation of wood-based materials, as a paraffinum liquidum for the care of wooden surfaces and as a paint polish additive.

Highly purified paraffins of different consistencies (liquid oils to solid waxes) have been used in cosmetic products such as creams, lotions and lipsticks for many decades. They have film-forming, protective and hydrophobic properties, promote gloss formation and give consistency. Paraffin is used as a base for ointments (e.g. in the form of Vaseline) and creams (e.g. for atopic eczema or neurodermatitis ), for cosmetic and medical products (e.g. lipstick ). Vaseline serves as a cold protection cream by preventing water evaporation from exposed facial skin and thickening the skin. In the military it is used as an additive in camouflage make-up .

In medicine, paraffin is used as a binding agent in ointments . Liquid paraffins (e.g. Nujol ) are used as a mild laxative and as an antidote for poisoning caused by orally ingested, fat-soluble toxins (to prevent absorption). Also for the preservation of anatomical specimens ( paraffinization ) and in archeology for the preparation of archaeological finds. Another application is in histology. Tissue samples are poured into special paraffins, sometimes with plastic additives for better cuttability, and then cut.

When making cheese , it is used for some types of cheese as a coating on the rind to preserve the loaf and protect it from drying out, for example in Edam or Gouda cheese . It is also used in the production of chewing gum and confectionery, as paraffin as a separating agent prevents sugar-coated dragees from sticking together under humidity.

Care and cleaning agents for wood and metal, for car paints or for shoe polishes also contain paraffin. Large quantities are also used for corrosion protection in the automotive industry (flood waxes) or as an additive to rubber products, for example tires (light protection waxes, ozone protection waxes). Light protection waxes can also be made from synthetic waxes obtained by means of the Fischer-Tropsch synthesis .

INCI -compliant indication of the ingredients (including Paraffinum Liquidum = paraffin (liquid)) of a cosmetic on the bottom of the back of the pack.

According to the current safety data, paraffin is classified as harmless to humans and the environment in accordance with the criteria of Regulation (EC) No. 1272/2008 (CLP) . Because of the wide range of possible uses - e.g. B. as a fuel for candles, as a component of pharmaceuticals, to protect food, as a cosmetic ingredient - an application-specific consideration is necessary to assess possible risks. Different scenarios of exposure such as B. inhalation, dermal application or internal ingestion are to be considered product-specifically. For mineral oils in lip care products, for example, the criteria defined for the food sector apply due to the possible ingestion of the product.

In the case of lip care sticks, in addition to possible absorption through the skin, oral absorption of hydrocarbons from products containing mineral oil is also being discussed. Against this background, there is a recommendation from COLIPA / IKW , according to which only paraffins and waxes that meet certain quality criteria are used in lip and oral care products. Taking into account this high quality and with reference to various carcinogenicity studies, industry and associations justify their assessment of the harmlessness of mineral oils in lipsticks.

The BfR believes that a final risk assessment is more difficult because there are still data gaps with regard to a possible oral intake from lipsticks. It recommends reducing the MOAH content as much as technologically feasible. A study by Niederer et al. Published in 2015 recommends limiting the content of mineral oils in lip care products to less than 5%.

The Federal Office for Consumer Protection does not expect paraffin in cosmetic products to have any harmful effects and largely rules out allergic reactions. The CIR (Cosmetic Ingredient Review - USA) expert groups assume that when applied topically, paraffins do not penetrate the skin and that these substances are therefore not hazardous.

The Stiftung Warentest responded to an inquiry about paraffin: “Natural cosmetics companies forego this ingredient, arguing that paraffin would lie like a film on the skin and prevent you from breathing. Not only the manufacturers of conventional cosmetics oppose this, but also dermatologists and cosmetic chemists: The paraffins used in cosmetics and the concentrations used are not expected to be harmful to the skin. "

The magazine Öko-Test warns of more than 10% paraffin in skin care products and massively devalues ​​creams with a content of over 10% in the test result, as this could promote the drying out of the skin and thus the formation of wrinkles. Öko-Test commented on this: "Paraffins: collective term for innumerable artificial substances made from petroleum (...) impede the natural regulatory mechanisms (...) can accumulate in the liver, kidneys and lymph nodes (...)."

The Federal Institute for Risk Assessment also took up the topic on May 26, 2015. The title of the opinion: "Mineral oils in cosmetics: According to the current state of knowledge, no health risks are to be expected from absorption through the skin". The BfR reports that according to the current state of knowledge, mineral oil products are only absorbed through the skin in very small amounts, if at all. Despite long-term and widespread use, no health effects from mineral oil components in cosmetic products have been reported.

The quality and purity of the mineral oil products are of great importance. According to the EC Cosmetics Regulation , mineral oils are only allowed in cosmetic products if the refining process is fully known and the raw material is free from carcinogenic substances or the distillate has been tested accordingly.