A moderator ( Latin : moderate, 'moderate') is used to slow down free neutrons , which are usually relatively high in energy ( i.e. fast) when they are released. The deceleration takes place through repeated elastic scattering on light atomic nuclei , i.e. those of nuclides with a low mass number (see also elastic collision ). The energy given off by the neutron is absorbed as recoil by the atomic nucleus that is hit; this releases it in further collisions as heat to the surrounding matter.

The word moderator can denote the material used for this purpose or a finished component, etc.

This “moderation” has to be conceptually differentiated from the slowing down of neutrons due to inelastic scattering on medium-weight materials such as B. Iron (sometimes called "degradation"). This is for neutrons with energies in the MeV range z. B. often used in shielding , often combined with subsequent moderation. In inelastic scattering, the energy given off by the neutron is mainly converted into the excitation energy of the atomic nucleus; the nucleus then emits it again as gamma radiation .

The average braking effect of an elastic impact is strongest when the mass of the impact partner is the same. In the case of a central collision , a single collision would be sufficient to bring the neutron to a standstill (see kinematics (particle processes) ). Therefore hydrogen , especially its most common isotope 1 H, whose nucleus is a single proton, is the most effective moderator in this regard. It is advantageous that hydrogen represents around 2/3 of all atoms in many materials (such as water, paraffin, many plastics). Deuterium can also be used as a component of heavy water , beryllium and carbon . As a substance that is always gaseous, helium is practically unsuitable. In numerical terms, the advantage of lighter elements as moderator is expressed by the mean logarithmic energy decrement .

The following table provides information about the average number of collisions necessary to decelerate a neutron released by nuclear fission (typical energy about 2 MeV ) to thermal energy .

To compare different presenters that can be moderation skills ( English moderation ratio ) use. It is calculated from the mean logarithmic energy decrement and the quotient of the cross sections for elastic neutron scattering (σ el ) and neutron capture (σ γ ).

Despite the high energy decrement, the moderation ability of light water is low because of the large collection cross-section .

The most important areas of application for moderators are nuclear reactors , in which the fast neutrons produced during nuclear fission of uranium- 235 or plutonium- 239 are decelerated to thermal energy. Fast neutrons rarely cause nuclear fission; a thermal neutron, on the other hand, triggers a new nuclear fission with a much higher probability (cross-section). A moderated reactor therefore requires a much smaller amount of nuclear fuel for the self-sustaining fission chain reaction (see also critical mass ) than a “faster” reactor that works without a moderator. In nuclear power plants, hydrogen (as light (ordinary) water ), deuterium (as heavy water ) and carbon in the form of graphite are used technically .

Ordinary water is used as a moderator in light water reactors . One disadvantage is the absorption of neutrons by the water. This neutron loss is offset by using enriched uranium ( 235 U) and increasing the amount of uranium. An argument in favor of light water reactors is that light water is inexpensive and non-flammable and will evaporate in the event of the reactor overheating (reactor accident). Then there is no more moderation and the chain reaction disappears.

Pure graphite is relatively easy to manufacture and shows very little neutron absorption. A graphite-moderated nuclear reactor can therefore be operated with non-enriched uranium (natural uranium). The first functional experimental reactor built in 1942 under the direction of Enrico Fermi in Chicago was designed in this way. Graphite-moderated power reactors are the British Magnox reactors , as well as the RBMK reactors developed later in the Soviet Union , which are only in operation in Russia today. During the Chernobyl reactor accident in 1986 , the chain reaction of the overheated RBMK reactor could no longer be interrupted; the graphite retained its moderating properties and thus power generation was maintained until the core meltdown . The greatest damage was caused, however, because the graphite (pure carbon) was burning and the hot smoke gases transported the radioactive particles to great heights. Another graphite-moderated power reactor type is the gas-cooled high - temperature reactor .

The choice of moderator has an impact on the properties of the reactor: 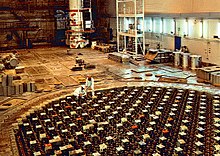 Breeder reactors do not contain a moderator because they want to be split by fast neutrons. The sodium used here for cooling (with its mass number 23) has a much smaller moderating effect than water.

Moderators are also used in shields against neutrons, often mixed with a thermal neutron absorber such as boron or a lithium compound.

In connection with a neutron source , a moderator is used when a neutron spectrum with a large thermal component is to be provided, for example for neutron activation measurements .

In many neutron detectors , the neutrons are brought to thermal energy by a moderator so that an absorption reaction such as 10 B (n, alpha) can then be used for their detection . One example is the long counter .

In all of these cases, hydrogen is usually used as a moderator, often in the form of solid paraffin or plastics .