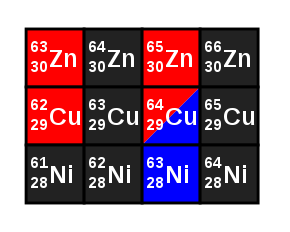 As isotope is called atomic species whose atomic nuclei same number of protons but different numbers of neutrons contained. They have the same atomic number and therefore represent the same element but have different mass numbers ; So there are oxygen isotopes , iron isotopes etc. The different isotopes of an element behave chemically almost identically.

The term isotope is older than the term nuclide , which generally means "type of atom". "Isotope" is therefore still often used in the sense of nuclide, i.e. H. even if we are not only talking about atoms of one and the same element.

Several isotopes have been found for every known element, with the exception of the oganesson , which was first synthesized in 2006 (see list of isotopes and nuclide map ). There are around 3300 nuclides in total. About 240 of them are stable. All the others are unstable, that is, their atoms transform into other atoms after a longer or shorter period of time through radioactive decay . For some nuclides traditionally regarded as stable, this time is so long that their decay has only been discovered today or is still being sought in experiments.

Of the 91 naturally occurring elements, 69 are found in nature as mixtures of several isotopes ( mixed elements ). The remaining 22 are called pure elements . The chemical atomic weight of mixed elements is the average value of the various atomic masses of the isotopes involved.

The name (from ancient Greek ἴσος ísos "equal" and τόπος tópos "place, place") comes from the fact that the isotopes of an element are in the same place in the periodic table . They are shown separately on a nuclide map . The term isotope was coined by Frederick Soddy , who received the Nobel Prize in Chemistry in 1921 for his work and knowledge in the field of isotopes and radionuclides .

The notation is described in detail in Nuklid . In the text, an isotope is denoted by the element name or symbol with the mass number attached, for example oxygen-16 or O-16, iron-56 or Fe-56. Exceptions are sometimes the hydrogen isotopes (see following section).

If an m appears in the designation (e.g. 16m1 N), this means a core isomer . If there is a number after the m , this is a numbering if there are several isomers.

Isotopes of an element have the same electron shell. As a result, they do not differ in the type of possible reactions , but only in their reaction speed , because this is somewhat dependent on the mass.

The relative mass difference is very small for heavy elements. The ratio of the atomic masses of uranium- 238 and uranium-235 is 1: 1.013; there is no noticeable difference in their chemical behavior; physical methods must be used for separation (see uranium enrichment ). For the lithium isotopes lithium-7 and lithium-6, the ratio is 1: 1.17; physical-chemical separation methods are possible here (see lithium ). The mass differences of the three hydrogen isotopes are very large ( 1 H:  2 H:  3 H like 1: 2: 3), which is why they react slightly differently chemically and even have their own names and chemical symbols:

The different chemical-physical behavior of H and D shows up in the electrolysis of water . Water with normal 1 H reacts preferentially and is broken down into hydrogen and oxygen, while water molecules containing D ( 2 H deuterium, heavy hydrogen) accumulate in the remaining water (compared to the natural ratio of about 1: 7,000).

Almost all naturally occurring nuclides on earth are either stable (ie no decay was observed) or are radioactive with a half-life that is not significantly shorter than the age of the earth . These are called primordial nuclides .

A total of about 245 stable nuclides are known (see nuclide map : stable nuclides are shown with a black background). In the case of “stable”, however, a distinction must be made between whether the decay of the nuclide appears to be excluded by natural law or whether it appears possible but has not yet been observed. The number of nuclides that are stable in the latter sense has decreased again and again over time: Thanks to improved detection methods, some nuclides that were previously regarded as stable were later recognized as radioactive. With the detection of the radioactivity of bismuth -209 in 2003 it was found that lead -208 is the heaviest stable nuclide and lead is the heaviest element with stable isotopes.

Elements occurring in nature are mostly mixed elements, i. H. Isotope mixtures. The most natural isotopes has tin with 10 isotopes, followed by xenon with 9 natural isotopes, 8 of which are stable. Elements that only consist of one natural isotope are called pure element . A pure element has exactly one primordial isotope. This property has 19 stable and 3 long-lasting unstable elements.

Hydrogen is the element with the strongest chemical isotope effect . Heavy hydrogen ( 2 H or deuterium ) serves as a moderator in the heavy water reactor . Heavy hydrogen ( 3 H or tritium ) is radioactive. It is created in the atmosphere by cosmic rays and in nuclear reactors. Tritium was used in luminous paints for clock dials, etc. between about 1960 and 1998. In the future, deuterium and tritium will be used in larger quantities as fuel for nuclear fusion reactors .

Helium is the element with the strongest physical isotope effect . The two helium isotopes behave very differently, especially in the low temperature range, since 3 He is a fermion and 4 He is a boson .

A well-known isotope is the radioactive 14 C , which is used to determine the age of organic materials ( archeology ) ( radiocarbon method ). Natural carbon is mainly found in the stable isotopes 12 C and 13 C. 14 C is formed from nitrogen in high atmospheric layers.

The isotope 235 U is used as fuel in nuclear power plants . For most types of reactors, the natural uranium must be enriched with 235 U. Almost pure 235 U is used in some nuclear weapons .

In measurements of the optical spectrum with sufficient resolution, isotopes of an element can be differentiated by their spectral lines ( isotope shift ).

The isotopic composition in a sample is usually determined with a mass spectrometer , in the case of trace isotopes with accelerator mass spectrometry .

Radioactive isotopes can often be identified by their decay products or the ionizing radiation given off.

Isotopes also play a role in NMR spectroscopy . For example, the common carbon isotope 12 C has no magnetic moment and is therefore not observable. Investigations on carbon can therefore only be carried out with the much rarer 13 C isotope.

Isotopes are also used in the elucidation of reaction mechanisms or metabolisms with the help of so-called isotope labeling .

The isotopic composition of water is different and characteristic in different places in the world. These differences make it possible to check the declaration of the place of origin for foods such as wine or cheese .

The investigation of certain isotope patterns (especially 13 C-isotope patterns) in organic molecules is called isotopomer analysis. Among other things, it allows the determination of intracellular substance flows in living cells. In addition, the analysis of 13 C / 12 C, 15 N / 14 N and 34 S / 32 S ratios is widespread in ecology today. On the basis of fractionation is mass fluxes can be in food webs track or Trophieniveaus determine individual species. Stable isotopes also serve as natural tracers in medicine .

In hydrology , conclusions about hydrological processes are drawn from the concentration ratios of isotopes. The water cycle accompanies most material flows above and below the earth's surface. The Vienna Standard Mean Ocean Water (VSMOV) is often used as a reference.

The geochemistry deals with isotopes in minerals , rocks , soil , water and atmosphere .