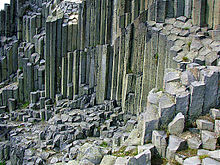 As rock is known more or less solidified, naturally occurring microscopic typically heterogeneous mixtures of mineral grains , rock fragments, organic or inorganic precipitations or residues of living things . The mixing ratio of these components fluctuates only slightly within a given rock body, so that when viewed with open eyes it usually appears uniform (homogeneous).

Most of the rocks in the earth's crust (and also on the other terrestrial planets) are silicate rocks (main components quartz , feldspars , amphiboles , pyroxenes ), only a small part of the rocks consists mainly of carbonates or other mineral classes or groups of substances.

A larger volume of a particular Gesteines located in the crust or in the field comes to light , is commonly called rock formation called (not the same as the while similar but much more precisely defined formation term in Lithostratigraphy ).

The geological rock concept is broader than the colloquial and also includes naturally occurring metal - alloys , volcanic glass , ice , loose sand or coal a. The study of rocks, petrology , is a branch of the geosciences . Examples of different types of rock can be found in the list of rocks .

The earth and the inner planets of the solar system are made up of very large, spatially connected masses of rocks. However, these are only visible and accessible on the surface of the earth's crust , especially in mountains that are created by tectonic processes of mountain formation .

The doctrine of working and processing rocks and earth, the character of which is non-metallic, is called rock metallurgy .

In medicine, the formation of gallstones , salivary stones and kidney stones is also referred to as lithogenesis.

Rocks essentially consist of minerals, of which only about thirty have a significant share in rock formation, which are therefore called ' rock-forming minerals '. Above all, these are silicates such as feldspars , quartz , mica , amphiboles or olivine , but carbonates such as calcite or dolomite are also important components of rocks. In addition to these main mixes (the mineral components that make up more than 10% of the total mass), most rocks also contain so-called secondary mixes (components that make up between 10 and 1%) or accessories (components that only contain <1%) . Often the accessories give a rock its name. Furthermore, a certain amount of water is always present, as crystal water or pore water .

The structure of a rock is primarily its texture - the spatial location and distribution of the minerals in a rock, which results from the properties and the ratio of the rock-forming minerals to each other - and the structure , which relates to the geometric properties of the individual rock components . These include relative and absolute size , the shape of the crystals or mineral grains and the type of grain association.

Rocks can be roughly divided into three classes according to their origin: igneous rocks , sedimentary rocks , and metamorphic rocks . Further subdivisions are made within these classes. The entire history of a rock, from its original formation to its present state, is known as petrogenesis.

In geotechnics and numerous related sciences such as soil science , rocks are fundamentally divided into two groups based on their mechanical properties, solid rock and loose rock . In the case of hard rocks of workability and availability in particular under the aspect of hard stones of soft rocks distinguished. 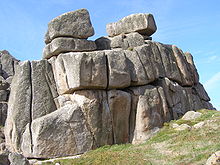 Igneous rocks (igneous rocks, solidification rocks) arise from the cooling and crystallization of the molten material from the interior of the earth, the so-called magma . The nomenclature of igneous rocks according to their mineral composition can be read in the route iron diagram .

If the cooling takes place deep in the earth's crust (deeper than 5 km), one speaks of plutonites or intrusive rocks (deep rock). Due to the relatively good thermal insulation of the rocks on top of it, the magma melt only cools down slowly, so that large mineral crystals that are clearly visible and distinguishable with the naked eye can arise. Examples of plutonic rocks are granite , granodiorite , syenite , diorite or gabbro . The magma can form huge masses of rock, known as plutons , which often comprise several thousand cubic kilometers of rock.

However, magma can also emerge in a liquid state as lava on the earth's surface. There it cools down quickly and then forms so-called volcanic rocks or effusive rocks (effusive rocks). Due to the rapid cooling, no crystals visible to the naked eye can grow, so that volcanites such as basalt , andesite , rhyolite and trachyte are predominantly very fine-grained. When deterred by contact with water, there is no crystalline order at all, but rather volcanic glass such as obsidian .

Dike rocks form the links between plutonites and volcanites. They penetrate the crevices between the magma chamber and the surface of the earth and solidify there as corridors . Examples of dike rocks are granite porphyry , dolerite and lamprophyre .

Metamorphic rocks (transformation rocks) arise from older rocks of any type through metamorphosis , i.e. through transformation under high pressure or high temperature. During the transformation, the mineral composition of the rock usually changes because new minerals and mineral aggregates are formed; the rock chemistry remains largely the same. In addition, the rock structure can also be transformed. For example, results from quartz sand stones by growth of quartz grains lining the sediment grains and the resulting close integration with each other, the metamorphic rock quartzite , formed from limestone, by recrystallization, the on fracture surfaces typical "sugar-grained" marble (both are examples of largely mono-mineral rocks, in which no or no significant changes in the mineral inventory occur during the metamorphosis).

If the deposits are covered by sedimentation of further material, they become more and more compact due to pressure, the supply of binder and increased temperature with increasing loss of water, until a hard, brittle sedimentary rock has emerged from the soft sediment. These changes after the primary sedimentation are called diagenesis .

Examples of sedimentary rocks are sandstone , limestone, and rock salt .

Sediments are usually deposited cumulatively in a sequence of horizontal layers; Due to the order of the deposition, in exceptional cases, higher layers are younger than lower, a finding that goes back to the Danish doctor and geologist Nicolaus Steno as a superposition principle or storage law . After their formation, sedimentary rocks can be subject to strong forces, as a result of which the previously flat layers are folded and tilted, so that the position of the rock in space can be changed so much that the original layer sequence is locally reversed.

Sediments can be roughly divided into terrestrial land and marine sea ​​sediments. Terrestrial also includes deposits in freshwater lakes or rivers that have arisen from sand or mud, as well as the organic plant remains from which coal has arisen . Even deserts sediments and deposits of glaciers are allocated to this group. A borderline case between volcanic rocks and sediments are volcanic ashes and tuffs .

Marine sediments may be prepared by deposition of erosion material other rocks on the seabed, by caused by biochemical processes precipitation, for example, from carbonates , and by the deposition of inorganic skeletons of microorganisms such as Foraminiferen , Coccolithophores (Haptophyta) Strahlentierchen (Radiolaria) and diatoms formed (Bacillariophyta).

Meteorites, rock bodies from space, are a special case of rocks . Meteorites are evidence of the early history of the solar system and contain numerous minerals that cannot be found in other rocks of earthly origin. According to their mineral content, they can be divided into stone meteorites , which primarily consist of silicates such as olivine or pyroxene , iron meteorites , which are often composed of the iron-nickel minerals kamacite and taenite , and stone-iron meteorites , which are a mixed type. The size of meteorites lies between that of micrometeorites and huge rock bodies weighing tons. Almost all of the meteorites known to science fell on Earth very recently, on a geological time scale . Only a very small part is present as so-called "fossil meteorites". Such pieces have been found in Sweden in sedimentary rocks several hundred million years old.

Of earthly origin, but formed by meteorite impacts, are the tektites , centimeter-sized glass objects that are formed by the melting of earthly rock and subsequent rapid cooling in the air, and the impactites , which are caused by the strong mechanical and thermal effects of a meteorite impact at the site of the impact existing rocks arise, such as suevite .

Igneous, metamorphic and sedimentary rocks are transformed into one another by geodynamic processes such as erosion , rock metamorphosis or sedimentation .

Metamorphic and igneous intrusive rocks exposed by erosion of the cover rock, as well as the sedimentary and igneous extrusive rocks formed on the surface, are subject to weathering and erosion. Primarily due to wind or water-related transport, the weathering components are deposited as sediments and finally form sedimentary rocks through compaction. Like igneous intrusive rocks, these transform into metamorphic rocks at great depths under high pressure and high temperature. The cycle closes when these either return to the surface or are melted down further into the earth's interior and thus form the raw material for the formation of igneous rocks.

The oldest rock that has been reliably dated to date comes from the Acasta gneiss formation of the slave craton in northwest Canada with 4.031 ± 0.003 billion years (dated 1999). In 2008, researchers from McGill University in Canada claimed to have found an even older rock, 4.28 billion years old , in the Nuvvuagittuq greenstone belt on Hudson Bay in northern Canada. This dating is controversial, the age of these rocks is still the subject of research.

Grains made of minerals that are particularly resistant to weathering , for example quartz , can repeatedly pass through at least the exogenous part of the rock cycle. Grains made from minerals, which also have a particularly high melting point, can even go through complete cycles. One such mineral is zircon , and the oldest evidence of a solid crust on earth are grains of zircon. These originate from metasediments in the Jack Hills (Western Australia), which were deposited 3 billion years ago. However, some of the zircons in it had crystallized from magma 4.4 billion years ago.

In the history of mankind , stone served as the first material for the manufacture of tools , stone implements , and is therefore also the namesake for the oldest cultural and historical earth epoch, the Stone Age . Archaeological finds from that period are mostly stone artifacts . Stones are the oldest solid building material of human culture and the oldest known traditional written carriers of human writing .

The art of working stones is called lithurgy .

In earlier times, entire structures were built from stone. Today they are an essential ingredient in the interior ( flooring , stairs , window sill , vanity and kitchen countertop ) and (in the exterior facades clothing or paving stone ). Furthermore, they are the basis of pictorial representations in art, especially in lithography and as the starting material for sculpture . Gemstones , precious and semi-precious stones as jewelry popular. Stone piles and dry stone walls used to be used to mark fields and are now valuable biotopes . A boundary stone is used to demarcate areas. Fossils in the form of fossils bear witness to living beings from earlier aeons, epochs and periods and play a major role in the study of past life forms, evolutionary history and the dating of rock layers.

On the cultural history of stone