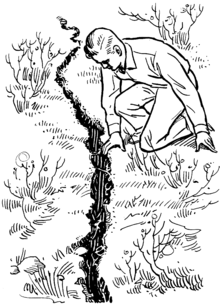 Fissure eruption near Pyre Peak on the Aleutian island of Seguam

A column ( English : fissure or crevice ) is in the geology and in the mining a gaping joint or interface within a rock body .

Small crevices are tectonic movements, such as earthquakes , expanded into columns distortions open, but also by the intrusion of igneous rock melts and the cooling of volcanic lava. The size of a column is in the range of a few millimeters to meters in width and several centimeters to hundreds of meters in length and depth.

In terms of geodynamics, the crevasse is also one of the geological crevices.

Exokinetic gaps (or dislocation gaps ) are created by

Fissures close to the surface are often filled with debris from the surrounding rock and with sediments ("sediment ducts"), for example in the Korbach fissure . Deeper crevices, on the other hand, can allow groundwater and thermal water to rise , which then emerge as springs on the surface of the earth . If mineral-rich waters that seep in from the surface or hydrothermal solutions from the depths circulate in open crevices, so-called fissure minerals can precipitate on the walls of a crevice until it is completely closed ("heals"). If such mineral veins contain economically valuable ores, they are referred to as vein deposits . Fissures that are filled with igneous rock are rock passages .

From some crevices - for example over karst caves - cool air penetrates to the surface of the earth. Vapors can also rise from other crevices , as has been passed down for example from the oracle of Delphi , which is said to have put the seer Pythia into a trance.