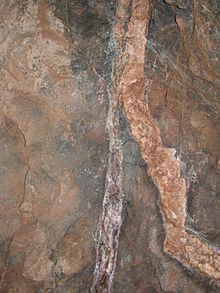 Uranium-bearing mineral veins in a skarn : left a vein with quartz and calcite (as well as violet fluorite ) as a vein ("kku formation"), right, overprinting the kku vein, a vein with dolomite (and goethite ) as a duct ("mgu- Formation ”), Western Ore Mountains

A corridor is a mostly elongated, plate or lens-shaped rock that is the filling of a crevice in another rock . This other rock body, i.e. the rock surrounding the corridor, is referred to here as the adjacent rock. In mineral transitions are minerals been precipitated from aqueous solutions in dykes are magmatic melts penetrated and crystallized. Fissures filled with sediments are sometimes referred to as passages (see Neptunian Dike ).

The two boundary surfaces of a corridor intersect approximately horizontal natural surfaces such as the surface of the earth, the bottom of a mine or an imaginary horizontal plane in a line or linear track, the course of which is called strike , the angle between this line and the north direction accordingly strike angle . Analogously, the inclination of the corridor to the horizontal, i.e. perpendicular to the stroke, is called falling , and the corresponding angle is called the falling angle . Strike and fall angles thus clearly describe the spatial position of a corridor and are now usually determined with a geological compass and then in degrees or gons [formerly. "Grad"].

In historical ore mining, corridors were named after their direction, among other things. The farmer Morgengang, for example, strokes with 68 ° E. The name “morning walk” has its origin in the fact that the rose on the mountain compass used for surveying at that time was divided into two twelve hours , each of which was summarized in four sections:

According to their angle of fall, gears are mined in:

The Bauer Morgengang falls between 60 and 68 ° N and is therefore a ton-long gait. 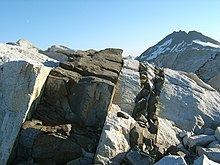 The contact surface of a dike with the host rock is called the salband . A corridor usually becomes gradually thinner and thinner towards the end and disappears (it wedges out ) or it splits into several small ruins . If several aisles are parallel behind or next to each other, one speaks of an aisle train . However, the courses often have (more or less systematic) deviations in the strike directions from one another, e.g. B. in regional shear zones. In this case one speaks of a gang . When two courses join together in a fork shape, this is called a cluster . Two intersecting passages form a passage cross ; Multiple crossing corridors form a corridor network . If two or more corridors or corridors meet, they flock . Shares are usually ore bringers, which means that miners can find rich mineralization more often than in the normal course of the vein. Often the thickness of a corridor increases and decreases in its course (in mining terms : pushing away and opening up ). This is due to the fact that a rift changes its direction during its tectonic formation as soon as it encounters a type of rock with different physical properties. In the event of further tectonic stress, the rift sometimes develops into a real geological fault , on which the neighboring rock packages move past each other, often a vein breccia at the contact surfaces between the dike and the disrupted bedrock . In the sections of the original cleft that have a greater angle to this general direction of movement, larger crevices and cavities open up during this process, which can be filled by volcanic magmas or mineral-containing solutions. Only small gaps are formed in the sections that form an acute angle or no angle at all to the fault. In heavily stratified rocks, e.g. B. in regular alternation of limestone and sandstone, this circumstance sometimes leads to distinctive pearl-like swelling and swelling of the corridors.

A storage gallery or Sill is concordant , that is penetrated in parallel to the layering in its host rock, while the other types of programs, the stratification of the country rock discordant penetrate. Special cases are cylindrical or conical dykes ( ring ducts or cone sheets ), which can be found around volcanic collapse craters ( calderas ), and curved saddle ducts at the apex of tectonic folds .

Rock dikes (sometimes called eruptive dikes ) can consist of deep rocks , such as granite or gabbro , or from the series of dikes that have differentiated from the residual magma after the deep rocks have crystallized out. From acidic (granitic) magmas z. B. Dikes of aplite and pegmatite , lamprophyre dikes are possibly the dikes of basic ( basaltic ) magmas. Often there are also sub-volcanic dikes, which accordingly consist of the sub-volcanic equivalents of the deep rock, for example granite porphyry and dolerite . Because they are so typical of magmatic dikes, they are also called dike rocks . Rock passages are rarely found that have arisen by filling open crevices on the surface of the terrain or on the bottom of water bodies with sedimentary rocks, sandstone passages or Neptunian dikes .

Mineral veins are often filled with quartz , fluorspar , barite , calcite , etc. When they contain certain metalliferous minerals of economic interest, they are known as veins . If necessary, they can be developed as a dike deposit in a mine .

Accompanying minerals that occur together with the ore minerals are called gangue . The most important gangue minerals are quartz , calcite , dolomite , barite and fluorite .