Bouldering in Lower Jurassic limestones in an outcrop near Bédarieux , on the southern edge of the Causse du Larzac , Hérault, France. The northern block (on the right in the picture) has been pushed against the southern one. The layers were dragged (bent) near the fault surface. 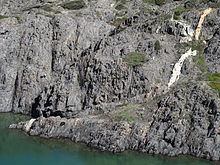 In geology, a fault or dislocation describes a tectonically caused structural change in a rock formation. Older rocks, which have been tectonically stressed several times in the course of their geological history, usually show several generations of faults, of which only the most recent is undisturbed.

For the latter context, the terms disruption and rejection are often used synonymously. In addition, in a somewhat fuzzy way, the interface created by the tectonic movement at a fault is also referred to as a fault. However, this is more correctly to be referred to as a fracture, fault or fault surface .

Sometimes the movement process itself, which, however, usually cannot be observed directly, is called a disorder .

Faults can occur on various scales, starting with ductile shear zones, which are only visible in a thin section under the microscope, over centimeters to several meters measuring faults, folds and ductile shear zones on the scale of a handpiece or outcrop , up to fracture and shear zones that stretching for hundreds or even thousands of kilometers, such as the San Andreas Fault in California.