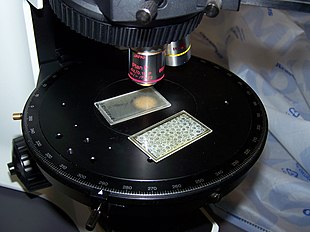 Rock thin sections on the stage of a polarizing microscope

A thin section is a solid preparation for microscopic examination. The examined materials are predominantly rocks, ceramics and all materials which are transparent in thin layers, but which cannot or only poorly be cut accordingly thin, for example wood, bones and teeth.

Rocks , soils and ceramics are almost invariably opaque and therefore cannot easily be examined under a transmitted light microscope . Only from a thickness of 0.03 to 0.02 mm (30 to 20 µm) does a sample of these materials allow sufficient light to pass through so that they are suitable for transmitted light microscopy. The examination is carried out in normal and polarized light as well as with special wavelengths (e.g. UV light). 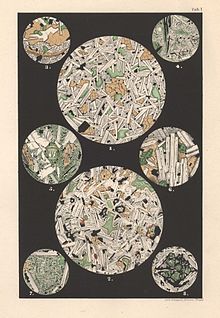 Historical drawings of Melaphyr thin sections under the microscope, from 1876

The method was developed in the first half of the 19th century by several scientists independently of one another, whereby the earliest attempts can be traced back to the English physicist William Nicol , who made such preparations as early as 1831 and also published a description of the process. But it was only the English naturalist Henry Clifton Sorby who systematically applied the method to rocks and published an article in the Journal of the Geological Society in London in 1858 .

In the field of palaeontological research, the geoscientists Franz Unger and Carl Ferdinand Peters made early achievements with thin-section microscopy . In 1842, Unger described his method of using thin sections when examining fossil woods. Around 1840 he had made finite thin sections of such objects on behalf of Stephan Ladislaus . Peters carried out (published) thin sections around 1855 in order to obtain further information for taxonomic assessments.

Ferdinand Zirkel made a decisive contribution to the dissemination of this research method in the geosciences , who presented it on February 3, 1863 at a meeting of the Imperial Geological Institute and who had previously learned from Sorby. After that, the method quickly found its way into the practice of petrography . The first textbooks on the subject were published in 1873 by Ferdinand Zirkel and Karl Heinrich Rosenbusch .

In the 19th century, the representation of thin-section images was a problem that could only be solved in an unsatisfactory manner for the specialist literature, because the printing techniques of the time did not enable an authentic reproduction of the often demanding structural images. For this reason, it was at times common to create corresponding thin-section images by drawing with subsequent hand coloring and to implement them in printing with the means of lithography .

Thin section preparation of a phyllite

To produce a thin section of stone or ceramic, a 0.5-1.0 cm thick disc is sawn off the sample using a diamond-tipped saw blade. The pane is sanded by hand on one of the cut surfaces and fixed with this surface on a thin glass plate using a relatively easily soluble adhesive. The glass plate with the sample is then clamped in a precision grinding machine and the sample is ground from the other side until it is completely flat. After the glass plate with the sample has been removed from the grinding table, the flat surface is glued to a glass slide using a special synthetic resin (in the early years with Canada balsam ) . The now almost finished preparation is removed from the glass pane after the resin has hardened. The slide is clamped in the precision grinding machine and the sample is now ground down to the desired thickness (standard thickness for mineralogical thin sections is 25 µm) from the other side, which was previously attached to the glass pane .

Technical granular preparations or unstable sedimentary rocks (e.g. many types of quartz sandstone ) are first poured into synthetic resin or impregnated with synthetic resin and, after the resin has hardened, further processed like the above-mentioned solids.

To produce a thin section of the soil , an undisturbed soil sample using Kubiëna boxes (named after WL Kubiëna, who with his micromorphological studies on soils carried out since the 1930s, undoubtedly pioneered the field in this area) and modifications of these boxes is used. If extraction with Kubiëna boxes is not possible due to a high stone content or larger artifacts, larger frames can be used or the sample can be coated with plaster. The soil samples are finally dried in the laboratory (air drying, freeze drying or drying over acetone ). They are then poured into synthetic resin in a vacuum cabinet (so that no air bubbles remain in the samples), similar to granular technical samples or sediment samples . After the resin has hardened, proceed as described above .

For some more specific examinations (micro sample etc.) uncovered samples are necessary. The sample can also be covered with a cover slip. For examinations z. For example, polished, uncovered sections are required on the microprobe; this requires special methods that do not create a relief.

In bone pathology , thin sections are used for the microscopic examination of biological hard tissue ( bones and teeth ) and especially for assessing the healing of metal endoprostheses (for example hip joint prostheses or dental implants ). Experimental studies with systematic microscopic examinations of rows of sections at the interfaces between bone tissue and implant can significantly improve the surfaces of endoprostheses so that the implant is optimally accepted by the body.

For the production of bone tissue thin sections , the bone tissue is fixed and then embedded in PMMA resin (Plexiglas) without decalcification . After hardening, the entire plastic and tissue block can be sawn thin and then sanded down to a thickness of µm until it is transparent and colored if necessary. With the polarization microscopy of these tissue thin sections, especially the collagen fiber bundles oriented along the force vectors can be made clearly visible without histological staining .

When examining rock samples , a distinction is made between qualitative and quantitative goals. Furthermore, general characteristics are the purpose of consideration.

Results and interpretation in soil science

Before you can interpret a thin section, it is first necessary to describe this thin section and further thin sections of other samples that are directly or indirectly related to it (if any) in detail.

In soil science and archeology , among other things, the following are recorded:

To characterize these components, among other things, size, shape, texture, variability, frequency, color, translucence, relationship and position of the components to each other and any resulting patterns are described.

The more or less pronounced characteristics and combinations of characteristics visible in the thin section of the soil are a “snapshot”: They reflect the development of a soil and the processes in it up to the point of sampling. From an archaeological point of view, charcoal residues, bone fragments, particles of burnt clay, slag and ore residues, excrement, eggshells, herringbones, etc. are of particular interest, because - depending on the position in the profile - ideally one can use the "microscopic finds" in thin section ( in connection with other thin sections of the same finding as well as possibly existing "macroscopic finds") reconstruct the history of a finding: From the former use or function of an object itself (for example of mine houses), through the environmental conditions (e.g. animal husbandry) to for backfilling an object as well as the origin and composition of this backfill material, which can document human activities in the vicinity of the finding.

If opaque materials are only to be examined in incident light, one-sided ground and polished surfaces on the object, so-called bevels, are sufficient.

Even within metallography , one occasionally works with micrographs .

The methods used in medical research to produce soft tissue sections (hard tissue containing calcium carbonate must first be decalcified) for transmitted light microscopy are described under Histology and Microtome .