The title of this article is ambiguous. Further meanings are listed under bones (disambiguation) .

The bone ( Latin Os , plural Ossa , Greek οστούν in compositions osteo- ; German also leg , from Germanic root, compare sternum , ivory , ossuary and English bone ) is an organ that is resistant to pressure and tension . The endoskeletons of vertebrates are made of bones . The adult human skeleton is made up of around 205 bones. The number varies, as there can be different numbers of small bones in the foot and spine . Small bones, such as the accessory bones in the carpal or tarsus, are often referred to as ossicles .

Bones are part of the musculoskeletal system and are classified as part of the passive musculoskeletal system. The individual bones look different depending on their location and function. At the same time, the bones protect internal organs , such as the skull bones the brain and the thorax the heart and lungs . The red blood cells , platelets and white blood cells are also formed in the red bone marrow . The size varies from the only millimeter-sized ossicles of some small mammals to the meter-long leg and rib bones of dinosaurs .

Originally parts were the endoskeleton with leg (. MHG, OHG. Leg ; plural: legs , collective: bones ) referred, since the 14th century to that of knoche (mhd.) Or knoke (mnd.) Derived bone . This probably originally onomatopoeic word (cf..  Crack , Eng.  To crack ) largely displaced the older leg . In the German names of some bones, however , the word leg still occurs, for example in almost all skull bones . See also ivory . 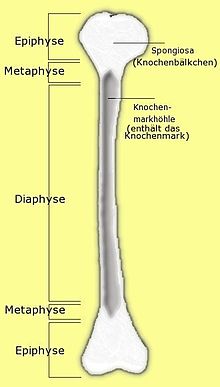 Schematic structure of a long bone

The osteology as part of the field of anatomy differentiates between different bone shapes:

Bones are living organs with a good blood supply and are made from various tissues . The mechanical properties are largely determined by the bone tissue . This forms the substantia corticalis on the outer surface of the bone (in the middle part of long bones this is very thick and is therefore also known as substantia compacta ) and inside the substantia spongiosa , a spongy framework of fine trabeculae, which are always arranged in such a way that that they are only subjected to compression or tension. The substantia corticalis accounts for 70% of the bone density in adults and 30% in children. The bone tissue consists of 25% water, 30% organic and 45% inorganic components. The organic parts consist of 95% collagen of type I.

A medullary cavity ( Cavitas medullaris ) is formed in the shaft of long bones . The bone marrow ( medulla ossium ) is located in the medullary cavity and in the spaces between the cancellous bone and is gradually replaced by yellow fat marrow in the course of life. Red bone marrow is only preserved in a few bones (ribs, sternum, vertebrae, carpal and tarsal bones, flat skull bones and pelvis). There are blood-forming cells (see hematopoiesis ).

The bone is surrounded by a Bindegewebshaut, the outer bone skin ( periosteum ) , which closely abuts it. All inner surfaces (inside of the cortex, surface of the trabeculae, vascular canals through the bone tissue) are covered with the inner periosteum ( endosteum ) . The bone is covered with cartilage on the joint surfaces , the periosteum is interrupted here. 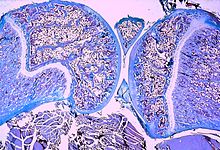 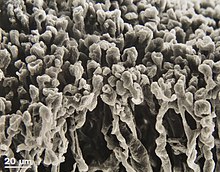 From the embryonic connective tissue, the mesenchyme , among other things, osteoblasts develop in the vicinity of blood capillaries . These cells form the soft osteoid (collagen-containing connective tissue), the still uncalcified basic bone substance. Over time, they accumulate hydroxylapatite ; the bone only becomes hard and stable when this calcium phosphate is stored. Osteoblasts that are completely surrounded by bone matrix are called osteocytes.

The growth in length of a bone is subject to a circadian rhythm with a main maximum at night (study on rats). According to the results of studies by American researchers at the University of Wisconsin – Madison , bones mainly grow at night. The cause of the so-called growing pains that occur especially at night, especially in the lower extremities in children, has not been clarified. Up to a third of all children between the ages of three and twelve suffer from growing pains.

One can distinguish between two different types of bone development ( ossification ).

The long bones grow in the cartilaginous epiphyses or growth plates between the shaft and epiphyses, with blood vessels sprouting in and forming a labyrinth of widened blood capillaries against the growth plate. The cartilage cells divide lengthways towards the shaft (diaphysis). This growing cartilage ossifies from the shaft. This causes the epiphyses to move apart and the bone to become longer. The growth plates emerge from the cartilaginous bone structure. They close at the end of the growth in length; this happens at slightly different ages depending on the bone. Since the growth joints are visible radiologically, the joint seal can be used to determine the age of the forensic medicine.

Bones are not a rigid structure, but are subject to permanent reconstruction. One speaks here of bone tissue remodeling .

Injuries and diseases of the bone

If a bone breaks due to external influences or due to a lack of bone mass, it is referred to medically as a broken bone (fracture). As the bone heals, the bone grows back together under the fracture treatment . It must be ensured that the two parts are in the correct position to one another. Immobilization is conservative, i.e. H. by means of a plaster cast or splint, or operationally osteosynthesis by means of a nailing or plating. If the ends of the bones are not immobilized, healing may fail and pseudarthrosis , a so-called “false joint”, occurs.

Bone diseases ( osteopathies ) and disorders of bone metabolism are:

Bones can also be affected in the context of diseases whose primary cause does not lie in the bone itself. In breast cancer and prostate cancer , metastases are often found in the bone, bone metastases . The Multiple myeloma usually leads to osteolysis . Renal insufficiency leads to increased bone loss (see chronic kidney failure ).

Use of animal bones

Cattle bones on a farm in Namibia

Animal bones, along with wood and stone, are among the oldest raw materials that humans used for the manufacture of tools and equipment such as needles and awls . In the Geißenklösterle cave, relatively well-preserved or reconstructable flutes with finger holes that are almost 35,000 years old have been discovered. Two of them are made in one piece from swan bones. Indians used the eagle bone pipe . Bone marrow was a prized food. Bones were also used as knife handles and for other stocks. Pearls, rosary beads, hairpins and combs were mainly made from bones until the Middle Ages. In China, bones, especially shoulder blades, have been used as writing material for oracle inquiries since the late Neolithic . That makes bones one of the oldest writing materials .

Bone ash (Spodium) contains calcium oxide and calcium phosphate , which were used, among other things, to give porcelain a special transparency. The terms bone china and fine bone china come from this. Animal charcoal made from bones also has various uses. Ivory or leg black are black pigments that were used in painting or as a shoe polish. The bones of animals, especially cattle , are used to produce soap or bone glue . Furthermore, bone meal is still produced today as an organic fertilizer. Bone meal has been banned as a feed additive since the advent of bovine spongiform encephalopathy (BSE).