This article covers the chip manufacturer. Further meanings for AMD under AMD (disambiguation) .

Old AMD headquarters (until the end of 2017) in Sunnyvale 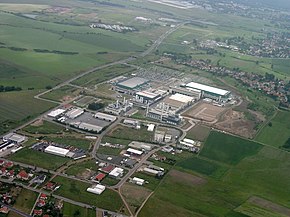 Advanced Micro Devices ( AMD ) is an American chip developer headquartered in Santa Clara , California . AMD develops and produces microprocessors, chipsets , graphics chips and system-on-chip (SoC) solutions for the computer, communications and consumer industries. AMD has been fabless since the spin-off of the actual semiconductor production in Globalfoundries in 2009 . The company has been listed in the Standard & Poors 500 share index since March 20, 2017 , employs around 11,400 people worldwide and is the second largest x86 processor manufacturer in the world after Intel (as of 2011). The company's shares were traded on the New York Stock Exchange from 1979 to 2014 and have been listed on NASDAQ since January 2, 2015 .

AMD was founded on May 1, 1969 under the name "Sanders Association" by Jerry Sanders III and Ed Turney . The start-up capital was provided by investors, including Intel founder Robert Noyce . The first integrated circuits were produced in November 1969. These formed the basis for the first self-developed product Am2501 , which came onto the market in 1970.

Expansion into countries outside the USA began in 1973, with a plant in Penang , Malaysia . In 1975, AMD started producing memory chips , and in 1979 the company went public. In the same year, a license was acquired from Intel to manufacture the 8086 and 8088 processors. When this was terminated in 1986, this led to a lawsuit, in the out-of-court settlement of which AMD was prohibited from creating replicas of Intel processors from the 5th generation (80586 - Intel Pentium ). AMD then developed its own architectures, the first being the AMD K5 . With the takeover of the CPU manufacturer NexGen in 1996, technological and personnel foundations were created for further developments. For the production of the chips, the Fab30 was opened in Dresden in 1998 and the Fab36 in 2004 . In the meantime, the CPU manufacturer Alchemy had been taken over, which produced high-end, low-power embedded processors with MIPS architecture .

In 2004, the joint venture Fujitsu AMD Semiconductor Limited, founded in 1993 with Fujitsu , was renamed Spansion . AMD and Fujitsu handed over the entire flash production to Spansion. At the end of 2005, Spansion was completely spun off as its own stock corporation, as the division suffered ongoing losses.

In 2006, AMD acquired ATI Technologies , a leading supplier of computer graphics chips at the time. In the semiconductor industry, this takeover was considered unprecedented due to the special constellations (hardly any direct competition between these companies, different research areas). With this takeover, AMD, like its main competitor Intel , can supply important computer components "from a single source".

On September 8, 2008, AMD CEO Dirk Meyer told the US business magazine Fortune that AMD would “move away from a model that is bound by its own production facilities to one that is less focused on manufacturing” (Original: “ going to go away from a captive fab model to more of a fabless model ”). The economical separation of the production facilities was on the way. In October 2008, AMD announced that it would outsource its chip fabs to a foundry operated jointly with the Abu Dhabi -based investment company Advanced Technology Investment Company (ATIC) . In March 2009, the official name of the spin-off division was announced: Globalfoundries

In January 2011 Dirk Meyer resigned from his functions at AMD. After months of provisional leadership by CFO Thomas Seifert, AMD appointed former Lenovo manager Rory P. Read as its new CEO in August 2011. Lisa Su became his successor in October 2014.

On February 29, 2012, AMD took over the microserver specialist SeaMicro in order to gain a foothold in the server market.

The following parts of this section seem since 2017 is out of date to be : too much about long set processors inside, too little new about! Also outdated information about the Ryzen CPUs / APUs.

!!! Threadripper is completely missing !!!
Please help to research and insert the missing information .

In the desktop segment, AMD has (as of 2017) to AMD Ryzen , AMD FX , the Phenom II (set), the Athlon II , the Sempron (set) and the AMD Fusion - APUs (never) to. These are available in versions with two to 64 cores. The Athlon II has to do without an L3 cache and AMD Fusion integrates the CPU, GPU, video and other hardware accelerators on a the . In the Phenom II, the 1100 models with six cores represent the top performance. The 1000 models also have six cores, but a lower clock frequency . The 900 models, on the other hand, only have four cores, the 800 series also has a smaller cache, the 700 series only three cores and the 500 series only two, as one, two or three cores have been deactivated. Not all Phenom-II, Athlon-II and Sempron models are designed for Socket AM3, whereby processors which are designed for Socket AM3 run on AM2 (+) boards, provided the mainboard manufacturer has a BIOS Update provides. Only a few Phenom II models run exclusively on AM2 (+) boards, which is based on the fact that the memory controller integrated in the CPU can only handle DDR2 main memory. These CPUs are now EOL and are no longer produced. The other part of the AMD CPUs has a memory controller that can address both DDR2 and DDR3. Among the AMD FX processors, the 9000 series forms the top performance with four modules with two cores each, followed by the 8000 series with 4 modules and 8 cores, the 6000 series with three modules and the 4000 series with two . At the end of February 2012, it was officially announced that AMD had developed the first commercially available desktop PC processor that reached a nominal clock frequency of over 4 GHz (4.2 GHz). The processor with the name FX-4170 works with four cores. In the meantime, AMD can count the first x86 processor to turbo the 5 GHz mark into its own portfolio. The processor with the name FX-9590 works with 4 Piledriver modules or 8 threads.

The Ryzen 1000 processors were manufactured using the 14 nm process, instead of structure sizes of 32 nm and 28 nm as in the previous APUs and the AMD FX processors . There are pure CPUs, but there are also APUs with integrated graphics processing units. The AM4 socket is used for the Ryzen processors . DDR4 memory is supported. Currently (as of July 2020) there are 58 models .

In the server and workstation area, AMD offers its Epyc processors.

AMD divides the notebook segment into two main areas: particularly compact “ultrathin” notebooks and “mainstream” notebooks. The area of ​​ultra-light notebooks largely includes everything under 14 inches (there are also exceptions), but should not be viewed as a “netbook”, rather it is similar to the ultrabook from Intel. The mainstream notebook sector is increasingly covered by the AMD Ryzen 4000 series (Renoir) with up to 8 cores, which came onto the market in 2020. Its predecessor, the AMD Ryzen 3000 series, has four cores. The top performance is the Ryzen 7 4800U with 8 cores and 16 threads, a base clock of 1.8 GHz and a turbo clock of 4.2 GHz and 10-25 W TDP. It is already manufactured in 7 nm at TSMC and has, among other things, an integrated Vega-8 graphic.

In addition to desktop, notebook and server processors, AMD supplies graphics chips and processors for various game consoles with the launch of the GameCube 2001 . The GameCube (2001) was followed four years later by processors for the Xbox 360 (2005), Nintendo's Wii (2006) and Wii U (2012). In 2013, AMD won the bid for two major competing platforms, the PlayStation 4 and Xbox One . 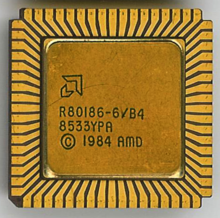 AMD has been manufacturing Ethernet ICs for a wide variety of devices since 1984 . Available network chips are based on the AMD PCnet series.