Nintendo released the GameCube with the model designation DOL-001 on May 3, 2002 in Germany . The console had been available in the USA since November 18, 2001, and in Australia since May 17, 2002. The working title was initially Dolphin , hence the serial numbers that begin with "DOL". Short-term working title thereafter was Starcube , but this was discarded a little later. In May 2004, another version of the GameCube with the model name DOL-101 appeared, which, in addition to a few other changes, made the disc slot open more quickly and offered fewer connections on the back.

Originally developed by Nintendo with the aim of leading the company back to the top of the console manufacturer, the GameCube had to take serious setbacks when it was released: The sales figures were well below those of the PlayStation 2, and with Microsoft, Nintendo also had a strong new competitor especially in the USA, Nintendo's traditionally strongest market. Another problem was the poor support from other manufacturers after the sales figures became known. This led to a further decline in sales - until the third year the sales of the Nintendo GameCube and the Xbox were roughly the same; However, from 2004 onwards, Nintendo GameCube sales dropped within a few months.

Independent developers no longer gave the console exclusive titles and Nintendo itself was busy developing games for the new handheld console, the Nintendo DS , which was launched in late 2004. The result was a persistent software lull from mid-2004 until the successor console, the Wii, was released : New games were only sparse.

To date, Nintendo has sold around 21.74 million units of the GameCube - far fewer than the competing consoles from Sony and Microsoft. According to Nintendo, the console is a flop.

Offshoots of many well-known Nintendo-exclusive game series, such as Donkey Kong , The Legend of Zelda and Super Mario , have appeared on the GameCube . In addition, some completely new game series were created, such as B. Pikmin ; in addition, Nintendo revived the Metroid series with Metroid Prime 1 and 2.

Production of the console ceased in 2007.

The GameCube is shaped like a cube and was the first Nintendo game console to use an optical data carrier, after the previous console, Nintendo 64, was massively criticized for storing games on a cartridge , which had little storage space and caused high costs.

A DVD with a diameter of 8 cm (corresponds to that of the MiniDVD ) and a capacity of 1.46 GB is used as the storage medium for the games . The incompatibility with normal DVD drives is caused by error detection codes that differ from the DVD standard; this is said to make it more difficult to make copies with standard DVD burners on MiniDVDs.

A special memory card called a memory card is used to save scores and is inserted into the front of the device. Initially, the original memory card from Nintendo had too little storage capacity to hold the status of some games, e.g. B. Save the Sims , but Nintendo later offered cards with more storage space.

Each memory block corresponds to 64 Kbit .

In addition to a digital control pad, the controller (model name: DOL-003) has two analog sticks, four action buttons and a start button that the player operates with his thumb. The controller has two analog L and R buttons on the front, but each has a digital pressure point that is activated when the buttons are fully pressed, and a digital Z button that is triggered with the right index finger. Up to four input devices can be connected to a console. The controller also has a rumble function .

The console and input devices are available in Europe and the USA in the colors purple (often referred to as indigo ), black and silver and, since the appearance of the game Mario Smash Football , also in pearl white . The purple GameCube represents the brand-defining basic product (see, for example, the publication of the first GBAs , which were also purple), followed by the black version, which was only available as an alternative design from the start.

In Japan, the colors red , starlight gold , symphonic green and spicy orange are also available. The silver GameCube was also available in a limited edition as Zelda , Mario Kart and Resident Evil 4 editions in PAL regions.

In Japan, the Triforce arcade system appeared in 2002 , which is based on the GameCube in terms of hardware.

In November 2006, the Nintendo Wii , which has been available in Europe since December 8, 2006 , was released in Japan as the successor to the GameCube . The first version of the Wii is still compatible with games and controllers for the GameCube. However, it is not possible to control them with the Wii Remote or to save the game data on the internal flash memory. Therefore a GameCube controller and a memory card are required in any case. There are connections for four controllers and two slots for GameCube memory cards behind a cover on the side of the Wii. In the two hardware revisions of the Wii (RVL-101 and Wii mini ), however, these have been removed.

Panasonic Q (SL-GC10) was an officially licensed version of the GameCube and was manufactured by the Panasonic company. The difference to the standard GameCube is that it can play video DVDs and audio CDs in addition to games. The system was sold exclusively in Japan and went on sale in December 2001 for 39,800 yen .

Nintendo had signed a contract with Panasonic for the delivery of the laser units for the GameCube. That contract also stipulated that Nintendo would give Panasonic permission to manufacture DVD players that could read GameCube games.

Rear of the Panasonic Q with the additional connections

Another feature of the Panasonic Q was its backlit liquid crystal display and the drawer common to DVD players. In addition, the Panasonic Q had an optical 5.1 Dolby Digital and a separate subwoofer output. The case was made of metal. Extensions made for the normal GameCube also worked with the Panasonic Q. The only exception was the Gameboy player, which could not be used on the Panasonic Q due to the feet. However, there was a specially made “Panasonic Q Game Boy Player” with the model designation SH-GB10.

Due to the comparatively high price and sluggish sales, production was stopped two years later in December 2003.

The Panasonic version also has three cinch outputs for composite video and stereo sound, S-video and the "digital AV-out" connection already known from the normal GameCube.

Nintendo offered a separately purchased Wavebird controller ( stylized as WAVEBIRD, model name: DOL-004) and thus established the wireless controller , which was wireless and, in contrast to the infrared technology that was known up to then, more convenient because it even enabled functional game control through solid walls.

A microphone with the model designation DOL-022 is supplied with the games Mario Party 6 , Mario Party 7 and Odama . This allows parts of these games to be controlled by voice input. Odama also contained a holder (DOL-025) that allows the microphone to be attached to the controller. The microphone is connected to the B port of the memory card.

Especially for the horror game Resident Evil 4 , Capcom developed a controller that looks like a chainsaw .

An official dance mat (DOL-024) has been supported since the Mario version of Dancing Stage .

Like the competing consoles, the GameCube also supported online gaming. Nintendo began selling additional hardware in spring 2003. To establish an Internet connection, a separately available modem with the model designation DOL-012 or a broadband adapter with the model designation DOL-015 had to be used on the underside of the console . However, there were only three games that supported the online function of the GameCube: Phantasy Star Online I & II , Phantasy Star Online III CARD and Homeland, which was only released in Japan . The servers for the two Phantasy Star online games were shut down on March 31, 2007, and only one month later, on April 30, 2007, Homeland also experienced the same fate. However, it is possible to continue playing the Phantasy Star online parts online via private servers.

The online function of the GameCube was generally seen as a failure. This was mainly due to the lack of distribution of online accessories, which was made difficult from the start by the insufficient supply of suitable software. At the start of the online accessory, only one online capable game was available, Phantasy Star Online Episode I & II, which had already appeared two years earlier at Dreamcast.

The broadband adapter also supports network games , one such LAN mode is in Mario Kart: Double Dash !! , Need for Speed: Most Wanted , Kirby Air Ride and 1080 ° Avalanche available. For these games, which can be played in the LAN but not over the Internet, fans developed the tunneling program called Warp Pipe independently of Nintendo , which can make LAN games Internet-compatible with moderate loss of quality. The XLink software also allows GameCube LAN games to be played over the Internet.

In contrast to the NTSC version of the GameCube, which only displays the image via S-Video , the PAL version of the GameCube also offers an RGB signal for clearer and sharper image display. However, an RGB cable is required for this. The official GameCube RGB cable with the model designation DOL-013, unlike third-party products, does not have separate connections for a music system.

The software of the PAL version of the GameCube does not support a full screen process . Nintendo sold a component cable for the digital AV-out connection on the US and Japanese markets , and a third-party European manufacturer produced a modified RGB cable for this purpose. To use it, the B button had to be held down when starting the GameCube. The digital AV output was no longer integrated worldwide in later revisions of the GameCube with the model designation DOL-101.

Cable to connect the GameCube to the Game Boy Advance

With the help of a special connection cable ("DOL-011") a Game Boy Advance / (abbreviated: GBA) can be connected to the GameCube and used as a controller in certain games. Depending on the game, further information is then displayed on the GBA screen, sometimes even completely new game functions or game modes. The Game Boy Micro cannot be used with the connection cable.

With the appearance of the online title Phantasy Star Online (published in Europe on March 7, 2003) it became possible for private individuals to run unlicensed software on the GameCube for the first time. The game could reload program parts from the central game server in online mode. Software for the PC could now simulate this game server and send its own program to the GameCube, which was then executed. A cryptographic signature was not used there, only an encryption that could be bypassed, whereupon this path was later also used to play copies made illegally by streaming and patching the data via the network adapter.

The GameCube did not have the first modchip that made this possible until the end of 2004. Most recently, homebrewing was possible on the GameCube using a device called the SD Media Launcher (Datel Electronics). The software is loaded using a start CD from an SD memory card, which is located in an adapter in the slot for the GameCube memory cards.

The Dolphin software is an emulator that can emulate the Nintendo GameCube and the Wii on a computer or smartphone .

Over 350 games are available for the GameCube, some of the best known include a .:

View of the GameCube's processor 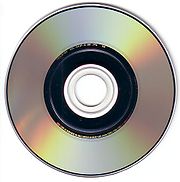 GameCube disc with a storage capacity of 1.46 GB