Which input devices can be used in a particular game is usually determined by the platform on which it is based (computer or game consoles) and the interfaces available there . In the past, game controllers were primarily connected to the computer via the game port , which has now largely been replaced by USB , which is also increasingly used in the console sector.

There are different types of game controllers, which are equipped differently depending on the purpose.

Gamepads or joypads, also known colloquially as pushers, are usually the primary control devices in modern game consoles. They are usually held in both hands and operated with your fingers. Traditionally, gamepads have several action buttons on the front, on the shoulders and sometimes on the back. For this purpose, modern gamepads have one or two analog sticks on the front, each operated by a thumb. Older models already had a control pad that performed similar functions as the analog stick on more modern gamepads. Analog sticks and control crosses are mostly used for motion control. In modern gamepads, in addition to the analog sticks, the control pad in many games does not act as a movement control, but takes on other functions. Modern gamepads often have an integrated rumble motor for force feedback .

Due to their ease of use, gamepads are often popular alternatives in the computer sector, where the mouse and keyboard are the main input devices.

Joysticks are game controllers that usually have an analog stick or throttle and one or more fire buttons that can be tilted around an axis in several directions. They can be operated with one hand and are used, for example, in flight games. In addition to tilting, many joysticks can also rotate around their own axis. There are several buttons on the joysticks. Most of the time, there is a button that is modeled on a gun trigger on the back of the stick. It is operated with the index finger. On the front there are buttons that can be operated with the thumb. Some versions have additional buttons on the base of the device that can be operated with the second hand and possibly a power lever that can be continuously adjusted. Changes in the inclination of a joystick are recorded either analog or digital. A well-known joystick is, for example, the Competition Pro .

The mouse and keyboard are usually the primary input devices in computers. In addition to being used for office work, they are also suitable for playing.

The keys W, A, S and D, as well as the arrow keys, are of particular importance in games with keyboard use, as they are used for movement control in the vast majority of games.

Nowadays, computer mice have, in addition to the left and right buttons, a mouse wheel for infinitely variable control and other buttons that are often attached to the side of the mouse. 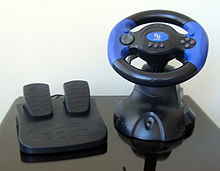 A lightgun is an expansion device for aiming at targets on the screen and its design is mostly based on ballistic weapons.

Lightguns are mostly used in shooting games. For this purpose, the light gun is aimed at a certain area on the screen. In order to fire shots at the targeted target in the game, light guns have at least one button to fire.

Typical game controllers for dance and music games , which are available in different designs for a wide variety of purposes.

The player has to operate certain zones on the dance mat at the right moment, usually in a rhythm, with one or both feet. Most dance mats have between four and nine fields and often have arrows for up, down, left and right.

There are several musical instruments that are used as controllers. For example there are guitars, drums, microphones and turntables for DJ games.

A trackball consists of a housing to which a ball is attached, which is usually moved with a finger. The rotation of the ball is converted into a motion control signal.

A paddle is an analog controller that is practically out of use these days. It usually consists of a rotary knob and one or more buttons. 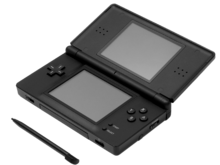 A touchscreen is an input device in which the user interacts directly with the screen. The entry is made by touching a certain area on the screen.

Touchscreens are currently used primarily in tablet computers and smartphones , which are always playing an increasingly important role in the field of computer games. In the classic game consoles, touch screens are mainly used on the Nintendo DS , Nintendo 3DS , PlayStation Vita , Wii U and Nintendo Switch .

Some systems also use an input pen , which can sometimes be used as an alternative to finger touch, as is the case with the Nintendo DS / 3DS consoles.

With motion control, the movements of a person are recorded using one or more sensors. Possible sensors can record and interpret optical signals or record the movement based on the movement of the sensor. In 1993 Sega launched the Sega Activator for Sega Genesis . This measures the player's kicks and punches using infrared sensors. In 2003, EyeToy, a camera for the PlayStation 2, recorded the player's movements.

Motion detection is a key feature of all game consoles from the seventh generation . Systems of the individual providers are here:

One of the simplest components of a key (engl. Button , button '), the "activated" and between "not activated" differs. This component can usually be found on joysticks and gamepads and occurs there several times. In recent years, a gradation between the two previous states has also become established. In racing games , for example, it is possible to vary the braking force or just apply the throttle slightly. Such buttons are analog versions. 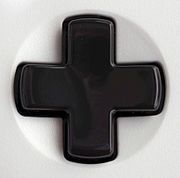 A control pad effectively consists of four digital buttons that are arranged in a diamond shape and overlaid by a cross shape. The directional pad is conventionally assigned to directional inputs and is usually located on the left on gamepads and handheld consoles .

Since Nintendo registered a patent on the directional pad in 1985, which expired in the USA in 2005, older models from other game controller providers deviate from the cross shape .

The analog stick in its current form is a small, protruding pen with a coin-sized thumb rest. It can be tilted in any direction up to a fixed angle; without activity it strives back to its middle position. Its sensors transmit the angle and direction of inclination at all times. The analog stick is a variation of the joystick that was used in the early stages of the first generation of consoles. With the failure of the Atari 5200 , it went out of fashion for a short time due to the introduction of the digital control pad (D-Pad). Only in the version of the Nintendo 64 did it replace the D-Pad as the primary direction input, especially for 3D games. As of 2016, common gamepads have a control pad in addition to a second analog stick.