This article explains the basics of all computers. For the type of the currently most widespread computer, see Personal Computer .

Charles Babbage and Ada Lovelace apply by designed by Babbage 1837 Abacus Analytical Engine as a pioneer of modern universal programmable computer. Konrad Zuse ( Z3 , 1941 and Z4 , 1945) in Berlin, John Presper Eckert and John William Mauchly ( ENIAC , 1946) built the first functional devices of this kind. When classifying a device as a universally programmable computer , Turing completeness plays an essential role Role. It is named after the English mathematician Alan Turing , who introduced the logical model of the Turing machine in 1936 .

The early computers were also called (large) computers; their input and output of data was initially limited to numbers. Modern computers know how to handle other data, for example letters and sounds. However, this data is converted into numbers within the computer and processed as such, which is why a computer is still a calculating machine today.

With increasing performance, new areas of application opened up. Today computers can be found in all areas of daily life, mostly in specialized variants that are tailored to a given application. Integrated microcomputers ( embedded system ) are used to control everyday devices such as washing machines and video recorders or to check coins in vending machines; In modern automobiles , for example, they are used to display driving data and control various maneuvers themselves in " driver assistants".

Universal computers can be found in smartphones and game consoles . Personal computers (English for personal computers, as opposed to the mainframe computers used by many) are used for information processing in business and authorities as well as for private individuals; Supercomputers are used to simulate complex processes, e.g. B. in climate research or for medical calculations.

The German term calculator is derived from the verb to calculate . For etymology see arithmetic # etymology .

The English term computer was originally a job title for auxiliary staff who carried out recurring calculations (e.g. for astronomy , for geodesy or for ballistics ) on behalf of mathematicians and thus made tables such as B. filled a log table.

In early church history , the Jewish calendar was replaced by the Julian calendar . The resulting difficulties in calculating the Easter date lasted until the Middle Ages and were the subject of numerous publications, often titled Computus Ecclesiasticus . But there are other titles, e.g. B. by Sigismund Suevus 1574, who deal with arithmetic questions. The earliest text in which the word computer is used in isolation dates from 1613.

In the newspaper The New York Times , the word first appeared on May 2, 1892 in a small display of the United States Navy, entitled A Computer Wanted , wanted a computer ' on, in the knowledge of algebra , geometry , trigonometry have been provided and astronomy .

Ballistic tables were calculated on behalf of the United States Army at the University of Pennsylvania in Philadelphia. The result were books for the artillery that predicted the trajectories of different projectiles for different guns. Most of these calculations were done by hand. The only help was a tabulator that could multiply and divide. The employees who calculated there were called "computers". The term was first used in 1946 for a technical device in the Electronic Numerical Integrator and Computer (ENIAC) developed there . The term has been used in Germany since 1962.

A digital computer initially only consists of hardware. First of all, the hardware provides a memory in which data can be stored in portions, like on the numbered pages of a book, and can be called up at any time for processing or output. Second, the arithmetic logic unit of the hardware has basic building blocks for free programming, with which any processing logic for data can be represented: These building blocks are in principle the calculation , the comparison and the conditional jump . For example, a digital computer can add two numbers, compare the result with a third number, and then continue at either one or the other point in the program depending on the result. In computer science , this model is theoretically represented by the Turing machine mentioned at the beginning ; the Turing machine represents the fundamental considerations for predictability .

However, it is only through software that the digital computer becomes useful. In principle, every software is a defined, functional arrangement of the above-described components calculation, comparison and conditional jump, whereby the components can be used as often as desired. This arrangement of the building blocks, known as a program , is stored in the form of data in the computer's memory. From there it can be read out and processed by the hardware. This working principle of digital computers has not changed much since its origins in the mid-20th century, although the details of the technology have improved considerably.

Possible uses for computers are:

The principle generally used today, which, after its description by John von Neumann in 1946, is called the Von Neumann architecture , defines five main components for a computer:

In today's computers, the ALU and the control unit are usually merged into one component, the so-called CPU (Central Processing Unit, central processor ).

The memory is a number of numbered, addressable “cells”; each of them can hold a single piece of information. This information is stored in the memory cell as a binary number , i.e. a sequence of yes / no information in the sense of ones and zeros.

In the Von Neumann architecture, the control unit is responsible for memory management in the form of read and write access.

Finally, the input / output units are responsible for entering the initial programs into the memory cells and displaying the results of the calculation to the user.

The Von Neumann architecture is, so to speak, the lowest level of the functional principle of a computer above the electrophysical processes in the conductor tracks. The first computers were actually programmed in such a way that the numbers of commands and of certain memory cells were written one after the other into the individual memory cells as the program required. Programming languages ​​have been developed to reduce this effort . These automatically generate the numbers within the memory cells, which the computer ultimately processes as a program, from text commands that also represent semantically understandable content for the programmer (e.g. GOTO for the "unconditional jump").

Later certain repetitive procedures were combined in so-called libraries in order not to have to reinvent the wheel every time, e.g. E.g. interpreting a pressed keyboard key as the letter "A" and thus as the number "65" (in ASCII code). The libraries were bundled in higher-level libraries, which link sub-functions to complex operations (example: the display of a letter "A" consisting of 20 individual black and 50 individual white dots on the screen after the user has pressed the "A" key) .

In a modern computer, many of these program levels work above or below one another. More complex tasks are broken down into sub-tasks that have already been processed by other programmers, which in turn build on the preparatory work of other programmers whose libraries they use. At the lowest level, however, there is always what is known as the machine code - the sequence of numbers with which the computer is actually controlled.

A computer system is called:

→ Main article : History of the computer

Based on how the computer works

Based on the size

Even more important in less developed countries: a computer course in East Timor

A megatrend is currently (2017) the development of artificial intelligence . These simulate the processes in the human brain and thus create self-learning computers that are no longer programmed as before, but are trained with data similar to a brain. The point at which artificial intelligence outperforms human intelligence is called technological singularity . Artificial intelligence is already used today (2017) in many applications, including everyday ones (see Artificial Intelligence Applications ). Hans Moravec put the computing power of the brain at 100  teraflops , Raymond Kurzweil at 10,000 teraflops. Supercomputers have already clearly exceeded this computing power . For comparison, a graphics card for 800 euros (5/2016) has a performance of 10 teraflops.

The worldwide web search for the term “computer” has been steadily decreasing since the statistics began in 2004. In the ten years up to 2014, this number had fallen to a third. 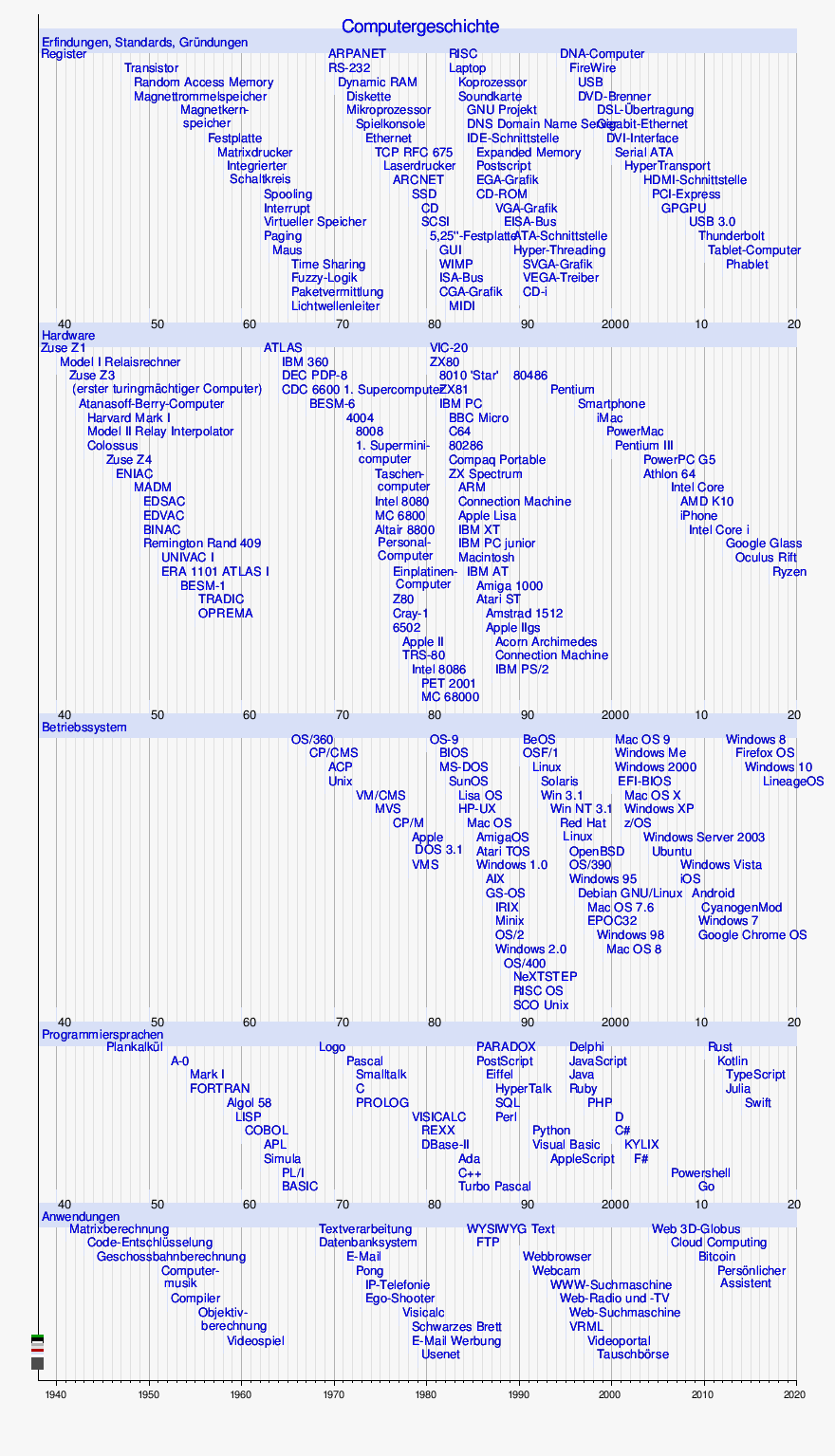 The following parts of this section since 2012 seem out of date to be : Table
Please help with to the missing information research and insert .

Sales figures and market shares of the computer manufacturers according to information from the market research company Gartner Inc. , based on sales figures of desktop computers , notebooks , netbooks , but without tablet computers , to end consumers:

Wikinews: Portal: Computers  - in the news