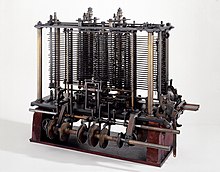 Experimental model of the analytical engine 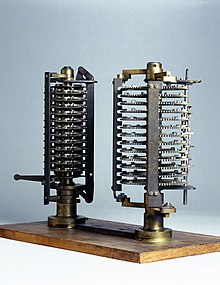 Experimental models of the Analytical Engine, 1870.

The Analytical Engine ( English for analytical machine ) is the design of a mechanical calculating machine for general applications. It comes from the British mathematics professor Charles Babbage (1791–1871) and represents an important step in the history of the computer . There are tables as programs ; a theorem from 1837/38 has been preserved and already contains the example for the solution of a system of linear equations, as published by Federico Luigi Menabrea in 1842 and Ada Lovelace in 1843; of the latter is probably the example of the calculation of the Bernoulli numbers.

Babbage began building his Difference Machine, a mechanical calculating machine specifically designed for solving polynomial functions , in 1822 . When he realized that a much more general design would be possible, he designed an analytical engine , the description of which he published in 1837. He continued working on the design until the end of his life. It is now generally accepted that the design was correct and that the analytical engine would have worked. Comparable computers for general purposes were not realized until a century later.

The analytical engine was to be powered by a steam engine, consist of 55,000 parts and be nineteen meters long and three meters high. The input (commands and data) should be made via punch cards , a method that was used at that time to control mechanical looms . A printer, a curve plotter and a bell (as a signal to the operator) were planned for the output. The machine should also be able to punch numbers in punch cards or optionally metal plates. She used decimal fixed point numbers , and Babbage made various designs that provided for a “working” memory of 100 or 1000 words with - depending on the source - 40 to 50 decimal places, which corresponds to about 1.6 to 20  kB . Each decimal place is represented by a gear. Babbage considered more decimal places to be unnecessary for the time being, quote: The result of my reflections has been that numbers containing more than thirty places of figures will not be required for a long time to come. The arithmetic unit ( English mill for "factory") should master the four basic arithmetic operations.

The intended programming language was structured similarly to the assembly languages used today . Loops and conditional branching would have been possible, so that the first universally programmable ( Turing-powerful ) system would have emerged. Three different types of punch cards were provided: one for arithmetic operations, one for numeric constants and one for load and store operations in order to transfer numbers from the memory to the arithmetic unit and back again. Three separate punch card readers would probably have been used for the three card types. Babbage himself wanted to add further mathematical functions to the machines, such as extracting roots or trigonometric functions.

In 1837 Babbage published the first descriptions of his analytical engine . Due to financial and technical problems, only a few components were actually built.

In 1842, the Italian mathematician Federico Luigi Menabrea , who had met the traveling Babbage in Italy, wrote a description of the Analytical Engine in French. Ada Lovelace translated them into English. When Babbage asked why she had not written her own essay, she commented on her translation so extensively that it was three times the length of the original article. Because she also published a written plan for calculating Bernoulli numbers with the machine, she is also called the "first woman programmer" in history.

In 1878 a committee of the British Association for the Advancement of Science recommended that the Analytical Engine not be built.

In 1910, Babbag's son, Henry P. Babbage, reported that part of the arithmetic logic unit and printer had been built and used to compute a (flawed) list of multiples of pi . This was only a small part of the whole machine, not programmable and without memory.

After that, the machine, whose design plans are considered functional, fell into oblivion.

1941 was Zuse Z3 of Konrad Zuse , who was actually built the first universal programmable computer and worked. It was not until 1960 that computers reached the level of accuracy required by Babbage (50 decimal places are approx. 166 bits or 20 bytes). Howard Hathaway Aiken , who built the Mark I electric calculating machine in 1943-44 , was influenced by the structure of the Analytical Engine .

"Once an analytical engine exists, it will necessarily guide science in the future."