A fixed point number is a number that consists of a fixed number of digits . The position of the comma is fixed, hence the name. 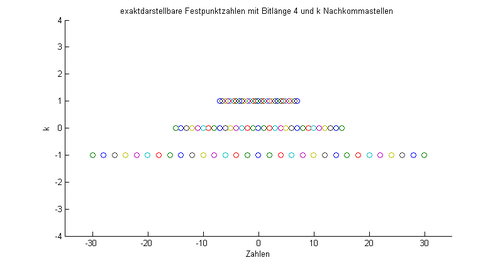 The basic idea behind it is the information technology representation of a section of the rational numbers . This mapping to a data type of limited size , typically integers of different bit widths, requires a fixed number of digits for the part before and after the decimal point. Usually, according to the definition, the first digits are pre-decimal places and the remaining decimal places . In computer science, both decimal and binary fixed-point numbers are of great practical importance.

Advantages and disadvantages compared to a floating point number

The fixed position of the decimal point means that there is no computational effort compared to calculating with floating point numbers . If a binary fixed-point representation is selected in a computer program , the multiplications and divisions necessary for conversion and correction can also be replaced by fast shift operations. An example of an application that was specifically designed with fixed point arithmetic for reasons of computational effort is z. B. Fractint , a fractal generator . Since the mid-1990s, processors have had dedicated floating-point calculators, which make the calculation of fractals with floating-point numbers faster than that with integers.

All binary fixed point numbers of length and places in front of the decimal point with :

Note that each of the four listed binary patterns stands for three different numbers, depending on where the comma is placed. Since the number of places in front of the decimal point is already fixed by definition, it is unnecessary to write or save the usual comma, i.e. H. the representation is always that of the "binary pattern" column.

In the case of the calculation with fixed point numbers, the binary patterns are processed in the same way as in the case of the calculation with whole numbers . Fixed point arithmetic can therefore be performed by any digital processor that supports arithmetic operations on integers. However, there are a few rules that apply to the position of the comma before and after the arithmetic operation:

In the fixed point representation:

Here the result is not a fixed-point number based on the same criteria as the two factors; a correction is necessary (here: division by 100).

The result here is not a fixed-point number based on the same criteria as dividend and divisor; a correction is necessary (here: multiplication by 100).

Example in binary 8-bit representation with 4 decimal places and shift operation, such as B. is used in computer architectures

Calculation in the 8-bit fixed point representation with 4 decimal places:

Result in the fixed point representation:

Incorrect representation of the decimal point, therefore the shift operation is necessary:

The result would be according to the 8-bit fixed point representation with 4 decimal places:

The result after the correction now corresponds to the expected result.

As you can see, only fixed-point numbers between and (with a resolution of ) can be represented with eight bits and four places before and after the decimal point . This small display area is also the decisive disadvantage compared to floating point numbers .

Nomenclature of the number format

The use of decimal fixed point numbers is particularly useful for amounts of money. For example, if a certain invoice amount is paid first with a down payment and later with a final payment, when floating-point numbers are used, rounding errors may result in a remaining amount or credit far below the smallest currency unit. Corresponding orders in a database would later be found by searching for orders that have not been fully paid (i.e. with the remaining amount not equal to 0), since the remaining amount is very small, but not 0.

In most programming languages ​​and databases, there is a data type called Currency , Money or Decimal . It is based on a signed integer , usually 64 bits long. Allocation, addition and subtraction of two such data types with one another take place as with an integer, as well as multiplication of fixed-point numbers and integers and rounding-off division of a decimal fixed-point number by an integer. For other operations, which may also be lossy, the computer must consider the number of decimal places. This can be freely defined in some languages. If this is not the case, the data type usually has four decimal places and could informally be referred to as the ten-thousandth. Currency sub-units currently available in the world in addition to the widespread hundredths are fifths ( Mauritania and Madagascar ) and in the MENA region thousandths (see decimal currency ), which can thus be represented. The range of values ​​of a 64-bit number with four decimal places is −922,337,203,685,477.5808 to 922,337,203,685,477.5807. That is around ten times the global economic output in dollars in 2017. A 32-bit number with four decimal places, for example called smallmoney (literally: small money) in T-SQL , allows numbers from −214,748.3648 to 214,748.3647.