Symbols of the four basic arithmetic operations: plus , minus , times and divided .

Of the four basic arithmetic operations, addition and multiplication are regarded as basic operations and subtraction and division as derived operations. A number of calculation rules apply to the two basic operations , such as the commutative laws , the associative laws and the distributive laws . In algebra , these concepts are then abstracted so that they can be transferred to other mathematical objects .

If there is no need to distinguish between multiplier and multiplicand, both are often referred to collectively as factors .

Division is the process of dividing one number by another number. The operator for the division is the divided sign  : (or /), the two operands are called dividend and divisor , the term quotient and the result is called the quotient value / value of the quotient:

However, the result of dividing two natural or whole numbers is only a natural or whole number again if the dividend is a multiple of the divisor. Otherwise you get a fraction . In order to be able to carry out the division without restrictions, the number range is therefore expanded to include the rational numbers . The division by zero , however, can not be meaningfully defined. The division of large numbers can be done by hand using the written division . 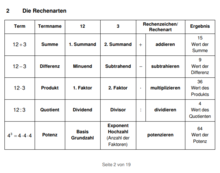 The basic arithmetic operations are dealt with in mathematics lessons during the first years of school . In elementary school ( primary level ) arithmetic is first taught with small natural numbers and later expanded to include larger numbers. Lessons also include the multiplication tables, division by remainder , solving simple equations and the rule of three . There are mental arithmetic , written arithmetic, rollover calculations and applications in the form of word problems practiced. Simple calculation laws are used for advantageous calculation. In the first years of a secondary school ( secondary level I ) negative numbers are also considered, fractions and thus rational numbers are introduced, and the laws relating to the connection of the four basic arithmetic operations are dealt with.

Illustration of the commutative laws

The following are , and numbers from the underlying number range. The commutative laws apply to addition and multiplication

that is, the result of a sum or a product is independent of the order of the summands or factors. Next apply associative laws

When adding or multiplying several numbers, it does not matter in which order the partial sums or partial products are formed. Therefore the brackets can be omitted from totals and products. In addition, the distributive laws apply

These laws do not apply to subtraction and division, or only to a limited extent. Further calculation rules, such as dot before line , the rules in brackets and the laws of fractions , can be found in the arithmetic formula collection .

The subtraction of a number is now defined as addition with the opposite number and division by a number as multiplication with the reciprocal value :

In algebra , these concepts that were initially created for arithmetic are abstracted in order to be able to transfer them to other mathematical objects . An algebraic structure then consists of a set of carriers (here a set of numbers) and one or more links on this set (here the arithmetic operations) that do not lead out of it . The various algebraic structures then differ only in terms of the properties of the links (the rules of calculation), which are defined as axioms , but not in terms of the concrete elements of the set of carriers. The following algebraic structures are obtained for the basic operations:

According to the principle of permanence , all calculation rules of a basic structure (here a simple number range with the basic operations) also apply in a correspondingly more specific structure (here an extended number range with the same operations). This structuring and axiomatization now makes it possible to transfer knowledge gained from numbers to other mathematical objects. For example, corresponding operations at are vectors the vector addition and matrices , the matrix addition . Special structures arise when considering finite sets , for example remainder class rings as a mathematical abstraction of a division with remainder .

All four basic arithmetic operations were already known in ancient Egyptian mathematics and in Babylonian mathematics . However, multiplication and division were not arithmetic operations in their own right. The multiplication of natural numbers was traced back to the continued doubling ( duplication ) of a factor and subsequent addition of the partial results. In the case of non-integer quotients, the division was carried out approximately by means of continued halving ( mediation ). Multiplication and division can only be found as independent operations in ancient Greek mathematics , for example in Euclid and Pappos .

In the arithmetic books of the Middle Ages there were further additions to the basic arithmetic operations, which were called "species" there. Around 1225, Johannes de Sacrobosco found a total of nine of these species: Numeratio , Additio , Subtractio , Duplatio , Multiplicatio , Mediatio , Divisio , Progressio and Radicum extractio . The Numeratio dealt with counting, reading and writing numbers, the Progressio was the summation of successive natural numbers and the Extractio only included the taking of square roots. It was only in 1494 rejected Luca Pacioli the Duplatio and Mediatio as special cases of multiplication and division again. This was followed by further reductions until Gemma Frisius in 1540 was one of the first authors to limit the basic arithmetic operations to the four known.