A link is commutative if it always holds. This figure uses the idea of ​​an operation as a machine that turns two inputs into one result. If the link is commutative, then it doesn't matter in which order the inputs and occur - the result is the same as .

The commutative law ( Latin commutare "to swap"), in German law of exchange, is a rule from mathematics . If it holds, the arguments of an operation can be swapped without changing the result. Mathematical operations that are subject to the commutative law are called commutative.

The commutative law forms the basic rules of algebra with the associative law and the distributive law .

Let there be and quantities. A binary connection is called commutative if the equality applies to all . 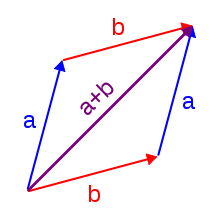 The vector addition is commutative because is.

The addition of natural numbers is commutative.

For real numbers it always holds

The oldest known form of the commutative law of addition is the Sumerian fable of the clever wolf and the nine stupid wolves .

In set theory , union and intersection are commutative operations; for sets the following always applies:

In contrast, the difference is not commutative. and so are sometimes different amounts, e.g. B. for and , because then would be and .

The addition of matrices over a ring or body is commutative. The matrix multiplication is not commutative, however: Although the factors are sometimes, but not always interchangeable.

In general, a group in which the connection of group elements is commutative is called Abelian .

In propositional logic applies to the connectives :

Further examples of non-commutative operations are the cross product in vector spaces or the multiplication of quaternions .

Commutativity is also an important basic property in quantum mechanics , the commutation of two observables physically means that they can be measured precisely at the same time. Not all observables commute.

In some structures with two operations, for example the cross product in vector spaces, the commutative law does not apply, but instead a kind of opposite of it:

More generally, the product on a Lie algebra written as satisfies anti-commutativity.

The Flexibility Act offers an alternative possibility of "bracketing" for a link :