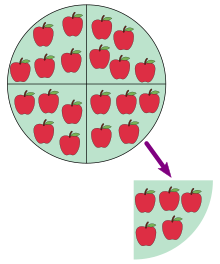 The Division is one of the four basic arithmetic operations of arithmetic . It is the reverse of multiplication . The division is also known colloquially as dividing . A dividend is divided by a divisor, the result is called the quotient. The long division is the method of sharing with pen and paper. It is taught in primary school lessons. The arithmetic symbol for the division is , or (divided symbol ).

In order to be able to discuss division as the well-known basic arithmetic calculation, one needs a mathematical structure that knows two links (arithmetic operations), called addition and multiplication. The two links interact with each other according to the rules of the mathematical ring . The multiplication defines the division as the associated reverse operation. Addition is required as an additional basic arithmetic operation because it defines, for example, zero (0) as the neutral element belonging to it .

comment
In the known from school mathematical structures of the integers of the rational numbers of real numbers and the complex numbers is mathematical rings.

Parts or dividing means to a given number (the known factor of) an appropriate number (the unknown factor) to find, so that the multiplication of a desired product gives: find, for a given and one such that .

If you limit yourself to whole numbers , this is not always possible (see divisibility ).

In bodies , for example in the body of rational numbers or in the bodies of real numbers and complex numbers , the following applies:

For every number and for every non-zero number, there is exactly one number that satisfies the equation .

The division is therefore the reverse of the multiplication to determine this . One writes

Neither the commutative law nor the associative law applies to division . However, it can be traced back to multiplication because it holds

It can therefore be advantageous to write the division as a multiplication with the reciprocal value , since the multiplication is both associative and commutative and thus allows easier and less error-prone reshaping. For the division, however, the second distributive law applies with addition and subtraction , that is

If there are several successive divisions in one line, the order is processed from left to right; the division is therefore left-associative :

Arithmetic division by zero is not possible

Example from a pastry shop: If you want to split a cake between zero people, how much of the cake does each person get?

It is not possible to answer the question as there is no one to get the cake. If you translate this question into the language of mathematics and abstract from all possible extra-mathematical meanings, the clear question “How do I distribute something to 0 places?” Becomes the purely mathematical problem “How do I divide by 0?”.

Let be a ring with zero element . With "Division by zero" the known factor (divisor) is asked:

Is there a solution to the equation for an element

If the zero ring , i.e. consists of the only element 0, then the equation has the solution because it is because there is nothing else, and thus as required. Moreover, is the only solution.

In the following, it is generally assumed that it has at least 2 different elements, which is the case, for example, with a body by definition .

Find solutions to the equation for a ring element .

For a ring member , the equation is not solvable , not in and not in an extension ring . Because, as shown in the article Ring (Algebra) , it follows from the ring axioms , essentially the distributive law :

The neutral element of the addition of a ring is an

annulator with for each ring element .

Although the above equation has a solution in the case of each ring element , specifying a particular one of them (“making the division unique”) would lead to problems. When settling, for example, you choose a ring element . (This is possible because it has at least 2 elements.) The associative law of multiplication would result in:

which would contradict the choice .

As a result, this means that quantities which, when they are added and multiplied , know a “division by zero” in any form ( infinite , undefined , NaN or whatever ) cannot be rings (let alone bodies) because the ring properties cannot for the quotients with divisor zero - and therefore not  valid for all elements .

Division by zero in the computer

Especially when you spontaneously use a computing device, it can happen that you divide by zero . The goal of the implementations is then

If an "overflow" occurs during a floating point operation , i. H. the result is too large in terms of amount to be displayed if it is set to a very large floating point number with the meaning "infinite". A floating point division by zero is also often treated in this way. B. from the very popular IEEE 754 standard . A flag is also set so that exception handling can be programmed. (The article Permanence Principle discusses various concepts of how a “division by zero” could be defined with the least possible waiver of calculation rules, e.g. ring axioms and order relations.)

Graph of the function .

Some people believe that the solution of dividing by zero must be infinite , since experience shows that the individual gets more and more the fewer there are with whom he has to share something. But

In the area of ​​whole numbers, the following applies: A division can only be fully carried out if the dividend is an integral multiple of the divisor. In general, however, the division is not completely feasible, that is, there is a remainder.

There are several ways of writing the division: or or or

The colon as a symbol for division has only been common practice since Leibniz (1646–1716), although it is also known in older writings. William Oughtred introduced the notation in his Clavis Mathematicae of 1631.

The notation is also called fraction representation or fraction for short . Fractional notation is only unique for commutative multiplication; this plays a role in more general mathematical structures, as mentioned below under “Generalization”.

In abstract algebra defining algebraic structures , the body are called. Bodies are characterized by the fact that division (except by 0) is always possible in them. The division takes place here by multiplication with the inverse element of the divisor.

In more general structures (with non-commutative multiplication) a distinction has to be made between left division and right division. The (non) validity of the associative law also has an influence on the properties of quotients.

In Austria, a distinction is occasionally made between trade fairs (how often does it go in ...?) And parts (how much does it result in divided by ...?).

Until the 1970s, a distinction was occasionally made between dividing (in groups) (Austrian fairs ) and distributing in German primary schools .